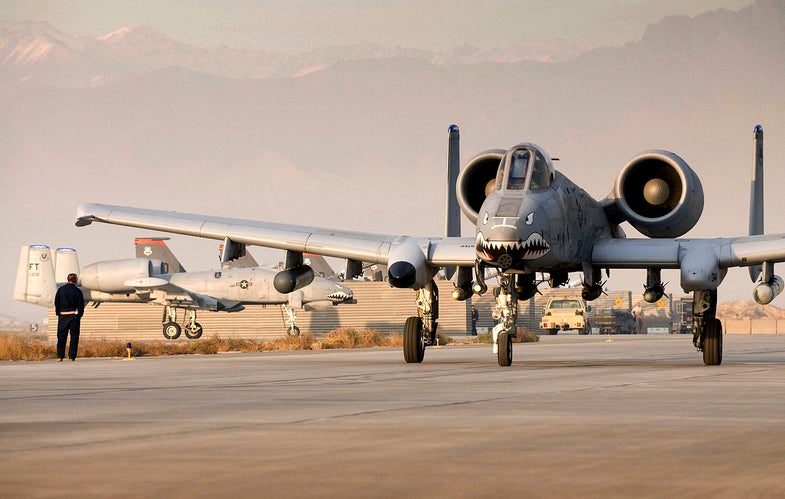 A-10s don’t need any help being deadly. The venerable tank hunter, built in the 1970s around a giant gun, and designed to shred Soviet tanks in a European land war, is as lethal a craft as any flown by the Air Force. There is no doubt that the A-10 is plenty capable of destroying any of the ground-based targets it encounters. A new laser guided precision rocket doesn’t change that. Instead, it offers another deadly option from a set of already-deadly tools, allowing a somewhat more precise calibration of mayhem.

The new weapon is the Advanced Precision Kill Weapon System, or APKWS, a rare military acronym that not only doesn’t spell anything, but doesn’t have an easy phonetic adaptation: HMMVV this isn’t. Made by the British-based BAE Systems, the system screws into an existing rocket body, adding stubby little wings and sensors.

Programed to a laser designator, the guided rocket flies to its marked target. It is made for lightly armored vehicles and posts — think souped-up Toyotas or machine gun emplacements with sandbags, not heavy tanks.

The rocket is already used by attack helicopters like the AH-64 Apache. Recently, the U.S. Air Force equipped A-10s and the versatile F-16 fighters with the rockets for use in Iraq and Afghanistan. While all the tools in the A-10s toolbox remain hammers, they now have a the option of a smaller hammer, for particularly small nails.

Watch a video about the system from BAE systems below: