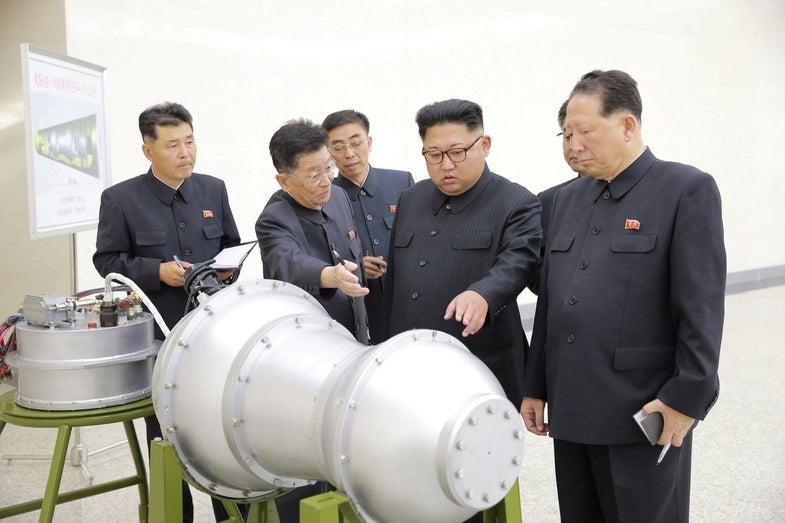 This peanut-shaped vessel could contain a bomb ten times as powerful as the one dropped on Hiroshima. KCNA, via DPRK Today
SHARE

Over Labor Day weekend, North Korea unveiled a new weapon. It is small, maybe small enough to fit in the nose cone of a missile. It is powerful, detonating with the force of possibly 140 kilotons, or almost 10 times the destructive power as “Little Boy,” the bomb dropped on Hiroshima in 1945. This thermonuclear warhead is shiny, bare metal like the naked skins of the early jets that first fought in the skies above Korea almost 67 years ago.

Hours before the test, North Korea’s Korean Central News Agency revealed pictures of the peanut-shaped device, made up of twin spheres encased together. On the wall behind the scientists and North Korean dictator Kim Jong-un is a diagram of the peanut inside a missile. While analysts set to work, deciphering and deriving what they could from the visible information in the picture, the DPRK did not wait long before confirming the impression it wanted everyone to take from the casing. (It is possible that the device detonated was not the same as the miniaturized peanut; some early thermonuclear devices were quite large, but it is likely safe to assume that North Korea is close to a thermonuclear warhead that can fit on missiles, if not actually there yet). A magnitude 6.3 earthquake, at precisely noon local time beneath a mountain in North Hamgyong, indicated that the peanut is the most powerful nuclear device ever detonated by North Korea.

How powerful exactly? It’s hard to say: while seismographs are the first method for outside observers to pick up on a test, the readings have to be interpreted after the fact. Following [North Korea’s nuclear test in 2013, researchers published varying estimates of yield, based on the seismic readings and estimates about the depth of the test and the geology of surrounding the blast. With refinement, the ranges of the estimates narrowed, but still left a possible range of explosive yield. As seismologists set to work Sunday night, they knew simply that it was big. In the days since, we’ve seen a wide range of estimates on the yield. U.S. intelligence places the yield at 140 kilotons, with other estimates ranging as low as 50 kilotons and as high as 500 kilotons.

This isn’t the first time North Korea’s claimed it detonated a thermonuclear device, but this is the first time evidence backs it up. In early 2016, North Korea tested a device, but the yield was small, just 3.35 kilotons, making it only modestly bigger than the first test in 2006, which barely registered a kiloton. Expert consensus now is that that was, if anything remarkable, a boosted fission reaction, where where a small amount of fusion prolongs the fission reaction of the bomb, making it more efficient than a normal fission bomb (like those dropped on Japan in 1945), but not as powerful as a thermonuclear fusion weapon (the standard bomb in nuclear inventories the world over today). The New York Times has a great and clear diagram of the difference between an atomic bomb, a boosted fission bomb, a layered atomic bomb, and a thermonuclear weapon.

Nice & accessible NYT primer on the kinds of nuclear bombs, from vanilla fission to the Teller-Ulam banana split. https://t.co/c5L0hGnyxI/ pic.twitter.com/d5UaztDSg6

It took the United States seven years to go from an atomic bomb to an H-bomb; and the Soviet Union four years. Twenty years passed between India and Pakistan developing fission bombs and testing fusion bombs, so the process can take some time. But China went from first bomb to thermonuclear bomb in just three years and six tests. On the off chance that the weapon itself was not thermonuclear but still had a yield over 100 kilotons, it’s likely the same impact as if it had been.

“Did North Korea actually succeed in testing a true staged thermonuclear device on September 3? Experts will pore over seismic data, radionuclide signatures from possible atmospheric venting, and study the images released by North Korea carefully to determine the veracity of its technical claims and whether the test suggests a true staged thermonuclear device or a boosted fission device,” write journalist Ankit Panda and MIT political science professor Vipin Narang say, “But, for strategic deterrence purposes, it does not matter. All that matters is that the explosive yield is large enough to flatten cities and the device is ready for use in ballistic missiles. And given the magnitude of the seismic data, it seems clear North Korea unquestionably demonstrated that ability.”

North Korea’s latest test follows a year of tests, including most notably two ballistic missiles and an intermediate range missile that overflew Japan. For an unpopular regime in a hostile neighborhood dead-set on survival, the mad logic of nuclear deterrence means the ninth and newest member of the nuclear club likely has the weapons to match its claims. The costs of regime change, for anyone worried about the Kim dynasty and its hold on power, is now in the millions of lives, and with missiles that can reach the continental United States, they are not exclusively Korean lives. Indeed, the missile’s range and the warheads power extends concern outwards in all directions, factoring into the security concerns for not just neighboring South Korea and nearby Japan but even India

And it’s likely that this need for deterrence, for credible deterrence, is why North Korea released pictures of the device, then the test, and then a technical document about the weapon.

“North Korea has backed up its claim—sort of—by releasing photographs showing a peanut-shaped weapon that could fit into a missile nose cone,” writes Alex Wellerstein, a nuclear historian at Stevens Institute of Technology. “While an external weapon casing cannot tell one much about what actually is inside the weapon (it might be filled with jelly beans for all we know), it’s the clearest signal yet that the North Koreans desperately want the world to consider them a thermonuclear power.”

As Americans woke up on labor day, they awoke in a world with hostile foreign powers capable of launching thermonuclear warheads at cities within the continental United States. The test and revelations of September 3rd may mean that North Korea is part of this number, a handful of new weapons in a world already rich with likely 15,000 active warheads. But Americans woke to that reality on September 3rd, and the day before, and in fact every day since February 9, 1959, when the Soviet Union deployed its first nuclear-armed ICBM.