This is a threat Russian ICBMs still pose today, as they have for decades. 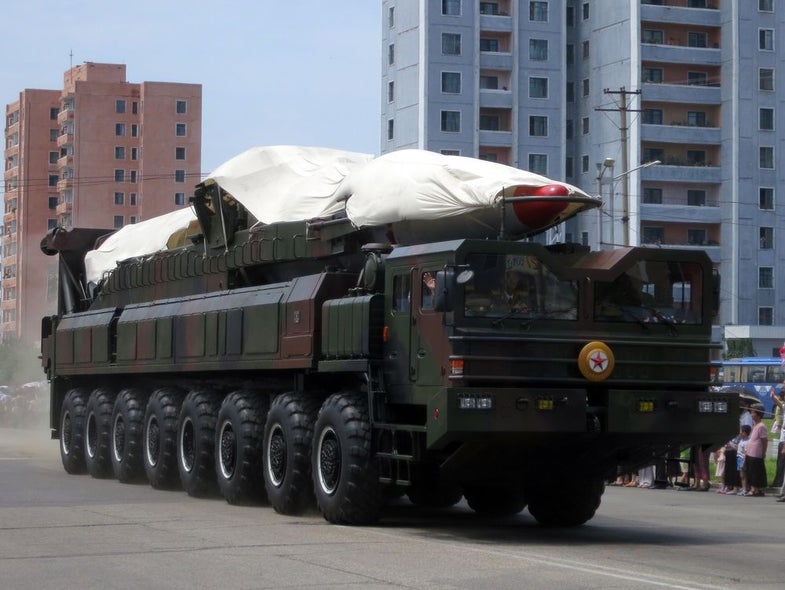 On Friday, July 28, the Democratic People’s Republic Of Korea successfully tested an Intercontinental Ballistic Missile for the second time. The design of the Hwasong-14 was the same as the missile tested on July 4, and in its second flight, it confirmed what several analysts already surmised. Despite years of development to this end, this week the United States is faced with a shocking reality: there is a new country that can hit New York City or Washington, DC, with a nuclear weapon.

This test is the result of years of progress in a nuclear program. In 2006, North Korea became the first nation to test a nuclear weapon in the 21st century. Despite 11 years and one dynastic succession since then, the country appears as committed as ever to developing and fielding a viable nuclear weapon, testing submarine launched missiles, intermediate-range ballistic missiles, and culminating last week with the second test of an Intercontinental Ballistic Missile (ICBM). While analysts viewed an ICBM test in 2017 as something of an inevitability, the success of that test and the range of the missile caught many off-guard.

Specifically, there is the matter of range. Since the Korean War froze into a durable armistice in 1953, the United States has kept soldiers and other service members deployed in South Korea, a diplomatic and strategic bet guaranteeing American involvement should the long-dormant war turn hot again. That means for decades those troops lived and trained within range of North Korean artillery. (Civilians in South Korea, especially the nearly 10 million living in Seoul, would be the most directly threatened by a renewed Korean War). With short-range and intermediate-range missiles, North Korea extends its reach to threaten civilians and American forces in Guam and Japan, but it’s the ICBM that places American civilians at home within the danger. It is not, in this case, a unique danger, but it’s worth taking a moment to see why, exactly, ICBMs loom so large in the nightmares of military planners.

The Long Road To ICBMs

Towards the end of World War II, V-2 rockets launched from Germany at the United Kingdom proved the ability of one country to hit another without ever leaving its borders or even sending planes, but it wasn’t until the Cold War that missiles moved from a novelty to a defining feature of war. Nuclear weapons increased the destructive force per cubic inch of a bomb, making it so a single warhead wouldn’t just destroy a building, but could destroy a city. And while the V-2 only had a range of 200 miles, Intercontinental Ballistic Missiles, or ICBMs, increased the range to 3,400 miles and beyond. Put together, that meant countries across the globe could—provided they had both a working warhead and a working missile—threaten each other with weapons capable of killing millions within an hour of launch.

When the Soviet Union put Sputnik into orbit in 1957, it won the first real victory in its space race against the United States. It also revealed that the country had the technical and engineering ability to make the deadly weapons. The United States deployed its first ICBM in 1959, using an Atlas missile. Just two years later, the USSR deployed the R-7A, its first ICBM. Since 1960, there hasn’t been a year without active ICBMs in some form or another pointed at the United States.

Besides the Soviet Union and the United States, China built an arsenal of ICBMs during the Cold War. China’s ICBM portfolio is small but growing, with a report from the Bulletin of Atomic Scientists estimating a total inventory of 100 ICBMs by 2026, and likely no more than 30 missiles (some with multiple warheads) deployed at present. Despite not officially acknowledging a nuclear program, Israel is widely believed to have nuclear weapons and has a missile with a range estimated to be within the lower bounds for an ICBM. In 2012, India tested its first ICBM, and then tested the missile again in 2013, 2015, and 2016, with more tests expected before deployment. This all makes North Korea the sixth nation to potentially deploy nuclear weapons that way. (Other nuclear weapon delivery methods include submarine-launched missiles, bombs carried by planes, and shorter-range missiles, some of which are used by all the countries above, as well as the remaining nuclear powers of France, the United Kingdom, and Pakistan.)

Apart from China, the major threat from ICBMs rests with the United States and Russia. The United States deploys 440 ICBMs, and Russia claims to field as many as 400. These are each fractions of the total nuclear inventory of both countries, with over 1,500 nuclear warheads deployed by each nation and inventories around 7,000 warheads apiece. (It is also a step down from the peak of the Cold War, when warheads totaled over 70,000.) All of which is to bring context to the latest North Korean test: a new weapon for a newly nuclear country, but not itself an unfamiliar kind of threat for anyone who survived the Cold War.

Doom on the Range

The potential size of North Korea’s nuclear inventory is constrained by several factors. Some are hard to know, like the amount of plutonium on hand and the efficiency of manufacture, though even generous estimates put the number of warheads on hand by the end of 2017 at below 30.

“We don’t know very much about how many missiles they could have made,” says Melissa Hanham, a senior researcher at the James Martin Center for nonproliferation studies. “We do know a bit more about their launchers. They are somewhat constrained by how many trucks they have to drive the missiles around and erect them. There are six of these super heavy duty transporter-erectors that the procured from the Chinese, but that being said in the April parade they’re also using the same truck that the Musudan can be carried on.”

The April parade is when North Korea shows off its military, and the footage is carefully analyzed by researchers looking for a glimpse into the country’s developments. The upper estimate on how many Transporter-Erector-Launchers North Korea has is about 200. And being road mobile means a lot for both the weapon’s survivability and its range. Consensus of the reach of the weapon is now around 10,000 km, or 6,200 miles.

“That 10,000 km is sort of our minimum guess and yes definitely they can reach most of the midwest and all of the west coast and nearly all of Canada,” says Hanham. “It’s worth noting that these missiles are road-mobile, so if they went up to the city of Rason they would get a further reach, and if the range estimate goes up to 11,000km, it’s every state but Florida.”

North Korea likely still has a lot of testing ahead of its nuclear program; ICBMs didn’t really take off in the Cold War until after the development of the hydrogen bomb, which uses nuclear fusion to create a blast orders of magnitude more powerful than the fission-powered atom bombs. Packing that much power into a warhead is a difficult task for any nation, especially one as isolated as North Korea, but as the recent development of an ICBM shows, it would be folly to consider it impossible.

“I do think that there’s a tendency to underestimate North Korea, or to assume they are not technologically advanced enough to be a threat to the U.S.,” says Hanham, “and I think that that is a mistake.”

This ticking clock is one the United States has weathered before. Faced with the danger and strength of a nuclear-armed Soviet Union, the United States opted not on direct military intervention, but instead a decades long program of deterrence and containment. As former Secretary of Defense William Perry notes, the window for negotiating an end to a North Korean nuclear program was likely lost in 2001, but that doesn’t mean there aren’t still gains to be made from engaging with North Korea now, which could still curtail and limit the extent of the program. And it’s also a reminder that the easiest time to stop a nuclear program is before a country has a nuclear weapon.

“The longer we wait the better their technology is going to get, regardless of whether you choose military intervention, which I think is a terrible idea, or diplomatic intervention, which I think is a less-bad idea,” says Hanham. “The longer you wait the worse the outcome will be for you. I would encourage policymakers to act carefully now in order to engage North Korea.”