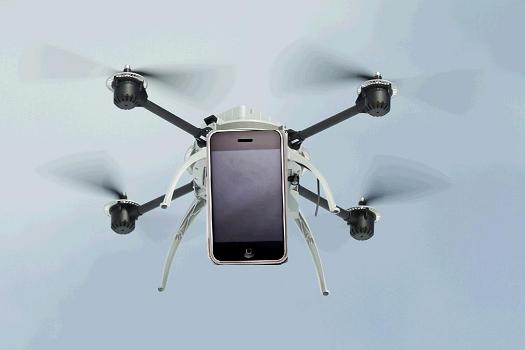 Right now drones aren’t a part of everyday life for most Americans, but that’s changing with 81 organizations–including government agencies, police departments, and universities– cleared to fly robots in the U.S. and more expected down the line. In 2015, the Federal Aviation Authority plans to allow the first commercial use of drones in the United States. That might sound scary to people worried about a drone flying overhead and—legally—snapping pictures of them in their backyard sunning in their birthday suit. Thing is, that future has already arrived.

I’d hate to see [technology] like that in the hands of an adolescent boy.–Al FrankenUniversity of Washington School of Law Professor Ryan Calo, a witness at the hearing, put it this way: drones are “basically flying smartphones.” What he means is that drones build on what our smartphones already do: they take pictures, they track locations, they spy. The biggest difference is that they do these things in the sky. So when we talk about drones, what we’re really talking about is privacy—privacy that we’ve already sacrificed.

That’s not to suggest that the proliferation of drones doesn’t introduce significant challenges. Senator Al Franken (D-Minnesota) speculated about a mosquito-sized drone with a battery life of days. He assumed it was some kind of distant-future prospect. Amie Stepanovich, director of the Domestic Surveillance Project Electronic Privacy Information Center, corrected him: such a drone already exists. “I’d hate to see something like that in the hands of an adolescent boy,” Franken replied with an impish grin. Then he paused just long enough to make sure everyone got the joke before catching himself: “I don’t know what I mean by that.”

Stepanovich imagined a different kind of threat: facial recognition software working in tandem with drones, creating a world where true privacy is impossible. The separate technologies behind drones and facial recognition software have both experienced tremendous growth and improvement over the past decade. Combine the two, and you’ve got a robot that can pick people out of a crowd.

Again, though, smartphones already have similar capabilities. Facebook automatically recognizes faces, and probably has the world’s largest facial recognition database. Robots that automatically tag faces sound new and scary, but if you replace “robots” with “that one drunk guy at a party who keeps taking pictures,” we’re already living that dystopia. And don’t get me started about the horrifying things teenage boys have already done with technology.

Safety was another big issue raised at the hearing. Senator Dianne Feinstein (D-California) asked about hobbyists modifying drones to carry and use a weapon. How people use new technology for harm is a pretty standard fear—and not an unfounded one. To continue the “cellphone with wings” parallel: cell phone bomb detonators already exist. While it’s worth acknowledging the possibility of a weaponized commercial drone in the United States, the country already has at least 310 million already-weaponized weapons.

We’re already living that dystopia.So how do we regulate drones to ensure safety and privacy? Technology always moves way, way faster than the law. Michael Toscano, president and CEO of the Association for Unmanned Vehicle Systems International, likened today’s drone laws today to where we were with the internet 50 years ago. (And internet law still has a ways to go.) The trick, Stepanovich says, is to make drone laws as technology-agnostic as possible. Just as internet law doesn’t particularly care about the browser people use to access the internet, drone law shouldn’t be overly focused on how the machines get in the air but what they do while they’re there. Stepanovich also floated the idea of putting checks on cops (who already use drones and will probably use them even more in the future). Drone-equipped law enforcement agencies should be required to get a warrant to search private property, she suggested–just as they would if they walked through someone’s front door.

Beyond that, there were few concrete solutions proposed at the hearing. But at least the right questions are being asked.