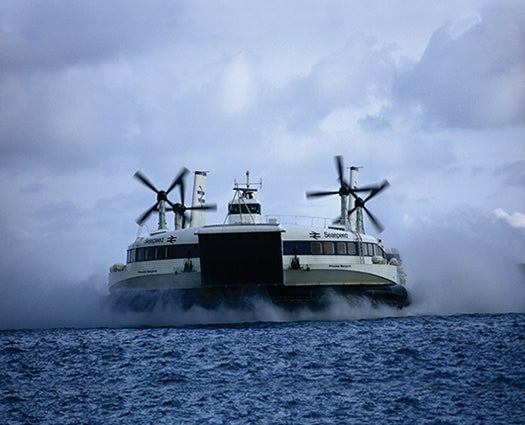 The inventor of the modern hovercraft, Christopher Cockerell, once imagined that his vehicle would cross the Atlantic at 100 miles per hour, an ocean liner coasting on air. While small hovercraft still serve a role in recreation and military landings, Cockerell’s dream of hover liners is now defunct. The last significant commercial hovercraft service—which traversed the English Channel and carried 1.25 million passengers annually at its peak—was discontinued in 2000.

What sank it? First, the fuel costs were prohibitive. The vehicle’s four Rolls-Royce engines consumed 1,200 gallons of fuel per hour. That was fine during the 1950s and 1960s, when fuel was very cheap, but the costs became more burdensome. The Neoprene skirt that encircled the craft created another problem. Engineers designed the skirt to bend and flex over choppy water while maintaining a bubble of air beneath the skirt. But at 75 mph, the rubber took a beating on most trips. According to Roger Syms and Robin Paine, two former hovercraft pilots who wrote a history of the vehicle, On a Cushion of Air, portions of the skirt needed daily repair or replacement. “When you have a car, you don’t expect that you’ll have to change the tires every night,” Syms says. To make a large-scale hovercraft commercially viable today, Paine says, “There would have to be a huge advance in skirt technology.”

Have a burning science question? Email it to fyi@popsci.com or tweet @popsci hashtag #PopSciFYI.

Ask Us Anything
Aviation