The Impossible Dream Of The Hindenburg: How Airships Were Going To Change The World

76 years ago today, the Hindenburg crashed over New Jersey, killing 35 people and ending the era of the airship. From the Popular Science archive, what it would have been like to travel the world in a Zeppelin. 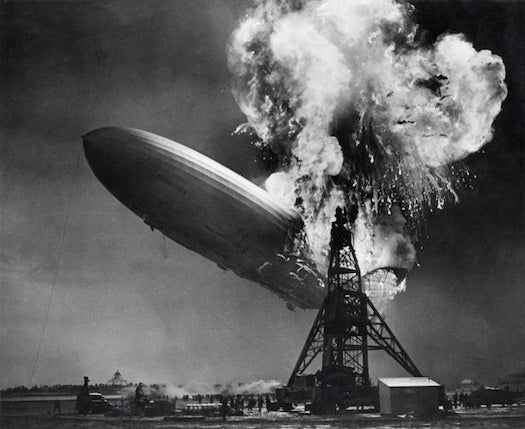 “Now You Can Fly Around The World,” by John E. Lodge and excerpted below, originally appeared in the June 1936 issue of Popular Science_ magazine. The Hindenburg airship crashed May 6, 1937._

Out of the sky over Lakehurst, N. J., a few days hence, the enormous silver Von Hindenburg, biggest Zeppelin ever built, is scheduled to nose down for a landing at the end of its maiden voyage to America. Not many weeks later, the four-engined, twenty-five-ton China Clipper will head out past the promontories of the Golden Gate on its first passenger flight to the Orient.

Those two events will forge the final links in a vast chain of airways to encircle the globe. Before the end of this summer, you will be able to buy tickets for an aerial circuit of the earth as easily as you now purchase them for a round-the-world cruise by steamer. Years of preparation, the flights of daring pioneers, and the latest advances in engineering and radio have given a solid foundation to what, but a few short decades ago, was a seemingly impossible dream.

You will be able to buy tickets for an aerial circuit of the earth as easily as you now purchase them for a round-the-world cruise by steamer.

It is only sixty-four years since Jules Verne’s classic “Around the World in Eighty Days” appeared in American bookshops. That imaginary circuit of the globe initiated a long series of real-life dashes by train, automobile, boat, and aircraft. Beginning with Nellie Ely’s seventy-two day journey, in 1889, and ending with Wiley Post’s eight-day flight, in 1933, these races against the clock have dramatized the advancing speed of transportation.

Such stunts, however, were pioneering trips far beyond the reach of the ordinary person. Now, on regular air lines, it will be possible to fly around the world in comfort, following the trail of Jules Verne’s hero Phileas Fogg by air. In twenty flying days, and for the price of a high-class automobile, you can make the journey.

The Lakehurst field is the scene of the start. Under the glare of searchlights, the giant Von Hindenburg towers higher than a ten-story building and stretches across the field for a distance greater than three and a half city blocks. With nearly fifty other passengers, as well as a crew of forty, you climb aboard the transatlantic Zeppelin. In your stateroom, you find a comfortable bed, electric lights, hot and cold running water. Overhead, the great gas cells hold 7,000,000 cubic feet of helium, enough to lift a weight equal to half a mile of automobiles lashed bumper to bumper!

There is a final inspection, then, at midnight, the command: “Up Ship!”

There is a final inspection, then, at midnight, the command: “Up Ship!” The mooring cables drop away, and majestically the immense, silver cigar rises into the air. Almost noiselessly, its four 1,300-horse-power Diesel engines begin spinning their huge propellers. The ship gathers speed. The lights of Lakehurst drop to the rear. At eighty miles an hour, you are heading for the coast. Half an hour later, the vast cluster of pin-point lights marking New York City has slipped beneath you and faded away behind.

The sky liner is taking the great-circle route to Europe, following the trail of Lindbergh. In stormy weather, it would head across for the Azores along a “bad-weather route,” 600 miles longer but out of the path of the northern gales. Sunrise finds you well up the coast, and mid-afternoon reveals the rocks of Newfoundland below. By evening, you are out over the Atlantic
making the “down-hill run” to Europe. With prevailing winds at her tail, the big ship rushes on, hour after hour. An occasional steamer, the gleaming peak of an iceberg, alone break the monotony of tossing water. You have time to examine the great aerial hotel on which you are riding, to see the smoking rooms, the shower baths, the electric ranges, and even the full-size grand piano it carries.

By evening of the second day, you are gliding across Belgium, up the Rhine to the new airship shed at Frankfort on the Main. Forty-seven hours after leaving Lakehurst, you step down at the European airport. The fare for this 3,900-mile, transatlantic trip via the airways is $400.

Read the rest of the story in the June 1936 issue of Popular Science_. Then, read about a daring new plan for the future of airships._