A month ago this was Iron Man 3 level science fiction. Now? Reality. 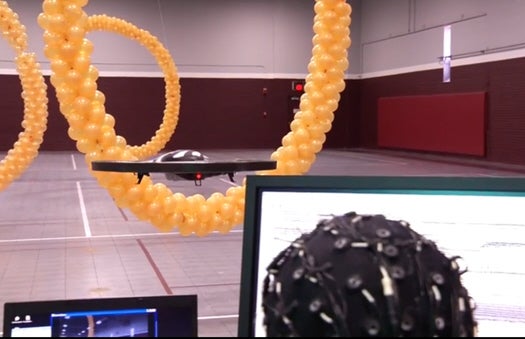 Researchers at the University of Minnesota today revealed a drone that can be controlled merely by thought, and that’s not even the coolest thing about it. Published in the Journal of Neuro Engineering, the project has implications in everything from unmanned vehicles to paraplegic mobility.

The setup here is pretty basic, futuristic though it seems. The drone is a commercially available four-blade helicopter–the Parrot AR quadrotor–which is basically a drone hobbyist’s Model T. To control it, the “pilot” wears a funny hat, the sensing end of an electroencephalogram (EEG). EEGs place an array of electrodes over a person’s head, in a totally non-invasive way, then pick up on electrical activity in the brain. Clusters of activity, like thinking about making a fist with a right hand, generates a spark in a specific area of the brain. That spark gets translated through a computer into a quadrotor command (“turn right”). The command is then beamed to the quadrotor via WiFi.

Previously, researchers showed that subjects could control a virtual helicopter with their thoughts. The latest demo–using a real, live helicopter–is just another step toward more practical applications, with the ultimate goal being to help people with disabilities and neurdegenerative dieseases regain mobility, says researcher Bin He, a professor of biomedicial engineering at the University of Michigan.

Why demonstrate the system with a drone? “It’s more manageable to test in protocol than it is to do on a patient with a prosthetic arm,” he says. In the published paper, the pilot is illustrated as someone in a wheelchair, sitting in front of a laptop that’s streaming back everything the drone sees. A thought-controlled wheelchair would probably help that person out more, but ground-bounded wheelchairs rarely encounter something both drones and arms deal with every day: precisely navigating three dimensional space. Flying a drone through a hoop turns out to be good practice for maneuvering a hand to a mouth, say, or putting an arm through a sleeve.

The system is relatively easy to use. A series of exercises trained the five students who piloted the drone. The first is a game that looks like pong, where the subject used the EEG controls just to move a dot on a screen right or left. The second controlled up/down motions, a third combined them all in a similar, pong-like interface, and the fourth exercise before actually piloting the drone involved a flight simulation of the drone through hoops above an imaginary town.

There’s a funny story about the sixth test pilot. The researchers were asked to put together a video of how the drone worked, and on short notice they couldn’t find one of the original test pilots. Instead, graduate student Brad Edelman had passed the first couple of tests, and he happened to be in the lab at the time, so they sat him down to try out the full thing. As you can see below, he flew it perfectly, suggesting that the technology is intuitive enough for some people to just pick up and use it.