Why Is Boeing’s 787 Dreamliner Such A Piece Of Crap?

Amazing new plane keeps catching on fire. Here are the questions you've been asking and the answers you need. 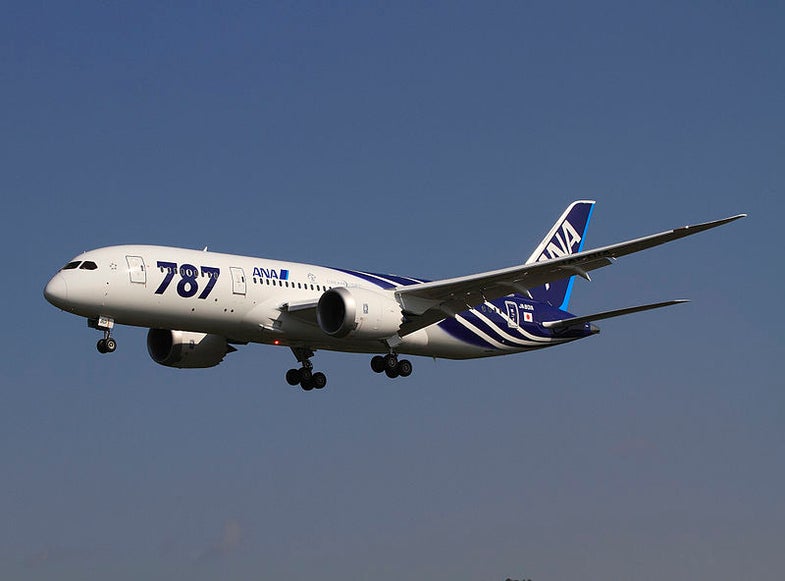 This article was originally published on January 17, 2013.—Eds.

Q: What is the 787 Dreamliner and why do we care?
A: The Dreamliner is a massive jet from Boeing, the company’s most fuel-efficient airliner and the first major airplane to be made with composite materials–specifically, carbon fiber reinforced plastic. It’s made of 80% composite by volume, which makes it much lighter than typical planes without sacrificing strength, and has a lot of nice consumer-facing features–bigger windows, new noise reduction techniques, modular bathrooms, and more space for passengers. It’ll hold up to 296 passengers, too–this is a big boy. It’s not a revolutionary plane, but we all care about it because it’s the next evolution of the planes we’ll all take. You probably won’t fly on an all-electric plane any time soon, but you probably will fly on a Dreamliner.

Q: Cool! So how come I can’t catch one flying out of my local airport tomorrow?
A: Well, here’s the thing about the Dreamliner: it’s been plagued with more serious problems than any other major new jet line in recent memory. Its batteries have a tendency to catch on fire. Earlier this week, both Japan Airlines and the FAA grounded all Dreamliners under their control until we can get a handle on why these things keep breaking.

Q: What’s wrong with them?
The Dreamliner relies on electrical power much more than its predecessor, the 777. Earlier planes used bleed air, which is super-hot, super-pressurized air taken from within the engine, and used it for all kinds of functions, from de-icing to pressurizing the cabin itself. But in order to cut down on energy use, the 787 relies instead on electrical power for that, from some very powerful lithium ion batteries. Those batteries have of late taken up a new hobby: catching on fire and freaking the hell out of all of us.

Q: Wait a second, lithium ion batteries? Like in hybrid/electric cars? And phones and laptops and a million other things?
A: Well, kinda. There are different kinds of lithium ion batteries, using different chemicals and different reactions, and they behave pretty differently. This is a great explanation of what’s going on in those batteries, but in short, the Dreamliner uses cobalt oxide batteries, the same kind as what’s used in smartphones, laptops, and tablets. It’s chosen for all of those purposes because it’s got a crazy-high energy content for its size and weight–like, twice that of the batteries used in electric cars–but it also has one very big problem. That would be heat.

Gadget makers have worked for years on cooling methods so their batteries don’t catch on fire, and sometimes they do anyway, but these batteries are pretty small and not all that hazardous. The batteries in a Dreamliner, on the other hand, are huge. And on fire.

Q: But planes always have problems at first, right? Aren’t these just growing pains?
A: Yeah, that’s a common thought, helped along by just about every Boeing exec and anyone else who has a financial stake in the Dreamliner not catching on fire repeating it. And it’s not false, exactly. But the problems the Dreamliner is having aren’t exactly the same kinds of problems as, say, the Boeing 777. The 777 has had eight so-called “aviation occurrences,” which is airplane code for “accidents.” But those problems were mostly easy to solve–there were a few issues with the de-icing system, which was subsequently redesigned, and all the other issues were one-offs, like a 2011 cockpit fire that was probably due to “a possible electrical fault with a supply hose in the cockpit crew oxygen system.”

The Dreamliner has had many more problems. Cockpit windows have cracked several times. At least three of the 50 active Dreamliners have had overheating problems with the lithium ion batteries, leading to smoke and/or fire. Two planes have had fuel leak problems. These are much more difficult to manage than a de-icing flaw; you can’t just swap out the batteries, since there are no other batteries with the same size and energy storage, and as the batteries are a much more integral part of the plane’s entire operation, this isn’t a small issue. The fact that the Dreamliners have had similar problems is a cause for concern.

Q: How long was this thing in development? How did this slip by?
A: Ah, good question. The Dreamliner has had a very long and tumultuous birthing process, with several redesigns over the years. The Dreamliner is actually several years behind schedule on many of its deliveries; you’d think in that time someone would make sure the thing didn’t catch on fire. But nobody really knows how this kind of thing got by; best guess is that with such a new kind of electrical power system, nobody really knew how the Dreamliner would respond with repeated use. On the other hand, Qatar Airlines CEO Akbar Al Baker, among other “airline insiders,” has said he’s not surprised by the groundings.

Q: What happens now?
A: The FAA and the equivalents in other countries will conduct full-scale investigations into the problems with the Dreamliners. We won’t know what the solutions are until we see those findings. So the answer to the sub-question here, “can the battery situation be fixed and how,” is “it can probably be fixed, but until we know precisely what the problem is we won’t know how.” In the meantime, some of the airlines are demanding payment, considering they just spent millions of dollars on a plane they can’t fly, and it’s possible that others will decide not to continue with their purchases. Boeing has about 800 Dreamliners set to be built; if people start pulling out, the company is going to be in serious trouble.