The Future Of Flight: A Congestion-Killing Aircraft 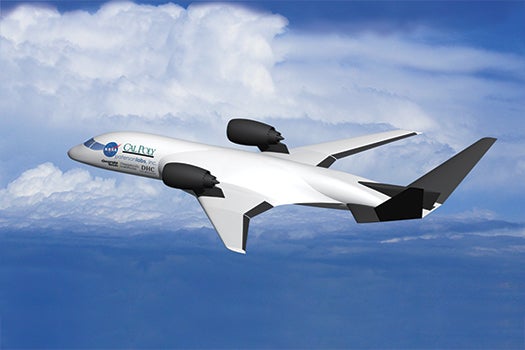 Aircraft design is often overlooked in discussions of the FAA’s multibillion-dollar NextGen initiative, the elaborate mélange of satellite-based guidance, arrival, and departure technologies intended to modernize the outdated and much-criticized national airspace system by 2025. Yet a team led by researchers at California Polytechnic State University found that one of the easiest ways to improve system efficiency may be to reengineer the plane itself.

As part of a five-year NASA research project, the team designed a 100-passenger Cruise Efficient, Short Take-Off and Landing (Cestol) airliner that could arrive and depart at steep angles to and from 3,000-foot-long runways. “This plane was designed with a circulation-control wing, which generates higher lift at lower speeds,” says David Marshall, an associate professor with Cal Poly’s aerospace-engineering department. “We can reduce the field length by 50 percent.”

For the past year, scientists have wind-tunnel-tested a 2,500-pound model with a 10-foot wingspan, nicknamed Amelia (for Advanced Model for Extreme Lift and Improved Aeroacoustics), at NASA’s Ames Research Center.

Other researchers studied how Cestol planes would integrate into existing infrastructure. Results show that in tandem with NextGen’s approach and departure routing, which could allow planes to fly outside traditional flight paths, Cestol aircraft could land at underused, shorter runways or at smaller regional airports. Spreading air traffic over more runways would relieve congestion and substantially reduce flight delays.

Because aircraft-design cycles can span decades, Cestol craft will probably not arrive on commercial runways for a dozen years or more. But when they do, Amelia will probably stand as an influence. “I don’t know that Boeing will make a plane that looks just like Amelia,” Marshall says, “But I do expect some of the technology to transition over.”

How It Works: The Cestol Airliner

Circulation Control
Conventional wings often have multiple flap elements, which rotate downward to increase the curve of the airfoil. The Cestol has a single flap, augmented by a narrow slot that runs the length of the wing. When the flap rotates downward, the slot channels high-pressure air over the top of the wing and directs the wind stream downward, increasing lift.

Deflecting Jet Exhaust
To combine the effects of engine exhaust and circulation control, the team moved the turbofans to the front of the wings. When the flaps rotate down, the exhaust is pulled into a low pressure region, which increases lift and allows for even slower and steeper ascents. “With this design, we can generate lifts five to 10 times higher than a conventional wing,” Marshall says.