Another Big Milestone For The X-47B: Its First Touch And Go Landing 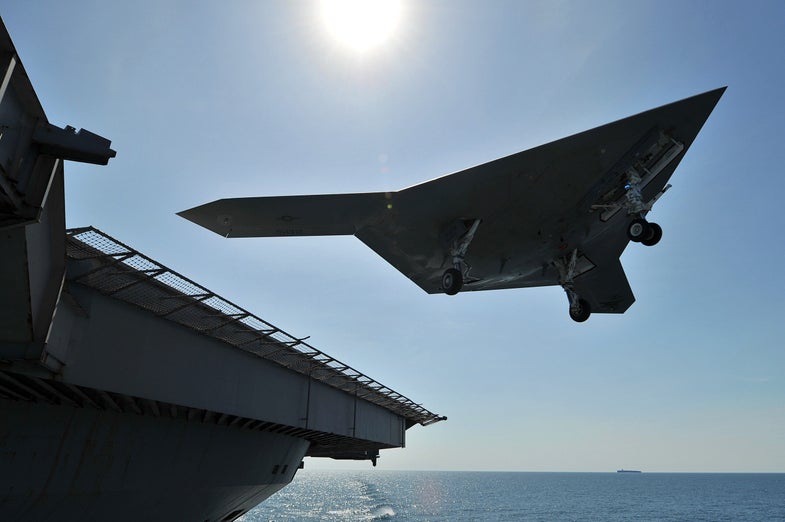 The Navy’s unmanned and autonomous X-47B continues to hit new milestones. Less than a week after completing its first catapult launch from a carrier deck last Tuesday the Unmanned Combat Aerials System (UCAS) executed its first touch and go landings–that’s when an aircraft touches down like it’s landing but then accelerates and takes off again–aboard the USS George H.W. Bush on Friday, bringing this technology demonstrator ever closer to being fully carrier-capable.

The X-47B is the Navy’s first modern unmanned fixed-wing aircraft to operate from a carrier deck and is currently proving out a suite of technologies that will enable a future program (known as Unmanned Carrier Launched Airborne Surveillance and Strike system, or UCLASS) to produce an actual unmanned, autonomous combat jet for Navy service. Critical to UCLASS are the precision GPS and relative navigation technologies aboard both aircraft and carrier that link the two together into a seamless system, and that’s what we’re seeing at work in the video below.

In the video, the X-47B makes two passes over the carrier deck before executing a couple of touch and go maneuvers, which are essentially aborted landings wherein an aircraft touches down on the carrier deck and takes off again. They are a typical training maneuver, used when a pilot is practicing landing approaches. In carrier ops touch and go maneuvers are quite a bit more significant, as pilots must quickly take off again if they miss the arresting cable on the carrier deck when landing (although technically this is called a “bolter” rather than a “touch and go).

The two initial flyovers aren’t just for show, however, and that’s perhaps the most interesting part of the this video. During the two approaches wherein the X-47B doesn’t touch down it is basically practicing its landing approach plus a “wave off” in which either the Landing Signal Officer on the flight deck or the aircraft itself decides the landing is unsafe. This could be because something on the flight deck becomes unsafe (a person or vehicle wanders into the landing area, for instance) or because the X-47B’s flight computers detect something amiss with the aircraft’s glide path or angle of approach.

In other words, those first two flyovers are testing the ability of the carrier and aircraft to talk to each other over the super-fast datalink that they share–which is really the linchpin of this system. And the touch and go moments show the system working spectacularly, putting the X-47B on the deck and then sending it skyward again off the other end. The Navy is still certifying the X-47Bs tail hook and landing capability on a terrestrial carrier simulator at nearby Naval Air Station Patuxent River on Maryland’s Chesapeake Bay (the USS George H.W. Bush is tooling around at some undisclosed set of coordinates off the Virginia/Maryland coast so the aircraft can fly between the two), but by the looks of things it shouldn’t have any problem completing carrier landings–and its mission–once it is cleared to do so.