The Environmental Benefits Of Eating Crickets Vs. Chicken: It’s Complicated

In recent years, foodies and earth-conscious eaters alike have grown increasingly interested in entomophagy (for the uninitiated, that’s the practice... 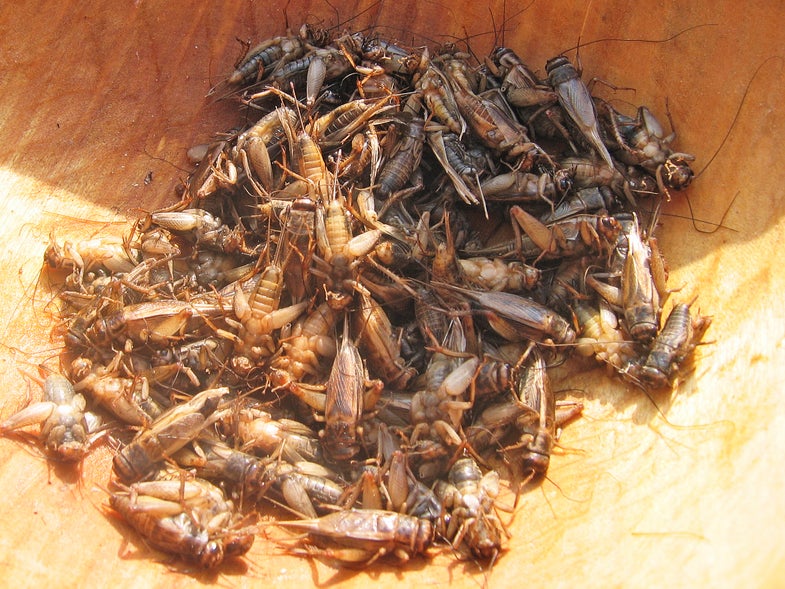 In recent years, foodies and earth-conscious eaters alike have grown increasingly interested in entomophagy (for the uninitiated, that’s the practice of eating insects). There are several reasons why, but a big one is that we’re facing a looming global food crisis. According to entomophagy proponents, insects could be one answer to this crisis because the critters require fewer resources—specifically, feed, land, and water—than other popular sources of protein such as poultry, pigs, and cattle. Part of the reasoning behind this hinges on the idea that insects are better at converting feed to protein compared to larger livestock.

I wrote a feature for the May issue of Popular Science about entomophagy exploring, specifically, the cricket farming and startup trend in North America (read here for more). Of course, as happens with many science stories, since science is a dynamic field, new research on how well crickets convert feed to protein published the very day that my story went live. I think it’s worth exploring that work here, as well as putting it in context.

The new study published at PLOS One by Mark Lundy, an agronomist from the University of California Division of Agriculture and Natural Resources, and Michael Parella, an entomologist from UC Davis. The team examined how well the house cricket, Acheta domesticus, converted five different feeds into edible protein: poultry feed and rice bran, processed waste from thrown-out grocery store food, minimally-processed post-consumer waste, a wheat and corn mix commonly fed to dairy cows, and a mixture of chicken manure, wheat, straw, and rice. They also raised the crickets in much higher numbers and densities than previous related studies—presumably more closely imitating how crickets would be massed-produced on farms.

“A primary motivation for doing the study was to quantify more thoroughly whether some of the efficiencies that had been previously reported would hold at an economically relevant production scale and on diets that weren’t already being integrated into the global protein supply chain,” Lundy says.

The researchers weighed the food, measured its nutritional value, subtracted the amount of feed that the crickets didn’t eat, and figured out the conversion factor from there. Crickets given the poultry feed mix and the processed food waste did fairly well, but more than 99 percent of the populations fed the remaining three diets died before they could be harvested.

Both the crickets raised on the poultry feed and the processed consumer waste converted protein roughly as well as chicken, and both groups were still considerably better compared to pigs and cows. And while the consumer waste group didn’t convert as well as the poultry feed group, the former has greater potential for sustainable farming since it comes from a waste stream, avoiding the extra greenhouse gases, water use, and other factors associated with raising grain for feed.

So does that mean crickets aren’t a “free lunch” after all? First of all, no lunch will ever be entirely free—any food we grow will require some sort of input. We aren’t Strega Nona. Second, while the study shows that the comparison between chickens and crickets might not be as rosy as once thought—at least under some conditions—it doesn’t show that for other livestock. The conversion also clearly greatly depends on what, exactly, the crickets are eating.

I asked a few of the cricket farmers and startups I interviewed for my PopSci feature what they thought of the new study. Keep in mind, of course, that insects are their business of choice, so they’re keen on spreading the cricket gospel. But they bring up good points.

Nathan Allen from Aspire, which is launching a cricket farm in Texas, points out that the study didn’t compare other major differences between cricket farming and chicken farming, including the use of antibiotics and hormones, humane “culling” (i.e. how the animals are slaughtered), green house gas and waste outputs from manure, the percentage of the animals that can ultimately made into food, and the overall nutritional comparison between the final products.

Kevin Bachhuber from Big Cricket Farms in Youngstown, Ohio, says the study also looked at food that isn’t actually fed to farmed crickets. “Crickets fed on unprocessed straw and chicken shit are going to die. That’s not what they eat. I’d die if that’s all you fed me, too.” As for the chicken feed diet used in the study, Bachhuber adds, farmed crickets usually eat a slightly different formulation because they require different ratios of Vitamin A, choline chloride, and other nutrients. The discrepancies in the feed used in the study could impact how well the crickets grew.

And according Pat Crowley, a hydrologist and the co-founder of Chapul, a cricket protein bar company: “I would say that the largest take home from this study is that there is indeed a dearth of data on the feed conversion ratios, with much of it coming from a few experiments out of Wageningen University in the Netherlands. The improvements Lundy intended to make were to mimic more of a farm-like environment to produce ratios from a population of crickets, instead of individual organisms.” Still, adds Crowley, there are key factors that contribute to growth that the study didn’t consider, including humidity, temperature, and other environmental conditions.

Lundy is working on a new study on black soldier fly larvae to explore regionally scalable waste streams, and he says “we are seeing some promising results.”

Whatever the take on this new conversion paper, it shows that a lot more work needs to be done to figure out the nuances of insect farming (which is pretty much the case for any study). And since experts still debate over the best way to farm cattle and other livestock—which have been around far longer in the U.S.—I’m sure the conversation about the benefits of cricket farming will continue for quite some time.

Lundy and Parrella, “Crickets Are Not a Free Lunch: Protein Capture from Scalable Organic Side-Streams via High-Density Populations of Acheta domesticus” PLOS One, April 15, 2015

“Crickets Are Not A Free Lunch, Protein Conversion Rates May Be Overestimated,” Entomology Today, April, 15, 2015