Earlier this week I visited disease ecologist and friend-of-the-blog Jenni Peterson, who will finish her PhD at Princeton University later... 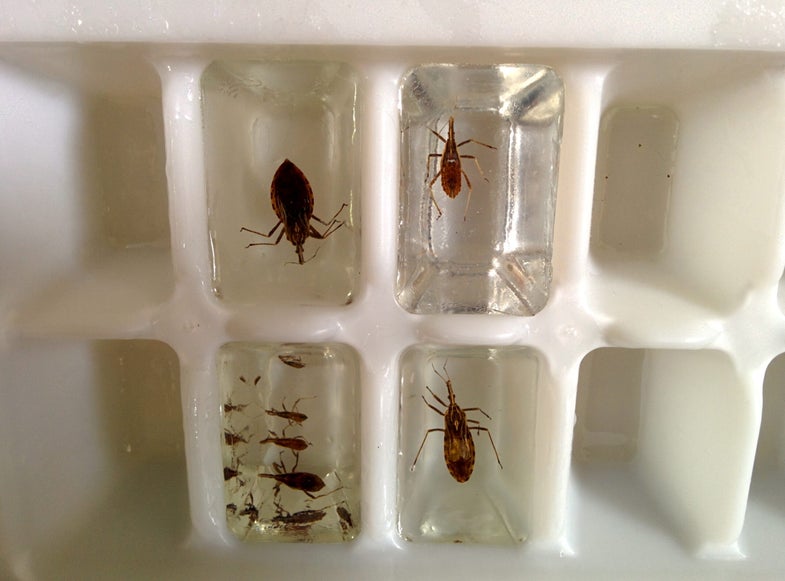 Wait for the resin to harden entirely before removing from the tray (and don't be mean and sneak any into your friends' drinks, okay?). Jenni Peterson
SHARE

Earlier this week I visited disease ecologist and friend-of-the-blog Jenni Peterson, who will finish her PhD at Princeton University later this year. Peterson studies the ecology of infectious disease with a specialty in Chagas disease, and this week she was making insect displays of one of the vectors of that illness: Rhodnius pallescens.

R. pallescens is one of around 140 species of triatomes or kissing bugs, which live primarily in Central and South America as well as in parts of the southern US and Mexico. All kissing bugs are capable of spreading the parasite Trypanosoma cruzi, the squiggly little protozoan that causes Chagas disease.

Peterson does the majority of her work on a different species,_ Rhodnius prolixus_, which she studies in the lab in Medellin, Colombia. But the bugs we were playing with earlier this week were from a field trip to Panama, where she helped collect R. pallescens from palm trees and run tests to see if the insects were carrying parasites.

T. cruzi survives in reservoirs of all kinds of mammals, from wood rats to possums. It spills over into human populations when a kissing bug bites an infected animal, pulls up the parasite, and then later both bites and poops on a human. That’s worth unpacking: unlike most insect vectors, kissing bugs don’t spread disease via bites. Instead, the parasites come out the other end when the bug defecates on you. The bite gets itchy, you scratch, and the parasites enter the body through the injured skin.

Only a handful of kissing bug species typically spread Chagas to humans, mainly because of their ecological niches. These insects tend to live in people’s homes, which means they have more of a chance of infecting a human than, say, a kissing bug that lives in a more remote area such as a forest or desert.

Chagas has two stages: acute and chronic. In the former, symptoms may include swollen and itchy bites as well as fatigue, headache, fever, and a signature swelling around the eyelid called Romaña’s sign, which happens if you have infected kissing bug feces on your hand and then rub your eye. Chronic Chagas shows up much later, possibly after 10 or 20 years, and affects around 20-30 percent of people who’ve had untreated infections. The symptoms vary, but usually involve tissues in the heart or digestive tract, along with a host of complications.

Chagas is treatable in the acute stage by the antiparasitic drugs nifurtimox and benznidazole, which are very effective if they’re taken soon after infection (neither is approved by the Food and Drug Administration in the US, although treatment can be available through the Centers for Disease Control and Prevention).

But the problem is that not everyone gets treated right away, partly because acute symptoms can be hard to trace back to a bug bite and partly because Chagas is a neglected tropical disease, meaning it most often occurs in impoverished regions with poor health care. According to the World Health Organization, an estimated 7-8 million people have Chagas worldwide.

I can relate. After spending roughly the same amount of time writing my bed bug book, I have my own collection of memorabilia, including a bed bug rubber stamp and a custom cross-stich that will soon hang in my office. Dedicating a lot of time to a species lends an affinity for it, even creepy crawly bloodsucking bugs.

Click through the above gallery for the step-by-step for Peterson’s insect display experiment, along with some bonus photos.

Disclosure: I know Jenni Peterson personally, and in fact we were on a winning trivia team together in 2008.

The Kiss of Death, by Joseph Bastien

Chagas disease, the Centers for Disease Control and Prevention 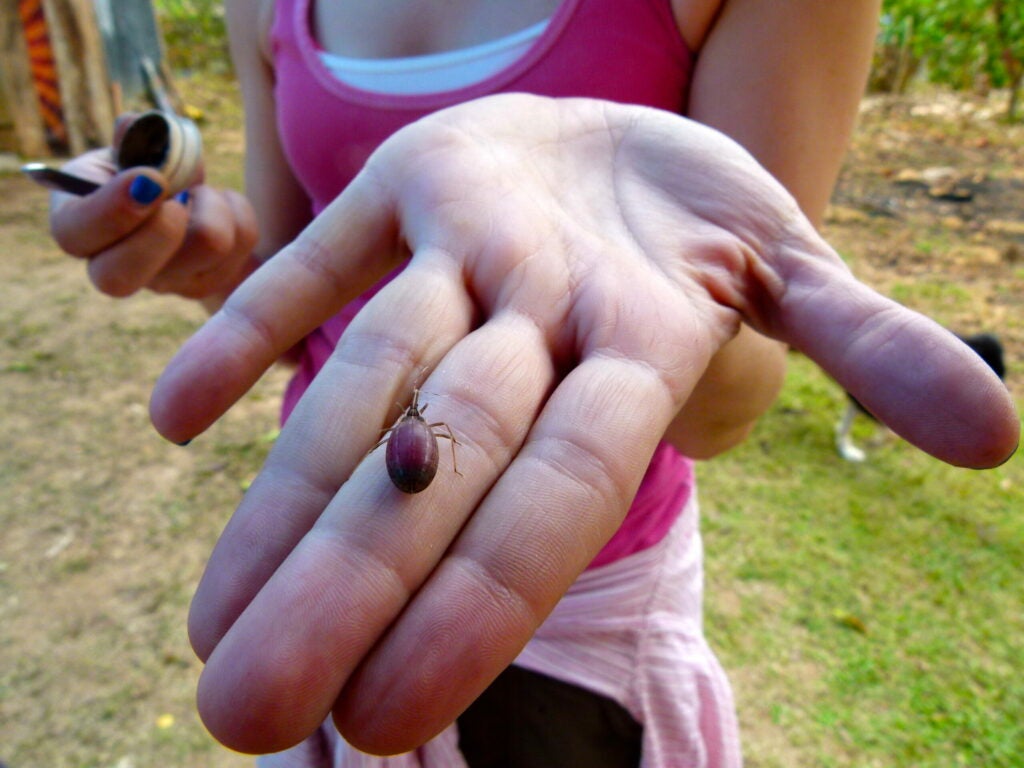 A Rhodnius pallescens from a laboratory-raised colony that just took a blood meal from a live wild animal (probably a possum or a spiny rat). Peterson says “I was not worried about it infecting me, becase even if it had just eaten T. cruzi parasites, they would not be in its poo for at least a few days.” 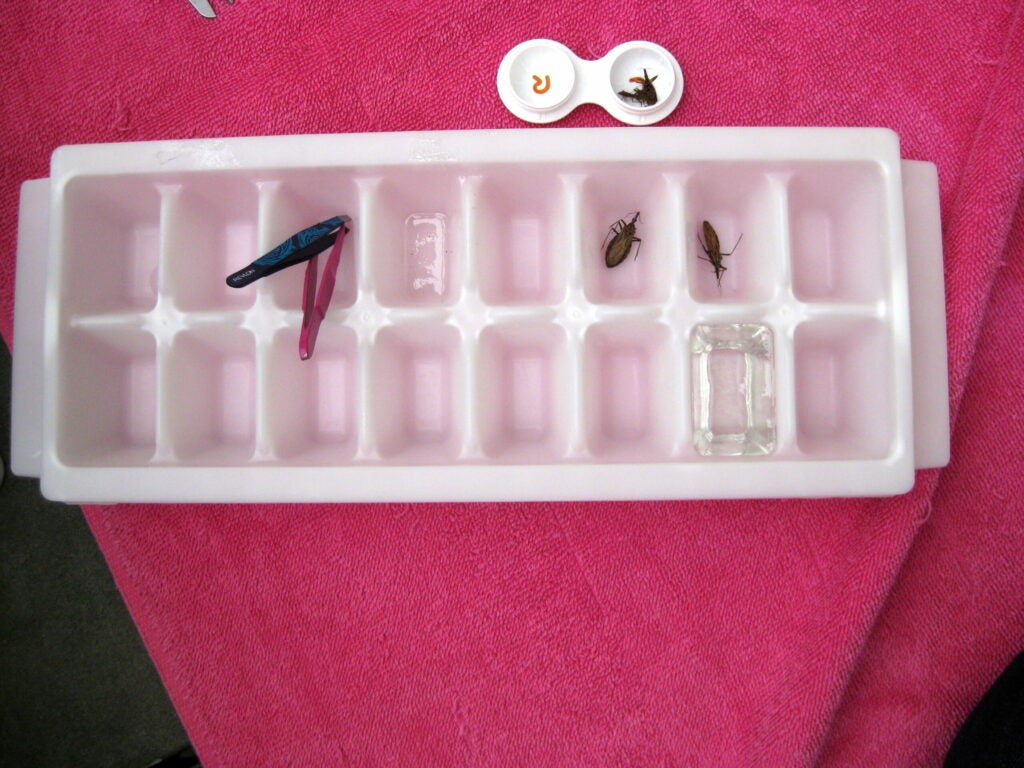 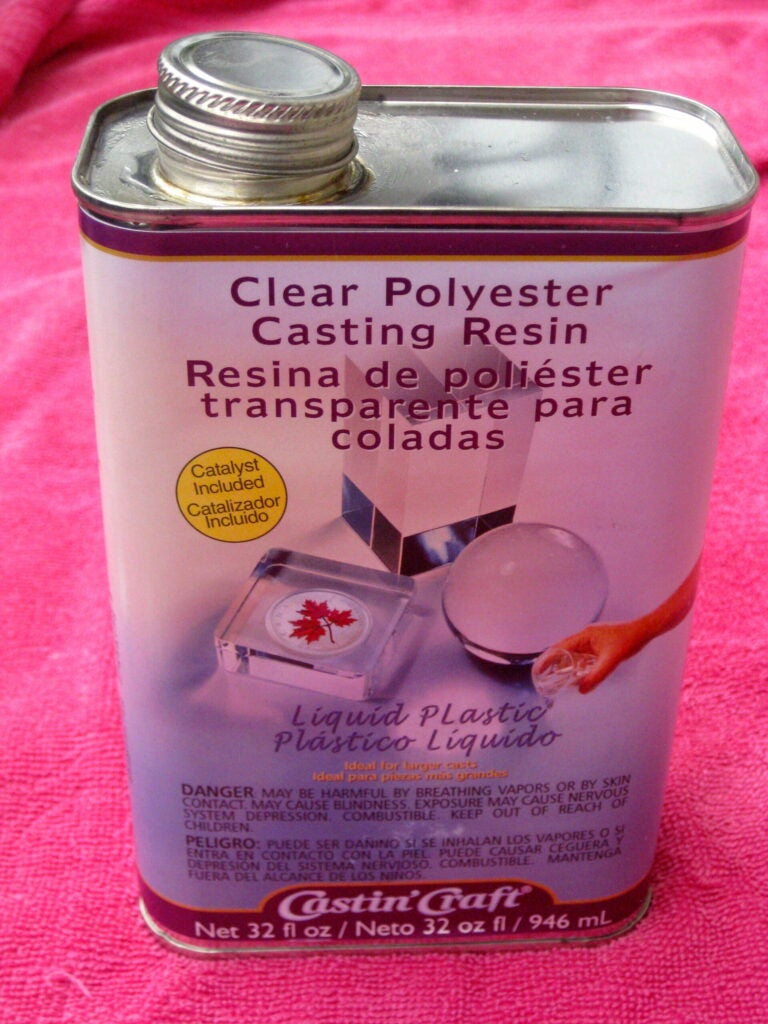 Use a clear resin to set the insect. It’s really smelly, so make sure you’re working in a well-ventilated area. Spread an old towel over the workspace in case of spills. 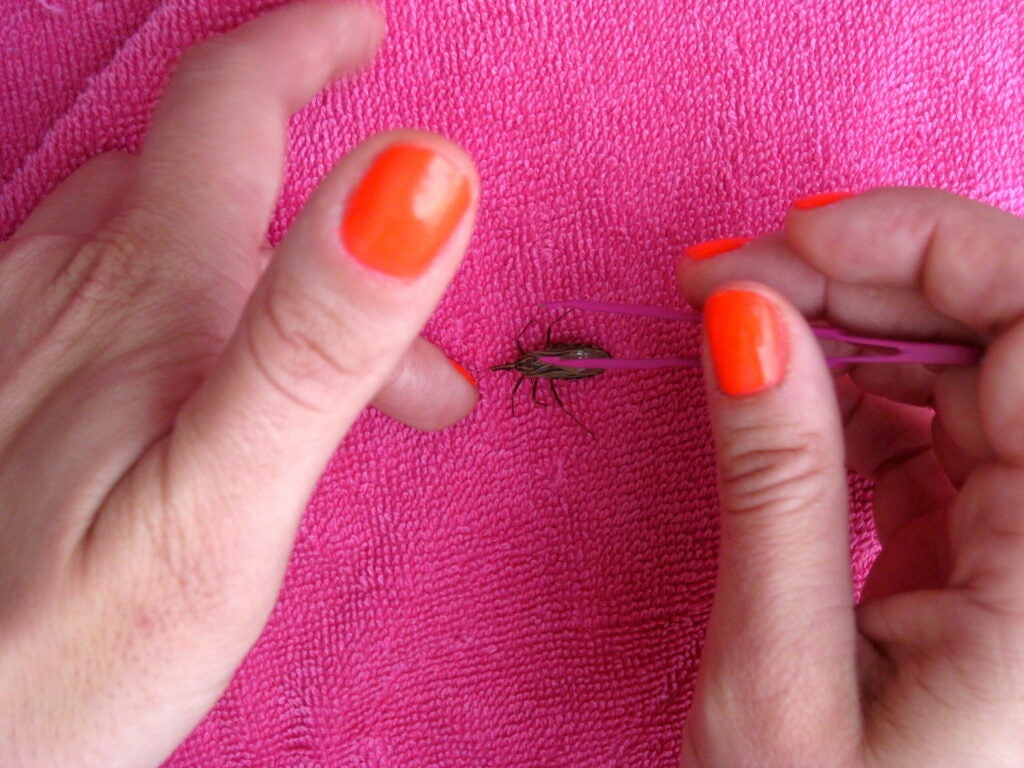 Use the tweezers to arrange the bug’s legs, etc. 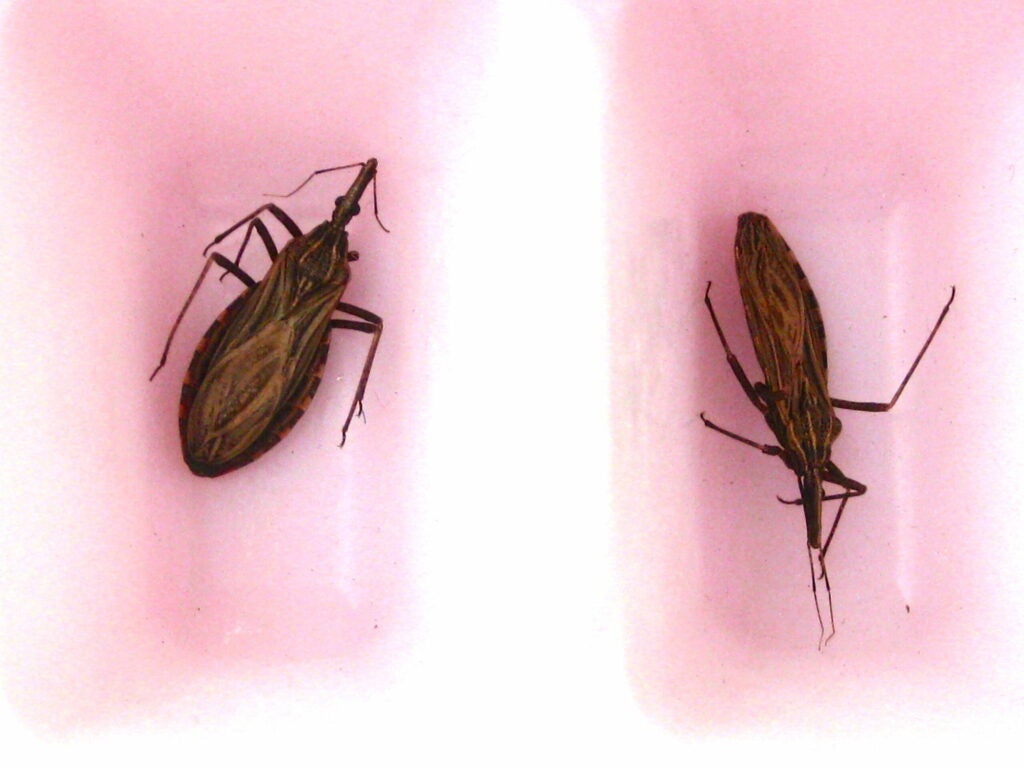 A close-up of kissing bugs in the ice cube trays. Mmmm. Note that these bugs were all dead and had been preserved in alcohol for a long time, so although there may have been parasites in them, those parasites were also dead. 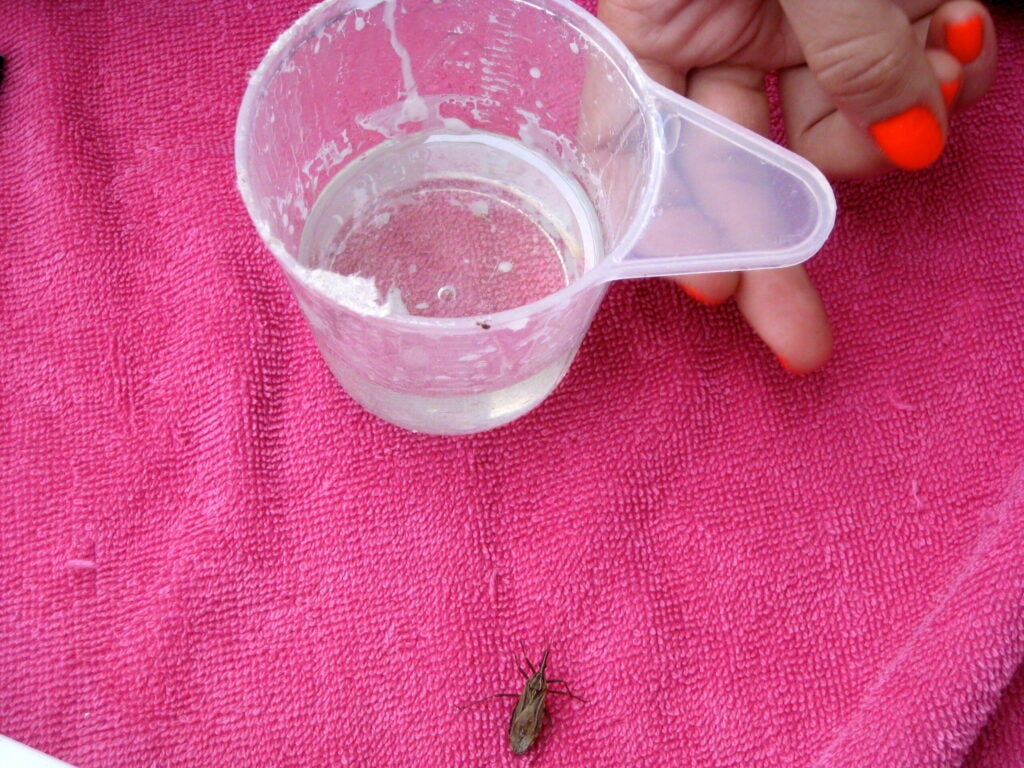 Pour the resin into a measuring cup and add a catalyst (not pictured, comes with the resin). The catalyst allows the resin to harden. 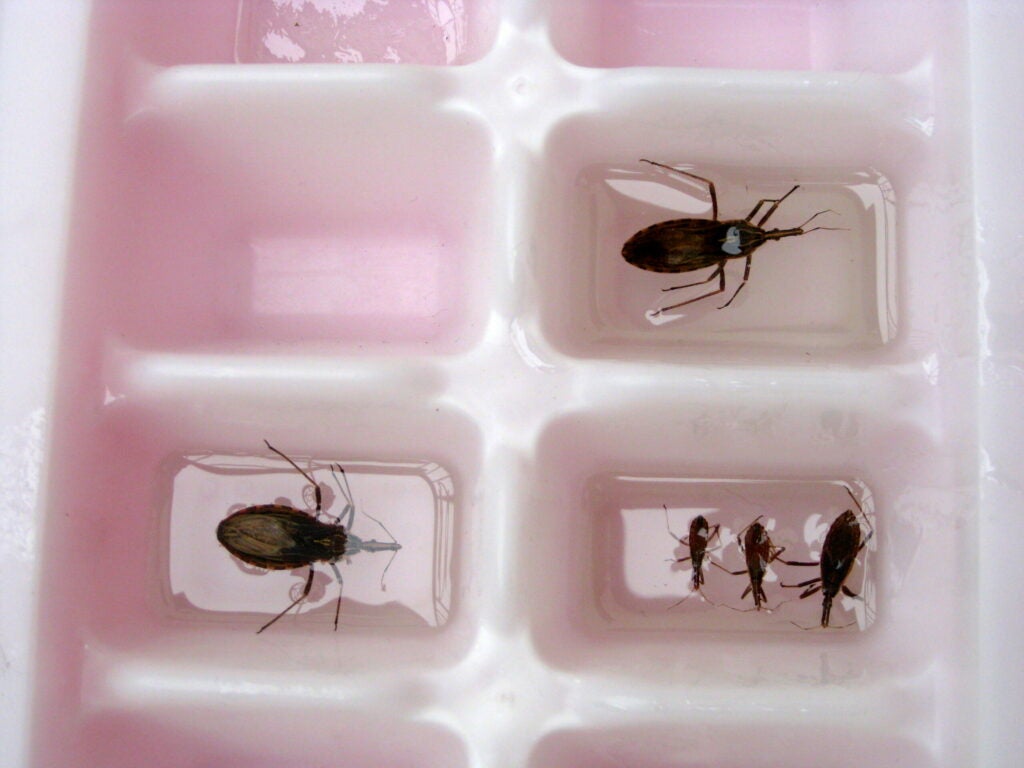 Arrange the bugs in the ice cube tray and fill each mold about halfway. Wait 5-10 minutes (maybe longer) for this half to harden before filling the rest of the mold with resin– otherwise, the bugs just float to the top. 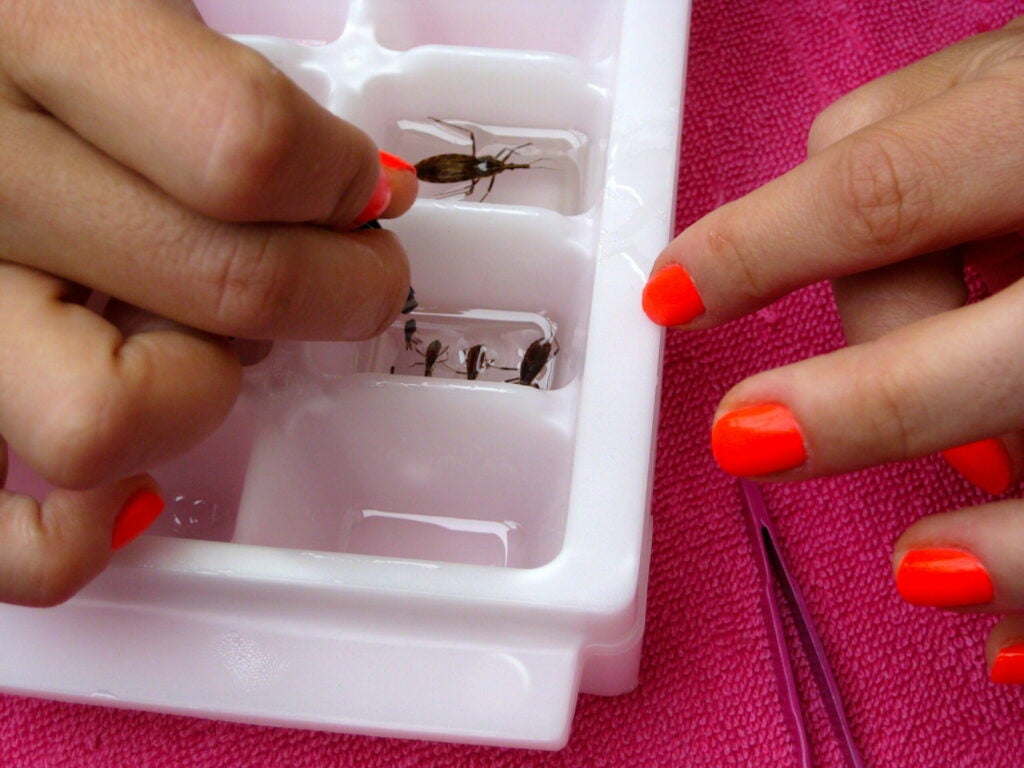 The bugs may drift as the resin hardens. Use tweezers to keep them in line. 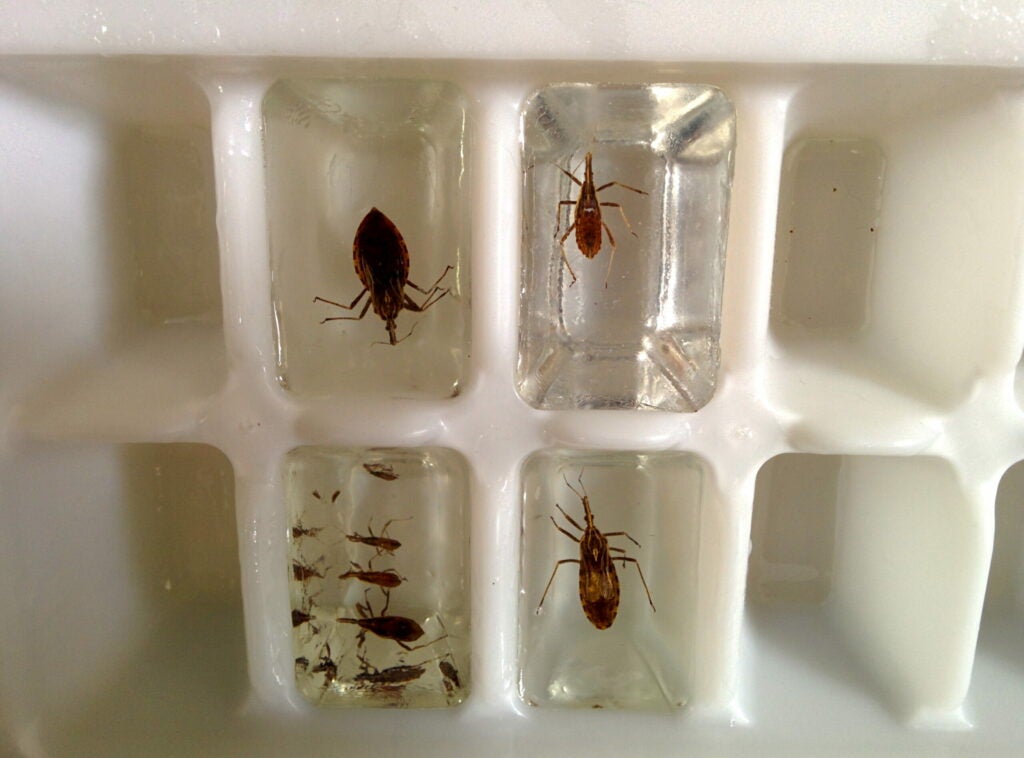 Wait for the resin to harden entirely before removing from the tray (and don’t be mean and sneak any into your friends’ drinks, okay?) 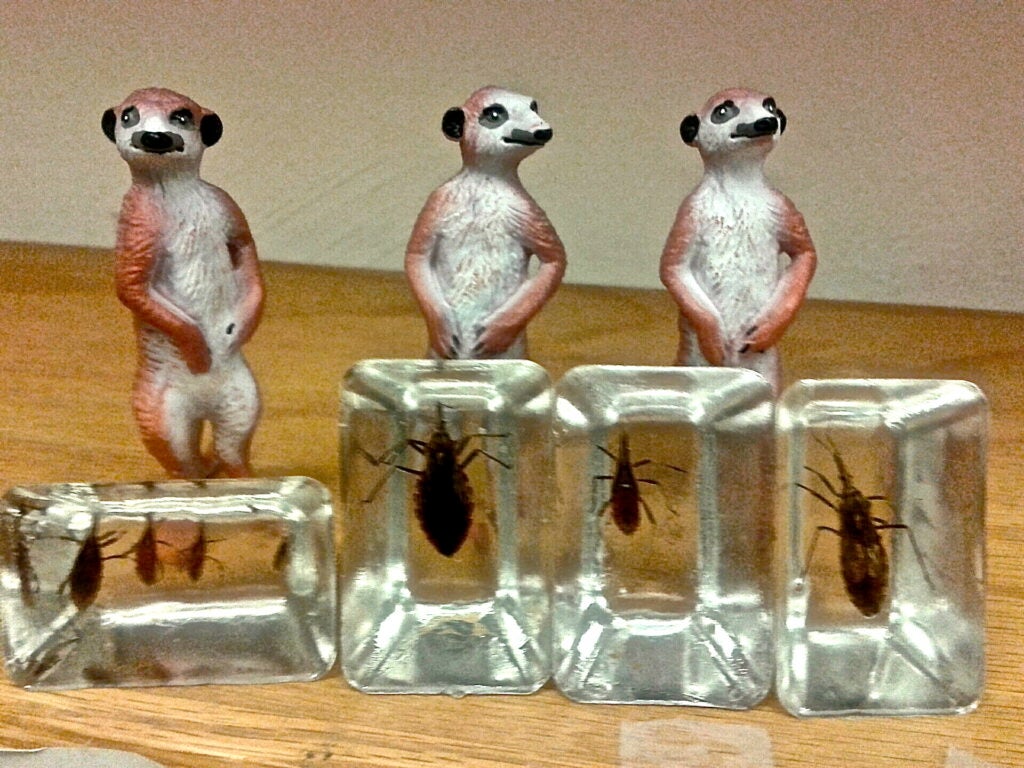