Chanting “Party Hard!” While A Man Gets Zapped With A Million Volts

Andrew W.K. soundtracks David Blaine's newest stunt. Turns out, when you add stupid to stupid, you get something a little bit transcendent. 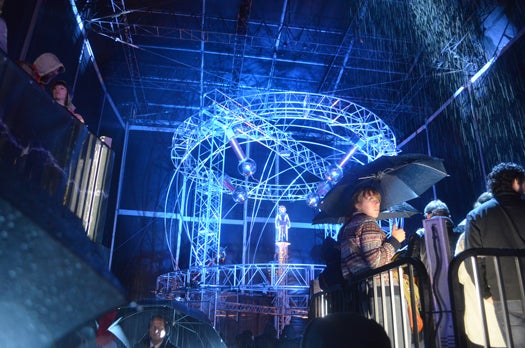 David Blaine is still perched on a 20-foot-high platform on Pier 54, jutting out from West 14th Street in Manhattan into the Hudson River, with seven giant Tesla coils shooting about a million volts of electricity directly at him. It has not been one of Blaine’s more successful stunts, partly because it’s not very dangerous. He’s wearing a helmet and a “Faraday suit,” which looks like (and, actually, mostly is) a suit of chain mail armor. It’s made of some highly-conductive material, like steel, so the current, though scarily visible, doesn’t actually touch Blaine’s body–it’s blocked by the suit, which directs it harmlessly away. The helmet, which looks like a steel-caged fishbowl, performs the same duty, and Blaine’s actually wearing a UV-protected red plastic visor so his eyes aren’t damaged by the bright light of the visible current. The Daily Mail talked to a 69-year-old physicist who said “the stunt is so safe, I’d do it.” The challenge is mostly that the guy has to stand up for 72 hours straight, which is, you know, pretty tough, but not exactly death-defying.

I knew the stunt would be kind of boring. That’s not why I went, last night, to stand outside in the first cold rain of fall without an umbrella. I went because somebody had the brilliant idea to hook up a piano to the Tesla coils so the notes were translated into powerful bursts of voltage–and the further brilliant idea to invite Andrew W.K. to play it, his every absurd note sending a corresponding lightning bolt at Blaine. A statement from Andrew, who, you’ll note, uses an exclamation mark after every possible sentence:

“A 1,000,000 volt keyboard??? This is absolutely a once in a lifetime musical experience and probably the most dangerous musical instrument ever created! I’m absolutely electrified and terrified by the opportunity to play a keyboard solo with so much energy, and to use this incredibly powerful device to send a musical surge through David’s brain! I just hope he can withstand my high-powered party piano playing!”

At 7:30 I walked towards Pier 54 from the subway station. By the time I got to 10th Avenue, a couple of blocks from the pier, I heard it. A Tesla coil makes an unearthly noise when played melodically, like a buzzy alien trumpet. It was an oddly fitting soundtrack to that stretch of Manhattan, which in the daytime looks like an All Saints store. As I got closer to the pier, it began raining harder. I hadn’t brought an umbrella; I’d packed my bag instead with a notebook (soaked, useless) and a fancy camera (soaked, probably ruined). The line moved quickly; it was not crowded there. I got in and walked past the plastic-wrap-covered Intel propaganda (one screen read “The Power of the Microprocessor”; nobody but me stopped to read it). At the end of the audience area were a few platforms. Up on the center platform, standing next to guys with modest gauges in their ears, you could look down and to your right and see Andrew, in his dirty white t-shirt and dirty white jeans, excitedly hammering away at the piano, his long black hair bouncing up and down. Directly in front of us was Blaine, looking more like a medieval scuba diver than anything else, surrounded by those seven spherical Tesla coils. Mostly Blaine seemed relaxed, sometimes giving an arm signal to those controlling the machine, though every once in awhile a particularly hard bass note actually made him jump with pain. (That’s more from the force of the energy than from the amount of voltage.)

Andrew W.K. is a much better piano player than people give him credit for, but when he’s given free rein to do whatever he wants, he mostly plays like a 13-year-old kid. He dicks around, playing arpeggiated major chords and scales, sometimes slamming on the keys with the heel of his hand to see what’ll happen, sometimes bursting into whatever song he can remember how to play (sometimes it was one of his own, sometimes it was a ragtime of some sort, once it was the Star-Spangled Banner, and once it was “Come Sail Away” by Styx, for some reason). But the thing about Andrew W.K. is that despite his semi-metal thing, his hard-partying thing, and that whole bloody-nose-cover-art thing, his music is, for the most part, strikingly innocent, catchy in an almost 1970s power pop way, and kind of childlike. His best song, “She Is Beautiful,” is almost shy; it’s noisy and he’s snarling, sure, but it starts off with the couplet “I never knew girls existed like you // And now that I do, I’d really like to get to know you.” He just wants to have fun. That’s what “party” means to him; it’s not really about getting drunk or doing drugs or being destructive, it’s having fun in whatever way the listener interprets fun.

His music is also incredibly stupid. He has songs called “We Party (You Shout),” “Party ‘Til You Puke,” and “Make Sex,” and he doesn’t sing so much as shout the title of the song over and over again. And his music is great not despite being incredibly stupid but because it is incredibly stupid. It makes other music sound pointless; why bother messing around with subtlety and irony and volume not cranked all the way up when you can have the shameless, unadulterated joy of partying? An Andrew W.K. song forces you to empty your mind and just enjoy the loud, pretty noises. It’s somehow more pure than other music. It’s so stupid it almost turns around and becomes smart.

That’s how this David Blaine performance was. As Andrew W.K. headbanged his way through “Party Hard,” the crowd chanted along with him, and even David Blaine (who never, ever smiles) was clearly having a great time. We were soaking wet, singing along with some of the stupidest lyrics ever conceived, while a man on a pedestal was electrocuted, repeatedly. It felt like the way we’ll spend our Friday nights in a hundred years, on the moon–physically uncomfortable, with big dumb grins on our faces, pointing and shouting at a man in a cage as he’s (harmlessly) tortured and grinning back at us.

Andrew W.K.’s 35-minute set was bizarre and joyous. It was one of the stupidest events I’ve ever been to, but sometimes, when you keep adding stupid on top of stupid, you get something maybe a little bit transcendent.