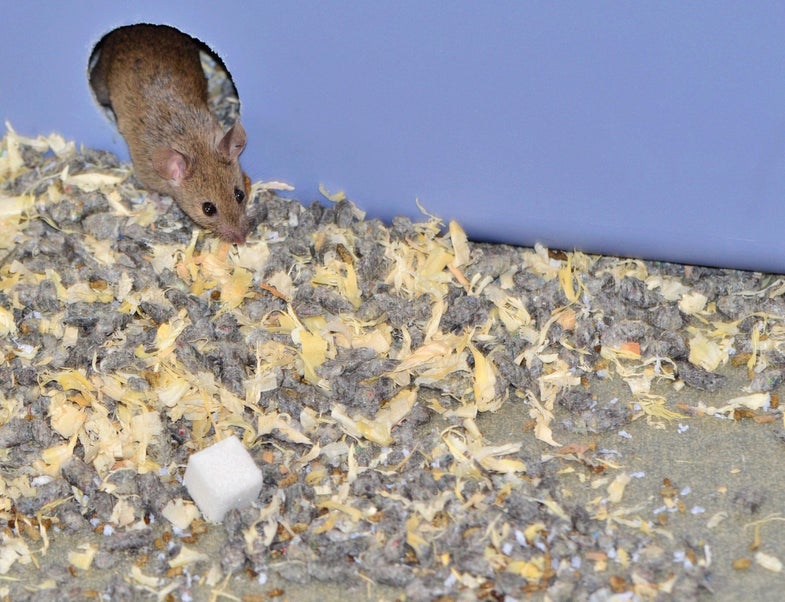 Update: I’ve changed the headline and some sentences in this post. Previously, the headline and one of the text highlights in this post called the mice “soda-drinking.” As the post explains, the mice drank a fructose-glucose mix, not soda. I made the changes because I wanted to make it clear that the study aimed to investigate the effects of added sugar to the diet, not soda specifically. I also added that the 50-50 fructose-glucose mix is not only chemically similar to high fructose corn syrup, which is what the researchers were aiming for, but also to sucrose, or table sugar. I hope these changes help. -FD

Well, good thing this never quite happens to humans. Or does it? In an unusual study, a team of biologists raised a bunch of wild mice—not the docile lab mice most scientists use—on a healthy diet, plus a sugar mix that’s roughly equivalent to drinking three sodas a day as a human. Then, the scientists stuck their mice in a natural environment where they had to compete against wild mice that hadn’t been raised on the sugar water.

Female mice that drank sugar water had shorter lifespans, and their male counterparts fathered fewer pups.The study is the first to examine, in lab animals, the effects of added sugar intake at levels that are equivalent to what some humans normally consume, say the study’s authors, a team of U.S. biologists. Thirteen percent to 25 percent of Americans get a quarter of their daily calories from added sugar, just like the mice in this study. That sugar comes from things such sodas, baked goods and many packaged foods. Scientists have vigorously debated the effects of such levels of sugar consumption on human health. Some call added sugar in the diet toxic. The scientific evidence about sugar is still developing, in part because previous animal studies aimed at finding the ill effects of sugar have always given mice and rats much more sugar than humans normally consume.

Wayne Potts, a biologist at the University of Utah and the study’s lead scientist, interprets his findings as a warning. “If it makes a mouse sick, then do you want it in your body? At least before we work out the mechanistic basis of that sickness and are able to evaluate whether it’s also going on in humans or if it’s an mouse-specific phenomenon,” he tells Popular Science.

Others are more conservative about linking mouse outcomes to what would happen in humans. “The way mice react to sweetness and sugar is different than humans,” Barry Popkin, a nutrition researcher at the University of North Carolina, wrote to us in an email. He added there’s no direct way to translate this work into human work.

Mice react to sweetness and sugar differently than humans do.Either way, the experimental setup was fascinating and unusual. Potts and his colleagues got 156 mice and split them up into two equal groups. One of the groups began drinking a 50-50 fructose-sucrose mix as soon as they were weaned from their mothers’ milk. At that age, they’re “kind of teenage mice,” says James Ruff, a graduate student in Potts’ lab who is the lead author in the new study, published today in the journal Nature Communications. The 50-50 mix reflects the chemical makeup of sucrose, or table sugar, and is also similar to that of high fructose corn syrup, a common added sugar.

The other mouse group didn’t get the added sugar mix. Both groups ate mouse food with a healthy balance of the nutrients they need. When the mice became adults, Potts, Ruff and their colleagues put the animals in a pen with optimal and sub-optimal nesting boxes and let them compete for mates and nests. Most lab mice never see such an environment their whole lives. Instead, they live in individual cages.

The biologists followed the mice’s fates for 32 weeks, nearly their entire lifespans, which runs to about a year, Ruff says.

From this Darwinian pen, the biologists found that the female sugar-mix mice were twice as likely to die during the study. The male mice didn’t have different lifespans, no matter their diet. But the males who drank the sugar mix controlled 26 percent fewer territories and fathered 25 percent fewer pups than the males that ate mouse chow and drank a cornstarch mix in place of the sugar water.

The study was not set up to answer why the males fathered fewer pups or why the females died earlier. “The problem may be in the cardiovascular system, muscular system, reproductive system,” Ruff says. “They use all of their systems to successfully compete.” Thus, it’s difficult to know whether these things could happen in other animals, including humans, that consume equivalent amounts of added sugar. Instead, the study offers a holistic view that Potts believes helps researchers detect small effects that would be difficult to find otherwise. Potts thinks there haven’t been other papers on the effects of moderate sugar consumption in mice not because other scientists haven’t tried such experiments, but because they then didn’t find any interesting differences.

What’s next? Ruff and Potts, who trained as an evolutionary ecologist, have already used what they call their “semi-natural” environment to quantify the effects of inbreeding on evolutionary fitness. (In case you’re curious, mice born of first-cousin parents are about 30 percent less fit than non-inbred mice.) Now, they’re interested in testing pharmaceuticals. Many medicines that seem promising in lab animals turn out not to work when tested in humans. Ruff hopes that their environment could better catch medicines that don’t work before they move onto human trials.