The New Google/Motorola Moto X Smartphone Is A Quiet Delight

The difficulty and virtue of quiet is too often overlooked. 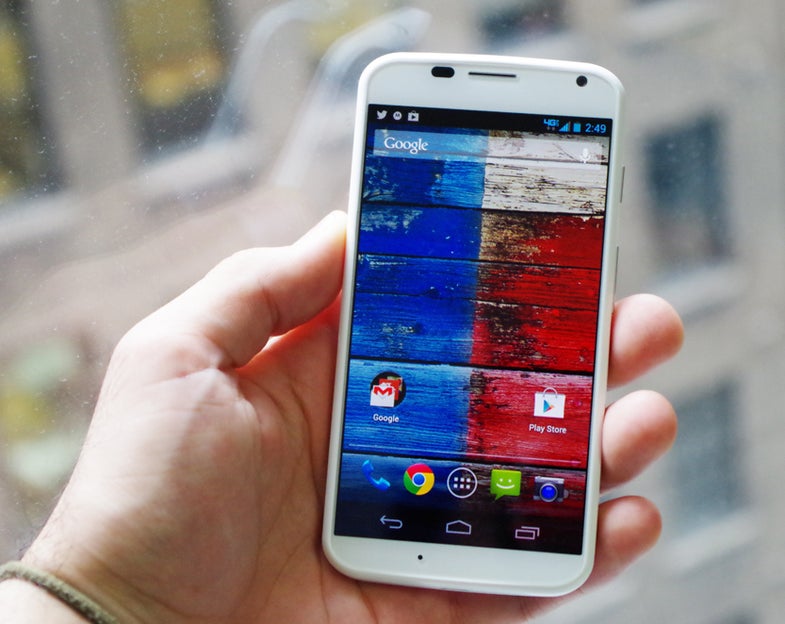 “Motorola’s Moto X Must Be Game-Changing — Or Else,” writes Tim Stenovec, threateningly, at the Huffington Post. “With Moto X, Google Android is about to have its iPhone moment,” writes Kevin Tofel at GigaOm. Christina Warren at Mashable asks if the Moto X can “revive Motorola’s brand.” Motorola is the fourth-biggest phone manufacturer in the U.S.; they’ve been around for 85 years and have twice in the last ten years completely changed the landscape of mobile phones (the RAZR, in 2004, and the original Droid, in 2009), which is more than most companies can say. They’re owned by Google, a company with seemingly endless coffers. They’re doing fine, guys.

This is all ridiculous. Not everything has to be revolutionary. Sometimes it’s best to just step back, in both hardware and software, and do what feels right. It’s an approach that’s actually much harder than, say, Samsung’s (which is a throw-everything-at-the-wall strategy); Motorola says they actually figured out the idea average volume of a phone’s physical size. That takes time! But the end result is something that feels right not something that shouts at you. 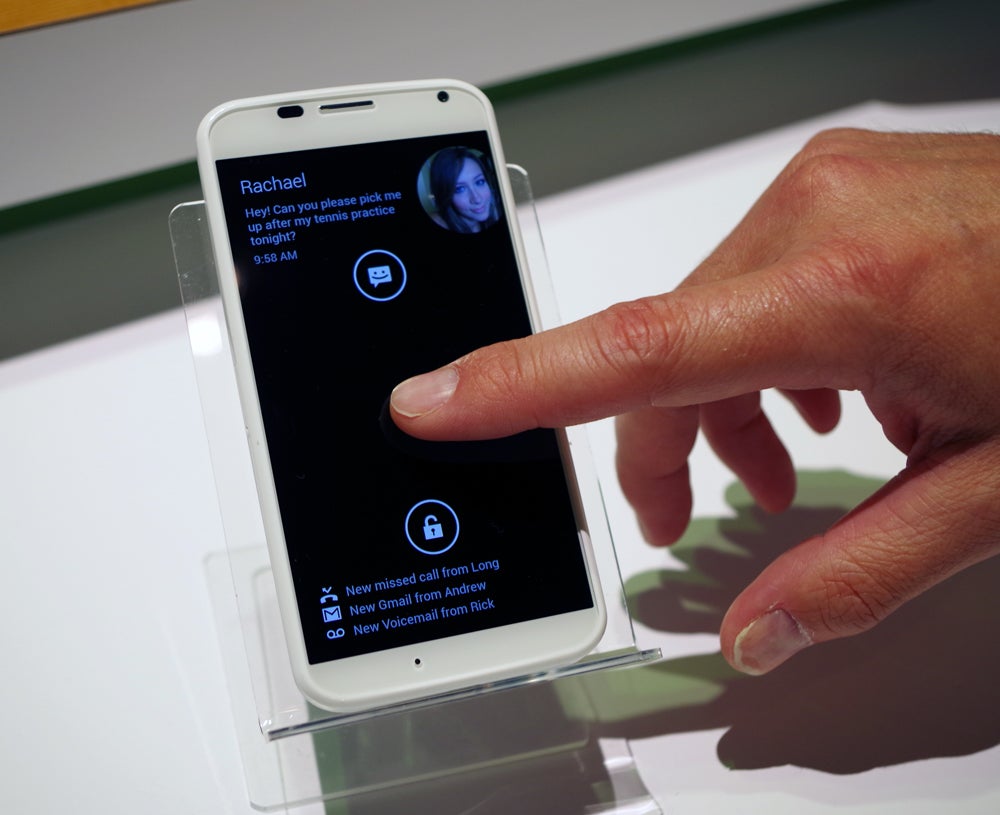 I have a Moto X in front of me, and what’s sort of refreshing about it is how it doesn’t feel like a big deal at all. In a joint press conference, Google and Motorola presented the Moto X to small groups of journalists, 10 or 15 at a time, earlier this morning. They encouraged us to ask questions, even to interrogate them. It was friendly and intimate in a way that couldn’t be more opposed to the bombastic Michael-Bay-goes-Broadway absurdity of the last big Samsung launch. And the phone is like that, too. It’s just…nice.

The screen, at 4.7 inches, is big, but the body is not; the bezels are very small on the sides and the top and bottom borders are about half the height of the iPhone’s. It is the first phone with a screen anywhere near that size that I can actually use one-handed, since the smaller overall size allows my little tiny ballerina hands to actually reach the top corners. It’s thicker than an iPhone 5 or Galaxy S4, but it’s rounded in the back and comfortable to hold. (The battery, Motorola tells us, had to use a unique “stepped” design to fit into that curve.)

“We’re trying not to add complexity,” says Rick Osterloh, Motorola’s senior vice president of product management. “On an average Android phone, the homescreen is filled with stuff.” They didn’t entirely succeed; new features include “Active Display,” which provides you with notifications when you flip the phone from face-down to face-up; “Quick Capture,” which boots you into the camera app if you “give the phone a twist like a screwdriver”; and a camera that does not tap-to-focus like every other camera with a touchscreen ever made. If you’re on AT&T, you can get the Moto X is a variety of colors, from tasteful to absurdly garish. Want a poop-brown back with neon pink volume buttons and an engraved message on the back that says “IM W/ GRUMPYCAT”? No problem. 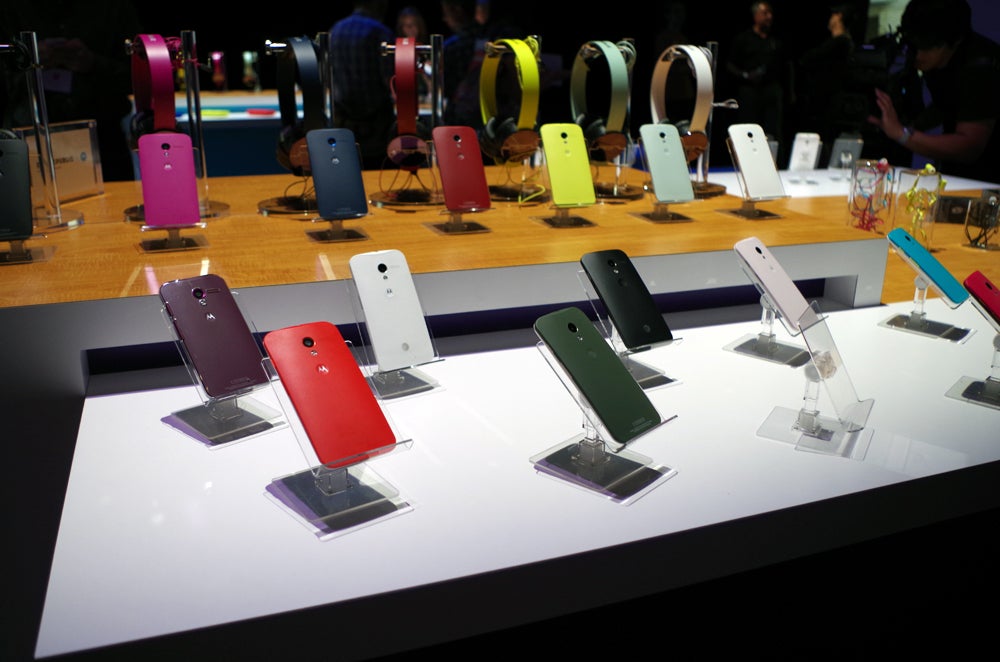 The phone is at least as fast and responsive as the HTC One or Nexus 4, the two fastest Android phones I’ve tested. The screen, at 1280 x 720, is super sharp and clear. The battery is about as big as the HTC One’s, but the phone itself is smaller. All is as it should be.

That “Active Display” mode automatically decides what your most important notification is, thanks to a hierarchy of notifications Google has compiled. There’s a group of features called Motorola Assist that automatically adjust your settings when you’re in a meeting (based on appointments in your Google calendar), when you’re in a car (based on GPS location), or when you’re sleeping. Google Now automatically does, well, everything. And now to use Google Now or Google’s excellent voice command feature, you don’t even have to unlock your phone. Just say “OK Google Now,” a similar command to the “OK Glass” command that wakes up Google Glass. Then you can say “wake me up at 6a.m.,” or “call Steve,” or “did the Mets win last night?” (I saw the latter demonstrated; Google said “no, the Mets lost to the Marlins.” It was pretty cool.) The whole point is to do less. Fewer button presses, fewer trips to the settings menu, fewer taps and swipes and clicks and holds and pinches.

The whole point of the Moto X isn’t to be a “game-changer,” it’s to be a very good cellphone that you’d like to use. And it is! The hardware isn’t as eye-catching as the HTC One, but it’s more comfortable to use day-to-day. It’s available on all major U.S. carriers at $199 on contract, starting in late August or early September, depending on your carrier (we weren’t given specifics on this). It’s probably the phone I’d recommend, because like the iPhone, the Moto X just feels comfortable. It’s not doing anything crazy. It’s just good. And that’s a very mature place for Google to be.