BAE Systems’s Adaptiv technology enables objects as big as tanks to completely vanish from view–when seen at night with an... 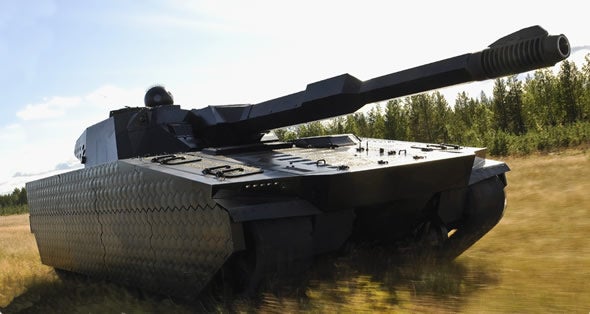 BAE Systems’s Adaptiv technology enables objects as big as tanks to completely vanish from view–when seen at night with an infrared sensor, admittedly, but that’s still a major advantage. An Adaptiv-outfitted tank can change its thermal signature to look like anything from a big rock to a truck to nothing at all, fading into the background and becoming invisible.

We’ve seen a few kinds of invisibility before–there’s BAE’s own e-ink-based concept, as well as ideas ranging from crystals to metamaterials. But Adaptiv simply uses a system of hexagonal panels, a few inches in diameter each, designed to change temperature very quickly. The BBC says it takes about a thousand of these panels to cover a tank, but when it’s covered, it can change its thermal signature at will.

At night, militaries use infrared to see in the dark without being seen themselves, but IR only sees heat, which means it can be fooled. This system constantly maps its surrounding heat signature and mimics it, effectively making the tank completely invisible to infrared. Of course, it can also be made to look like any other, presumably more innocuous, object. BAE says Adaptiv also adds armor to tanks and can be installed at a comparatively low price, and could be ready for production within two years.