As the Army Fights the Mississippi River, Who Is Winning?

The river is trying to escape the path that humans have determined for it, and increasingly it is doing so 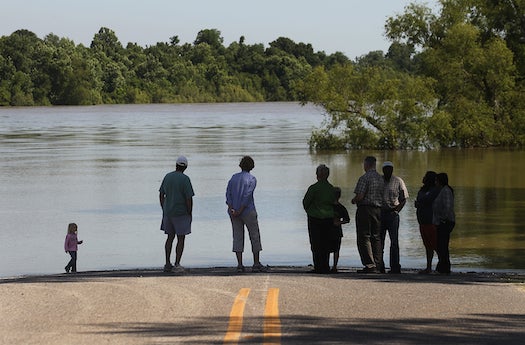 KROTZ SPRINGS, LA - MAY 15: People look on at the flooded at the flooded Atchafalaya River during a mandatory evacuation on May 15, 2011 in Krotz Springs, Louisiana. The Morganza Spillway floodgates were opened for the first time in nearly forty years yesterday to lower the crest of the flooding Mississippi River. St. Landry Parish officials ordered a mandatory evacuation today for around 2000 residents in Krotz Springs and nearby Melville, Louisiana. (Photo by Mario Tama/Getty Images). Mario Tama
SHARE

The ongoing flooding along the Mississippi River is the worst the region has seen in recent memory–all three of the river’s three major spillways are open at the same time for the first time ever, diverting flood waters from New Orleans and one of America’s major fuel refining corridors. Other areas aren’t so lucky; water flowing from Louisiana’s Morganza spillway (one of the big three) is flooding the Atchafalaya River basin, displacing some 4,000 people. Scenes of inundated towns, rooftops peeking above the water line, are playing out from the upper Midwest to the Gulf of Mexico.

But while the 2011 floods are the worst in years, for many places they’re not the worst in that many years. The Big Muddy is topping its banks and barriers more frequently and with greater consequences than flood models tend to predict. There are several reasons for that depending on who you ask, but regardless of whether it’s global warming, bad flood modeling, or simple statistical anomaly, one thing is abundantly clear: the mighty Mississippi wants out of the path that humans have determined for it, and it is increasingly finding ways to escape.

The Army Corps of Engineers often speaks in terms of 100-year or 25-year floods (a somewhat confusing nomenclature that means a flood of a given magnitude has a 1-in-100 or a 1-in-25 chance of occurring in a certain year, respectively), but since 1993’s devastating Midwestern floods, some places in the region are seeing 10- and 25-year events several times in a single decade.

From an engineering and infrastructure standpoint, this is becoming a serious problem. Fighting back the waters is an ongoing fight–and if one were to judge from the Corps’ decision to blow some levees in Missouri earlier this month to relieve pressure upstream, it’s a fight that we aren’t necessarily winning.

Click to launch the photo gallery
Some residents are taking civil engineering into their own hands. Click through the gallery to see some DIY efforts to beat back the floodwaters.

“The river has a job to do,” says Robert Criss, a professor of Earth and planetary sciences at Washington University in St. Louis. “Its job is to move water and dirt to the Gulf of Mexico. It has adjusted its morphology in the most efficient way that it can to do that. But of course we think we know better, so we’ve changed that.”

Criss refers to the complex system of levees, dikes, spillways, and locks, that have been constructed along the length of the river to make it straighter, deeper, and more conducive to moving goods along its length. From a geoengineering standpoint, the Mississippi is a modern marvel, a massive case of humans bending nature to their will through clever engineering and lots of concrete. But the river is pushing back.

Take the lower Mississippi, right at the point where it hits the homestretch to the Gulf. The river wants to take a new path to the Gulf, one that is 150 miles shorter. Doing so becomes a more tempting proposition for the river with every passing year. As the river carries more and more sediment downriver to the Gulf, its path grows longer and longer, forcing it to deposit more sediment upstream to maintain sufficient force to make its way to the Gulf.

This puts additional stress on the river system, stress that would be relieved if the river turned west and down through the Atchafalaya River, which connects to the Mississippi some 45 miles north-northwest of Baton Rouge, and headed on out to sea. Holding it back is the Army Corps of Engineer’s Old River Control Structure (completed in 1963, it is indeed old). If the Old River Control Structure were to fail–and infrastructure does fail, as Americans learned the hard way when Katrina hit–the map of the Mississippi Delta would be redrawn in a matter of hours, with devastating consequences. 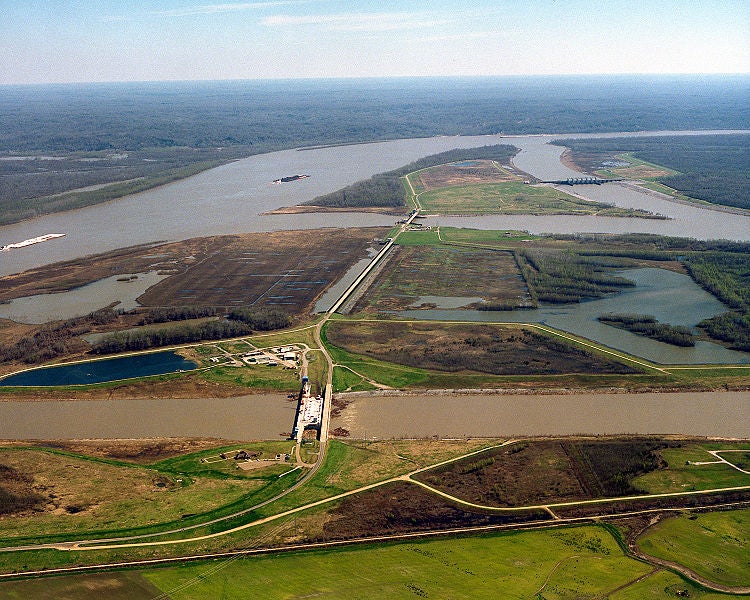 Last week the executive director of the Port of New Orleans said that closure of the Mississippi due to the most recent flooding would cost nearly $300 million per day. If the main thrust of the Mississippi took the Atchafalaya route and bypassed New Orleans to the west, the city would need a new livelihood and America would need a new port city and all the infrastructure and pipeline that comes with it. That’s not even counting the losses from the areas that would flood and become unusable through the Atchafalaya basin.

The results would be economically crippling, at least for several years. And the same argument can be made all along the entire 2,300-mile length of the river (and along every major waterway in America). So we instead must keep building, and occasionally making undesirable tradeoffs, like the one the Corps of Engineers was forced to make two weeks ago when it blew levees along the Mississippi to save the town of Cairo, Ill., flooding 130,000 acres of Missouri farmland and devastating entire agricultural communities instead.

“Do you keep building the levees, etc., etc., and spending all this money?” says Dr. Thomas Zimmie, a professor of civil and environmental engineering at Rensselaer Polytechnic Institute. “In most cases, you don’t have much choice. There are more than 100,000 miles of levees in the U.S.,” almost every one of them protecting some enclave of residential, agricultural, or commercial life.

Zimmie was part of the team of engineers that assessed New Orleans’ broken levees for Congress in the aftermath of Katrina, and he heard the criticisms bouncing around the national conversation after that storm saying New Orleans, a city below sea level, was a lost cause. But all sentiments aside, from an infrastructure point of view the rebuilding of the city–and its levees–was never in question. “You can’t abandon New Orleans,” he says. “It’s a major port.”

There’s no outright way to fix this push-pull between human development and the river, but Robert Criss, the scientist, thinks it’s possible to strike a kind of compromise.

“The levees are actually too high,” Criss says. “We need lower levees, particularly those with agricultural land behind them, and those lower levees need more gates on them.” The idea, he says, is to keep levees from overtopping, when the water tends to surge more like a dam break, scouring away topsoil and destroying farmland (and anything else in its path).

“Rather than having these levees catastrophically fail and having these tsunamis of high-energy, turbulent water scouring the farms, you crank the gates open, let the waters flow gently over the farmland,” he says. “You create wetlands for the year and those farmers can be compensated for floodwater storage the same way they are sometimes compensated for letting their land lie fallow.”

It’s a system of controlled flooding, and while it’s not a perfect compromise, it would mitigate catastrophic inundation and–in the worst cases–destruction of critical infrastructure. Zimmie likes the notion, but he’s less optimistic that such a system could be implemented.

“In theory I agree with that answer, but when you start looking into how to do it it’s not that easy,” he says. “When you start saying ‘okay, we’re going to flood this and not that,’ it’s not a real practical answer as far as I’m concerned. When you get into the nitty-gritty, it starts to get really tough.”

So the Army Corps of Engineers will keep building–and occasionally blasting–because what else can it do at this point? The river wants to change course, and we’re going to do our best to ensure that it doesn’t. Until, eventually, it does.

“The Atchafalaya distributary is going to eventually win, and the river is going to go that way,” Criss says. “Some flood will eventually undermine these structures. This is a geologic inevitability.” 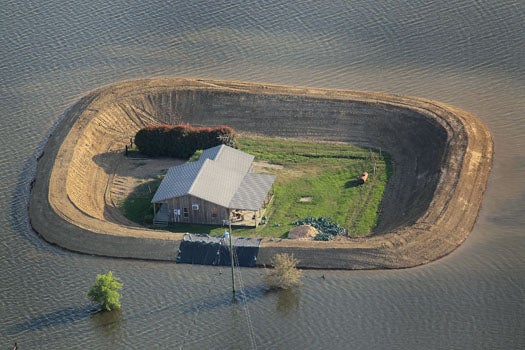 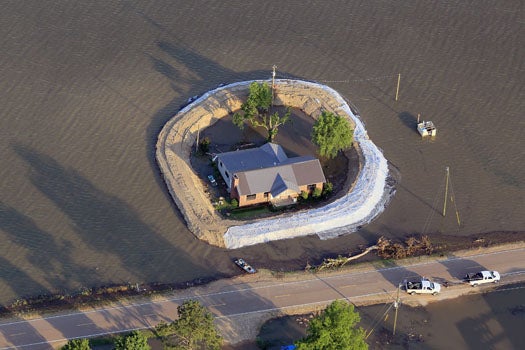 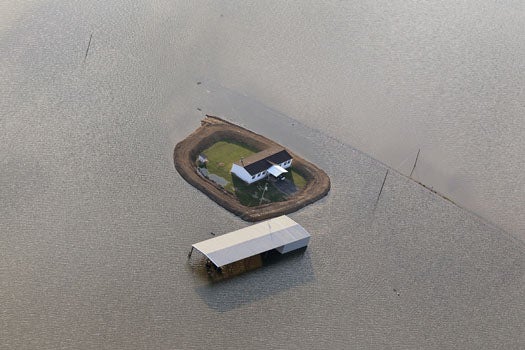 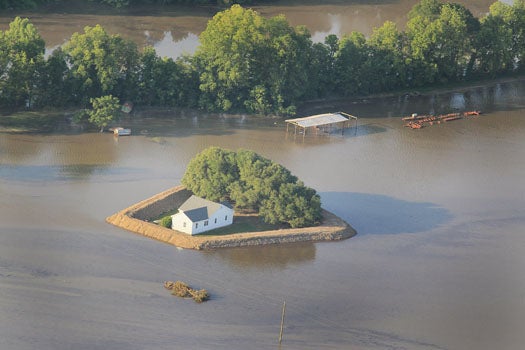 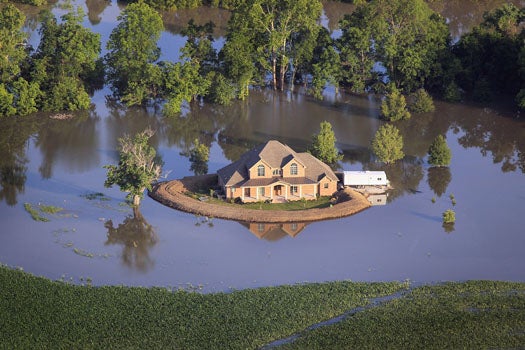 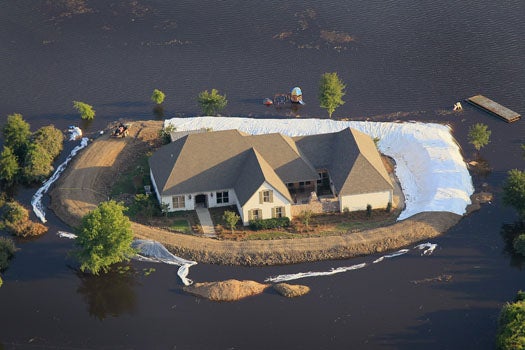 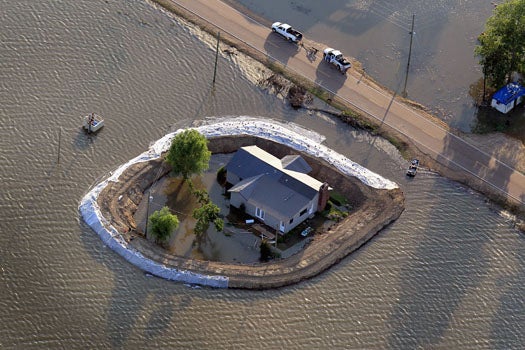 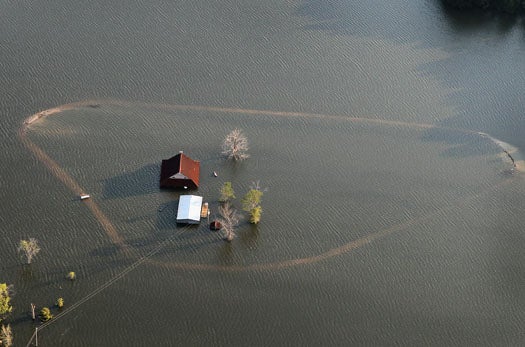 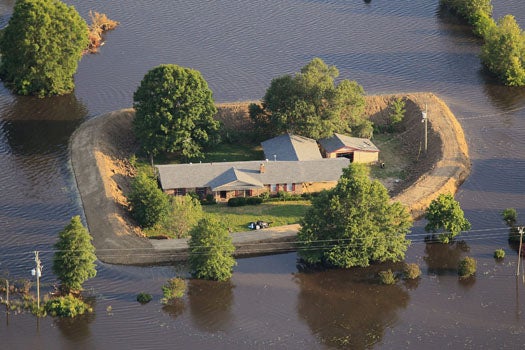