When you can print nearly anything, who will say what not to print? 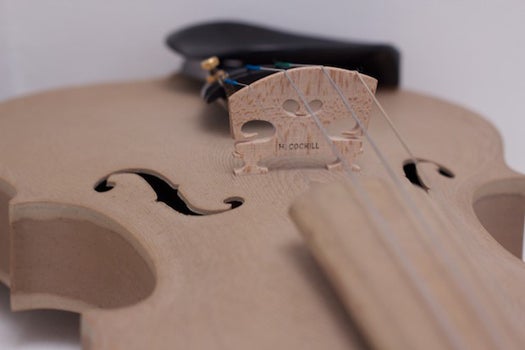 As 3-D printing in various media and materials becomes more ubiquitous, we’re starting to see some things emerging that directly challenge some norms and understandings of what craftsmanship and engineering are and can/will be. For instance, today we bring you a violin magnificently printed by German firm EOS to the specs of a Stradivarius, challenging the way we think of artisanal craftsmanship. Likewise, Thingiverse brings us two 3-D printed components of an AR-15 assault rifle, challenging the scope of our legal framework.

As for musical instruments, the Stradivarius replica isn’t the first we’ve seen–for instance, MIT’s Media Lab presented us with a smooth sounding rapid-prototyped flute earlier this year. But this violin was laser sintered to the unique and complex specifications of a Stradivarius–making it a working replica that closely mimics the hand craftsmanship of the original, even if it is made of an industrial polymer rather than wood.

It doesn’t sound half bad, either.

Perhaps more to the point of 3-D printing pushing boundaries, a couple of posts now up on Thingiverse, a site for sharing fabrication and digital design projects, don’t just challenge conventional notions of craftsmanship or IP ownership, but of the very way we’ve structured our laws. Two separate posts show how one can quickly print both a five-round magazine and a lower receiver for an AR-15 semi-automatic rifle–a rifle that is legal to own for law-abiding citizens in the U.S., but that is nonetheless an assault rifle (ArmaLite’s AR-15 rifle became the military’s M16).

That’s not to say there’s anything strictly illegal about any of this. But it does raise some questions about how 3-D printing is going to impact the world as it becomes more ubiquitous. There’s no doubt here at PopSci that consumer grade 3-D printers are going to change the world, as average folks can create things that they need on their own tabletop printers, offering a new way for companies to deliver goods to consumers and for homegrown inventors to create their own objects and implements.

But when it comes to things that people aren’t supposed to have access to–either because they are protected by intellectual property laws, or they are illegal to possess–3-D printing also takes us into a murky area. For instance, there is a legal process one is supposed to go through before obtaining a working AR-15, specifically certain components of the rifle. To quote KingLudd on Thingiverse:

Typically this part is made of aluminium. A rifle with a Lower Receiver made of plastic can be perfectly functional.

It’s illegal to buy a lower receiver outside of legal channels, but is it illegal to whip one up on your printer (the question of whether a lower receiver made of ABS plastic is actually safe notwithstanding)? A five-round magazine is perfectly legal, but what happens when someone starts cranking out high-capacity magazines that wander into legally dubious territory? (To his credit, KingLudd poses these questions himself on Thingiverse and asks where the line should be.) 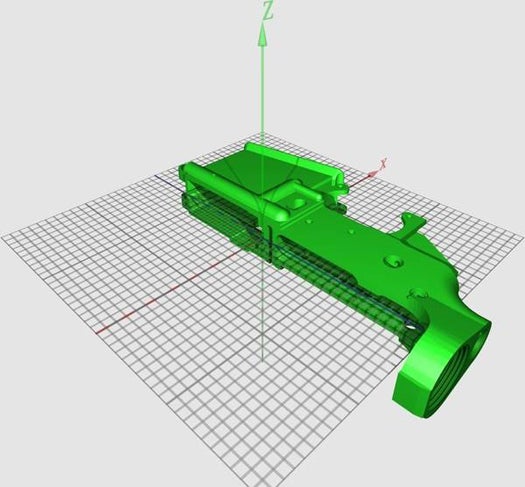 Of course, the same questions could be asked of the skilled machinist who simply cranks out all of these components in a machine shop. But 3-D printing makes this sort of thing far more accessible, bringing the capacity to create complex objects to just about anyone. Download a CAD file, click print, have a coffee while your object–whatever it may be–comes together. Right here on this very blog we have mused that the pentalobe fasteners Apple uses to keep people from tinkering with the iPhone 4 will soon be rendered obsolete, as we’ll all easily be able to print out the unique tool that fits them. Of course, we, and our friends at iFixit, like to think of that as a good thing for iPhone hackers who should be able to do whatever they like with an object they have purchased.

But what about the assault weapons hacker, or the forger of IP-protected components? If you can copy the handiwork of the Stradivaris, what can’t you copy? What if you could just print all the components of an iPhone from a downloaded file without ever paying for the phone?

Clearly that’s not the same thing, but these are interesting questions all. As 3-D printing moves us, layer by sintered layer, to new highs in tabletop innovation, customization, and manufacturing (let alone dream projects like these), we’re going to have to grapple with such legal (dare we say moral?) issues at some point. And as the technology proliferates, both in terms of the media it can create in and in its availability to the average individual, it’s going to be much more difficult to manage the availability of anything–from an expertly designed musical instrument to an AR-15–at the level of production. Because production can, and will, happen everywhere.