Tank camouflage has come a long way since the good old days of painting them green and slapping a white... 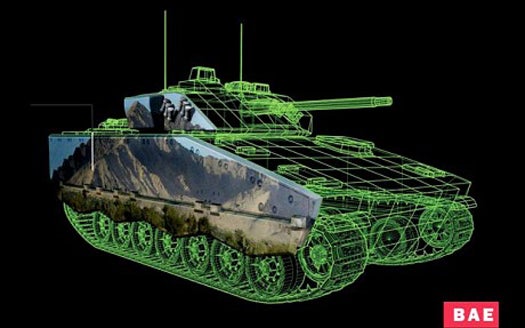 Tank camouflage has come a long way since the good old days of painting them green and slapping a white star on the side. British defense tech firm BAE Systems is developing an active “e-camouflage” system that will employ a form of electronic ink to project imagery of a vehicles surrounding terrain, rendering the vehicle somewhat invisible to potential attackers.

Using a set of electronic sensors attached to the tank’s exterior, the system would process the vehicle’s surroundings and recreate the colors, lines, and shapes common in its environment on the tank’s hull, making it extremely difficult to see. Because the images on the tank’s exterior would change as the surroundings change, ostensibly such an active camouflage system could cloak the vehicle even as it moves across an environment.

The system exists only on paper currently, but BAE scientists are confident they can make the technology work, with hopes of getting it to British troops serving in Afghanistan in coming years. In fact, the idea was born partially of a problem the troops in Helmand province are having disguising their hardware. All armored units there are painted for desert environs, making them unmistakable even at a distance when they roll into cultivated, green parts of the region.

If BAE scientists can make their active camo system work, it will likely be expensive. But it might just be worth the cost: a Challenger 2 tank, the main battle tank of the British armed services (also built by BAE) costs well more than $6 million. Moreover, the Ministry of Defense has undertaken an initiative to update the British tank fleet with far lighter, more fuel efficient, yet equally effective armored vehicles – doubtless another costly endeavor.

Aside from the obvious imperative of maintaining soldier safety, keeping their cost-intensive future tanks nimble and out of the sights of enemy anti-tank munitions could be a worthwhile investment.