NASA Heads Back to the Moon, to Uncover Its Origins and to Inspire A New Generation

The GRAIL mission launches this week 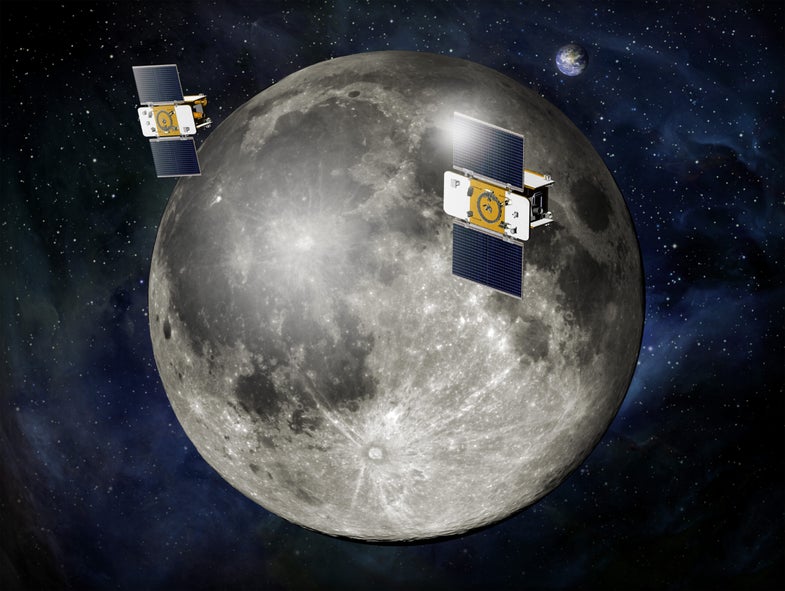 Twin spacecraft will orbit in tandem, measuring tiny changes in the distance between them to map the moon's gravitational field. NASA/JPL
SHARE

NASA is going back to the moon once again, sending a pair of spacecraft on a quest to learn the origins of our closest companion by studying its interior and its gravitational field. But beyond new lunar science, the Gravity Recovery and Interior Laboratory, GRAIL, will also help cement NASA’s legacy of lunar exploration in the public imagination.

GRAIL A and its twin GRAIL B are set to launch Thursday morning aboard a Delta II rocket from Cape Canaveral Air Force Station. The launch window opens at 8:37 a.m. EDT, although weather looks pretty iffy for the next couple days, according to NASA. Once they arrive at the moon, the two washing machine-sized probes will fly in formation, with instruments sensitive enough to detect a hair’s breadth separation. Along with those gravity-mapping instruments, GRAIL will carry something called MoonKAM — “Moon Knowledge Acquired by Middle school students.”

Logging in from schools around the country, students will be able to virtually coast a few miles above the surface of the moon, scanning the pallid dirt for craters or perhaps an open plain that might someday make a nice lunar homestead. Students can select target areas by studying topographic maps on the MoonKAM website, and send them to NASA’s MoonKAM operations center. The images will be fairly high-resolution, but they won’t approach the abilities of the Lunar Reconnaissance Orbiter, which took the snapshots we saw this week of Apollo landing sites. But that’s not the point, said Maria Zuber, a professor of geophysics at MIT and the mission’s lead investigator.

“If a student takes an image of the surface, it’s really a transformative experience. You can bet that a smart kid will take the time to sit down and figure out how to use this software,” she said in an interview.

Each spacecraft will carry a digital camera setup with four camera heads, one pointed ahead, two pointed below and one pointed behind the spacecraft’s trajectory. They can capture video and still images up to 30 fps, and downlink them to the project’s control center at the University of California-San Diego. The program is a partnership with Sally Ride Science, a company founded by Ride, the first American woman in space.

With its perennially unchanging mountains and craters, the moon is a good proxy for the early Earth, Zuber said. Understanding how it formed could shed some light on the geologic processes behind Earth’s formation, and that of the other terrestrial planets. Just last month, researchers from the University of California-Santa Cruz said the moon may have once had a smaller sibling that it absorbed after a collision. Grail will shed some light on this question, as well as explain whether the moon has a molten core, which will provide some more information about how it coalesced.

Zuber said Grail will solve a few pieces of the larger lunar puzzle.

“If you think about your family and friends and the people you know best, if you just see what they’re like on the outside, you don’t really know them,” she said. “If you really want to know them, you want to understand what’s inside of them, and that tells you what they’re all about.” 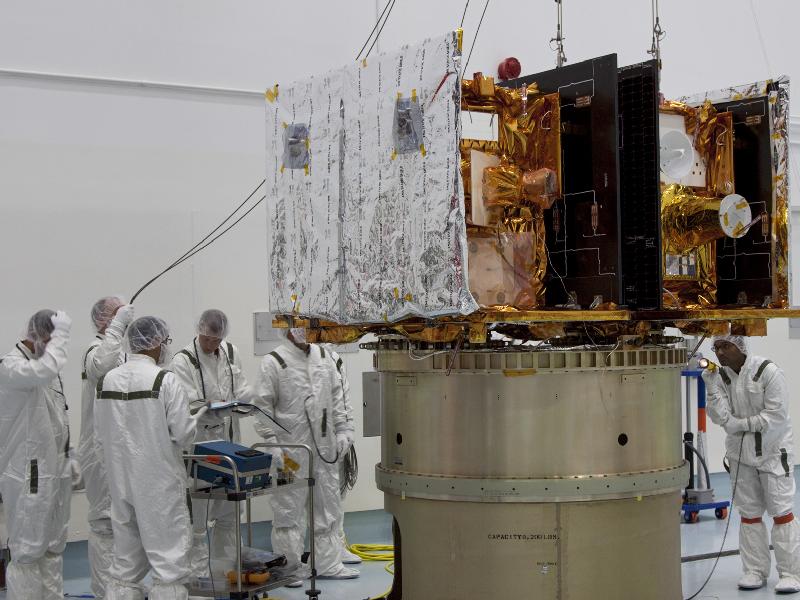 Lockheed Martin technicians verify that NASA’s Gravity Recovery and Interior Laboratory-A (GRAIL-A) lunar probe is in position and ready to be secured to the spacecraft adapter ring. GRAIL-B is secured to the ring, at left.

Grail has several unique characteristics that will help it pull this off. The spacecraft are based on a classified military satellite called XSS-11, built to demonstrate satellite rendezvous maneuvers, which helped mission planners design a system that could work well in tandem. Its avionics are modeled after the Mars Reconnaissance Orbiter, a successful mapping mission that is still sending back data. Previous gravity mapping missions, including the Gravity Recovery And Climate Experiment, also helped inform some of the project’s goals, Zuber said.

Grail’s instruments are sensitive enough to measure changes of a few tenths of a micron every second, infinitesimally small differences that result from changing topographic features. But such small differences can also be caused by other phenomena, like solar wind and fuel sloshing around in the spacecraft’s tanks, for instance. Grail scientists had to account for that, too, so they are sending Grail A and B on a lengthy, circuitous course so they burn as much fuel as possible before entering orbit.

The probes will arrive at the moon as 2012 dawns, with one arriving Dec. 31 and one arriving Jan. 1. They will spend about two months synchronizing their orbits, and once everything is in alignment, the probes will spend three months making their gravity measurements. The whole mission will be done by next June, Zuber said. The spacecraft will crash into the lunar surface shortly thereafter — but not before sending photos back to schoolchildren.

Although the main mission is to map the moon’s gravity field, Grail will accomplish much more than that, Zuber said.

“It’s very hard to get a gravity mission funded. You definitely have to have the big picture in mind,” Zuber said. And for NASA, that can mean much more than just science.