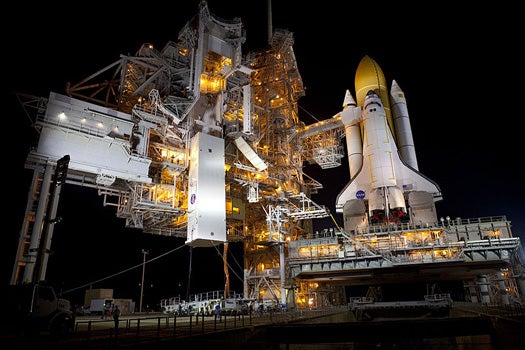 For a nation that prides itself on “firsts,” America’s 2011 is shaping up pretty poorly. Two American firsts will experience their lasts this year: the space shuttles, the first and only reusable space vehicles of their kind, will retire this week, and Fermilab’s Tevatron–once the world’s most powerful particle collider–will cease smashing in September. While all good things must come to an end, neither of these world-beating technologies has a homegrown successor to pick up where its predecessor left off. With regularity, the “firsts” are happening elsewhere these days.

As a popular science writer, I’m naturally inclined toward this kind of Big Science. I like things that are superlative, that are preceded by descriptors like “most powerful,” “first ever,” and “biggest” (and possibly followed by the nouns “laser” or “stealth” or “rocketship/rocketsled/rocketbike”). These things are important not only because they are inherently awesome, but because they inspire the brightest minds in the world to rally around them, they inspire our own young people to engage with science and engineering, and they sometimes spawn entirely new industries. They even “create jobs.”

So where is the Big Science in America in 2011? For all the lip service paid to “Sputnik moments” this year, our new decade still has no Project Mercury. Are we really going to let a relatively routine budget crisis and bureaucratic indifference temper our collective zeal for pursuing big things? Can we afford to sit back and watch Big Science go elsewhere?

I don’t think we can. I’m not writing this out of some uber-patriotic desire for the USA to be the biggest and baddest at all things science and technology. I’m a realist. America can’t do everything, and in fact I think international collaboration is vital to doing truly big things (remember that time we built an international space station?). And I understand that we’re strapped for loose cash.

But if the current spate of regulatory foot-dragging and budgetary politicking persists in conjunction with a painfully slow economic recovery, we could end this decade in the same place we started it while the rest of the world catches up–and then goes screaming past.

So, levity aside, I’ve got a bone to pick with President Obama. This ain’t political. In fact I think Obama started 2011 with the right message, acknowledging in his State of the Union Address that America needs to get seriously invested in research and development, in infrastructure, and in education. He invoked Sputnik and John Kennedy. He sounded serious.

But half a year has gone by, and there’s little to show for this big talk about Big Science. Moreover, those researchers that really want to do big things are finding a bureaucracy that is slow to engage them, less likely to fund them, and often a hindrance to rather than an expediter of development.

Take genetic research. Just last year a two-decade-old University of California project developing transgenic goats that produce inherently anti-diarrheal milk (among the world’s poorer populations, diarrhea is a significant killer of young children) began shifting its technology to Brazil. In the U.S., the research had languished under a politically driven Food and Drug Administration reluctant to make decisions on how best to regulate biotech science (it took them 10 years to issue guidance on the matter), and was scraping by on meager federal grants. Brazil, eager to establish a robust biotech sector, offered them $3.5 million and room to breathe.

This kind of technological exodus isn’t new and happens for a variety of reasons, but it tends to happen most when leaders take the short view. When oil prices soared in the 1970s, the U.S. poured resources into various technologies that might reduce its dependency on OPEC, one of which was batteries. But when gas prices returned to normal, the federal dollars evaporated and scientists abandoned their research. However, the Japanese saw the long-term value and plucked that existing research from the trash heap, building upon it over the years. Now Japan (and other East Asian nations) own the global lithium-ion industry. America scrambles to catch up.

Bureaucratic foot-dragging and budgetary short-sightedness will send our best minds (and their badass genetically modified goats) packing for greener pastures. But Big Science–be it the moon landing or a smart grid or a whole new kind of battery–does the opposite. It ignites our creative engine, generating positive educational and economic feedback loops that fuel it.

It also concentrates intellectual capital. Just look at the Large Hadron Collider: When Tevatron shuts down, the LHC will be a science experiment without any real peers, the sole contender to discover (or disprove) the Higgs Boson and the standard model of physics and who knows what else. Physicists all over the world who want to do Big Particle Physics–including Americans–will go to Geneva to do so.

So what’s America’s next big thing? After the last “Sputnik moment” (the real one) the path forward was clearly defined by the President: go to space and win. We lack that kind of focus these days, but there are any number of Big Science challenges that need to be hacked, problems whose solutions will seriously impact life on this planet. We could even labor to solve one of these Big Problems before the decade is out, for tradition’s sake.

A functioning fusion reactor sounds great (ITER, an international research consortium, is already planning to begin experimenting with a promising design by decade’s end–in France) . So does overhauling the national grid with superconductive materials that presently only exist in laboratory conditions. The Russians have talked about mining helium-3 on the moon by 2020, and nothing stirs up the American competitive spirit like a good contest with the Russians.

What’s important is that it’s big and superlative and a source of international awe. We need to say we’re going to do it, and then we need to follow through. This country needs something that restores our faith in American ingenuity, in our technology economy, and in our ability to do big things. President Obama is absolutely right when he says we’re playing to “win the future,” but it pays to remember that we’re not the only team on the field. If we don’t make the big plays, somebody else will.