FYI: Why Is Bill Clinton So Good at Speaking to a Crowd? 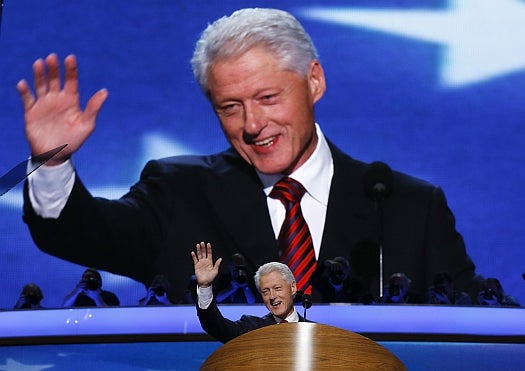 There is a reason why so many of you were enthralled by former President Clinton the other night. It’s the same reason why Barack Obama had a tough act to follow last night at his own convention. The art of speechwriting and speech-giving — and it is an art, no doubt — is also, in many ways, a science. A good speech flows sort of like a backward scientific method; it starts with a preconceived idea, and is supported by evidence reinforcing the idea. And politics aside, there may be no one better at doing this than William Jefferson Clinton.

The best speeches, political or otherwise, follow a set of five basic guidelines, says Greta Stahl, content developer (read: speechwriter) at Duarte, a communications firm that advises TED talkers, CEOs and companies from Cisco to Twitter. “Most great speeches really start with a message, and choose strategically which evidence to cite. It’s sort of the opposite of how you form an opinion,” she said.

Understand your audience and target your words appropriately.

This is actually pretty hard in a political convention, because you’re playing to two separate audiences: The cheering one on the convention floor who will already vote for you, and the one at home, watching on TV, minds maybe or maybe not made up.

“If you think about Mitt Romney, people didn’t really see him as very personable or relatable, so you could see a pattern in all the speeches at the convention that would go out of their way to address that,” Stahl said. “I think why a lot of people think Bill Clinton succeeded was he addressed what people wanted to hear — am I better off than I was four years ago? He sort of started with that question. What do voters think, and what do I need to do to convince them?”

Nancy Duarte, CEO of the eponymous firm, has charted the mechanics of great speeches, including Martin Luther King Jr.’s “I Have a Dream” speech. In the video below, the ebb and flow of ideas — the negative “what is” and the positive “what could be” — are starkly obvious, if they’re not already just by listening to it. There’s a specific structure here, and it’s that structure, Duarte and Stahl believe, that can make spoken words so effective. And yes, Clinton’s speech from Wednesday night followed this structure. More on that in a moment.

Build the speech around a big idea.

Before you can think about structure, you have to have the message, which Duarte and her company call the Big Idea. Everything in the speech is built around that. “For Ann Romney, the message was, ‘Here is this guy who I love and trust, and because of that you should love and trust him too,'” Stahl said. “For Bill Clinton, it was ‘Barack Obama is the better choice for the middle class.'”

Once you’ve nailed that down, step three is the balance between emotion and fact. This, Stahl points out, can get complicated. It’s important to balance anecdotes and personal stories, which can make someone sound more interesting, with some data that puts their story in greater context — but you’d better be honest.

“[GOP vice presidential nominee] Paul Ryan talks about a plant that closed in his hometown, and balances that out with statistics about jobs lost in America. So that works, because it gives you a sense of scale, and it’s personal. Now there’s been some controversy in the press over whether that story was actually true,” Stahl said. “But as a tactic, I think it works.”

Make it your own.

This is where Clinton really soars, Stahl said. The Washington Post notes that the transcript of his prepared speech rang in at 3,136 words, but the former president spoke for 48 minutes and 5,895 words. So that means he made up almost half of it on the fly.

“You have to be a really awesome, comfortable public speaker to do that, and add remarks. It can go really awry if you do it without thinking about it,” Stahl said, noting Clint Eastwood’s mind-boggling RNC speech. “Clinton also has this amazing ability to feed on a crowd — he really benefits from being in a room with 20,000 people. He feeds on that energy and it feels like he’s really talking to them. He’s pretty unique.”

Back to that structure. The this-or-that contrast that finds its model in King’s speech can be found in plenty of political oratory, including Clinton’s talk the other night. It can be very effective as a comparative technique, as Clinton used it over and over. While Obama’s speech last night was notably lacking in the King-like oration that made him so famous, he, too, painted a broad characterization of choice. You can choose, he said, to reduce the deficit without raising taxes on the middle class; to export more products; to improve early childhood education; and so on.

Stahl said speeches that work share this basic form, and she, Duarte and others have found it throughout some of the best-known public talks throughout modern history. The key is to end on the high note, which they call the “new bliss” — show the contrast, and end on “what could be.” Stahl said there is some research to back up the fact that this really works, including psychological studies of storytelling, but she added that sometimes you just know.

“There is some analytical element to it, but there is an element that is emotional, too. It’s something you can see in the audience. When you’re getting a reaction, you can evaluate the speech in terms of, ‘What is happening in that moment, and what made that work?'”

This contrast between the despair of now and the hope of tomorrow, the heart of what makes a speech so effective, has also become the centerpiece of the election. You can vote for them, and get this; or you can vote for us, and get something different. Both parties say it, and it’s true — the candidates have dramatically different ideas, and the parties have different ideas, for how to run this country. Acknowledging those differences is more than just a tactic for a political speech.

Ask Us Anything
politics
Politics & Elections