Hottest matter ever created in a lab; may have induced law-of-nature-warping bubble 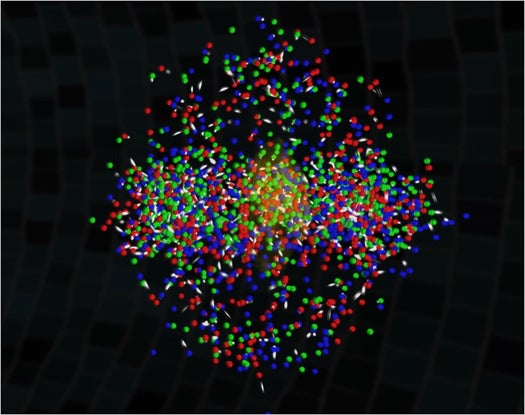 Until the LHC finally gets up to full speed, Brookhaven National Lab’s Relativistic Heavy Ion Collider (RHIC) remains the world’s most powerful heavy ion smasher. And on Monday, they showed off some of that power by announcing that a recent collision resulted in the hottest matter ever recorded. Coming in at a scorching 7.2 trillion degrees Fahrenheit, the plasma not only recreated the environment of the Big Bang, but might have also resulted in the temporary formation of a bubble within which some normal laws of physics did not apply.

The plasma, which was 250,000 times hotter than the center of the sun, seemed to create small pockets where particles lost their left- or right-handed identity. All particles have a specific spin direction that dictates different behaviors, and many chemical compounds have an orientation that makes mirror-image molecules react differently. According to scientists at the RHIC, the creation of these small, transient, bubbles that voided handedness may explain the process by which matter came to outnumber antimatter in the universe.

These results are still controversial, and have not been independently verified with other experiments. In fact, the RHIC researchers were so astonished by their findings that they spent an entire year trying to formulate alternative explanations for their data before publishing their results.

However, if these results are vindicated, the bubbles seem to hint that the laws of physics are not fixed across all space, and could change depending on size and temperature. By better understanding how the laws of physics shifted as the universe cooled and expanded, this could begin to explain a number of questions about the nature of the universe that remain a mystery.