After Thousands of Years of Research, We’re Still Trying to Figure Out Static Electricity

Today in the Things We Thought We Understood But Really Don’t file, a Northwestern University researcher has upended what was... 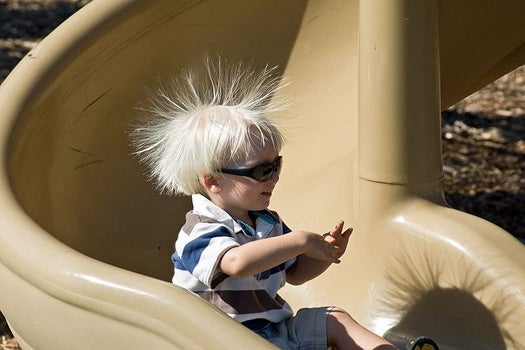 Today in the Things We Thought We Understood But Really Don’t file, a Northwestern University researcher has upended what was previously thought to be a pretty good understanding of how static electricity works. Static electricity goes beyond the usual theory that it’s a simple imbalance of charges caused by the exchange of ions, the researchers’ paper says. Rather, it is the result of an actual transfer of material.

Static electricity has been under investigation for a few millennia now, with research dating back to the ancient Greeks. But the Northwestern team wasn’t convinced that everything was as it seemed. So they applied Kelvin probe force microscopy to the problem, which allowed them to see the varying levels of charge distributed unevenly across the surface of objects.

What they found is that these charges are far less uniform than previously thought, and that clumps of positive and negative charge are strewn unevenly across surfaces. It’s these clumps that are transferred between objects when they come in contact, not just the charges.

In normal human language, that means that when you rub a balloon on your hair to make it stand up, there is a small exchange of matter–tiny bits of balloon actually adhere to the hair, disrupting the electrical patchwork on the balloon and causing that strange attraction between it and other objects that we all know as static electricity.

That matter exchange is proven pretty definitively by this research, but like most discoveries, this one begets more questions. Why do these negative and positive clumps exist, and does knowing that they do exist fully explain the static phenomenon? Scientists still aren’t sure. And that, boys and girls, is why we never stop learning.