Video: What’s Wrong With the “Flintstones” Approach to Braking 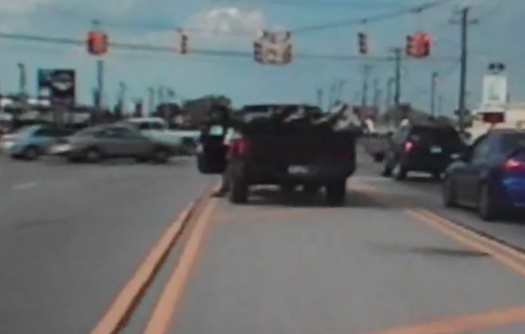 Anyone who has ever seen The Flintstones is probably aware of the unique braking mechanism on Fred’s stone age car. I always considered the technique of dragging your feet on the ground to bring your vehicle to a stop a matter of artistic license. Until last week, when this video appeared. It provides us with an excellent real-world example where knowing a little physics might have prevented this Michigan driver with failed brakes from attempting a cross-town drive using “The Flintstone Technique”, and possibly putting himself in the running for this year’s Darwin Awards.

If it isn’t already obvious that this is not a good idea, let’s apply some simple physics to illustrate exactly why. There are a couple of ways to analyze this, but we will use the concepts of Energy and Work. Basically, the kinetic energy (

) done by friction on the car. To come to a stop:

According to the local newspaper, the driver of the defective truck was travelling at speeds up to 40 miles per hour (or about 18 m/s). Under normal circumstances, the braking distance for a vehicle travelling at this speed is about 80 feet (24 meters). We can solve for the braking force required from the equation above assuming a typical mass of about 2100 kilograms for this kind of truck:

A driver who is not Superman won’t be able to exert 3200 pounds of force on the ground. So, assuming normal human strength, let’s calculate how much distance it should take for his truck to slow to a halt. Resting on the ground, an object will exert a force on the ground equal to the weight of the object (

). However, this guy is hanging his feet out the side of the truck, which is going to make it much more difficult to push into the asphalt. Let’s estimate he can push down with a force about a quarter of his weight. If he weighs 200 pounds, this would result in a force of 50 pounds, or 225 N. We also know that the force of friction (F) between his feet and the asphalt depends on the force with which he pushes down (N) and the “coefficient of kinetic friction”(μ) between the soles of his shoes, which we will assume are made of rubber, and the pavement.

The μ between rubber and asphalt varies between 0.5 and 0.8. Let’s assume a value of 0.7. Therefore, solving for stopping distance, we get:

The situation might be improved if he exerted his full 200 pounds, or 900 Newtons, of force against the ground. In that case:

However, the amount of torque exerted on his ankles and knees might make that a problematic proposition.

Clearly this driver (and everyone within his radius of influence) got lucky as he rolled through red lights, stop signs and other traffic obstructions in heavy cross traffic. With a little knowledge of basic physics, though, he could have avoided an appointment with the Michigan court system, possible jail time, and public ridicule. Remember, friends don’t let friends drive without brakes.

Finally, in case you’re interested, automobile brakes work so well due to the wondrous principles of hydraulics. Because the pressure is the same everywhere within a confined fluid (that’s Pascal’s principle), applying a small force (

) to a small area at one end of the system (the brake lines behind the brake pedal) results in a much larger force being applied at the other end, where the fluid expands to a significantly greater area against the brake pads.