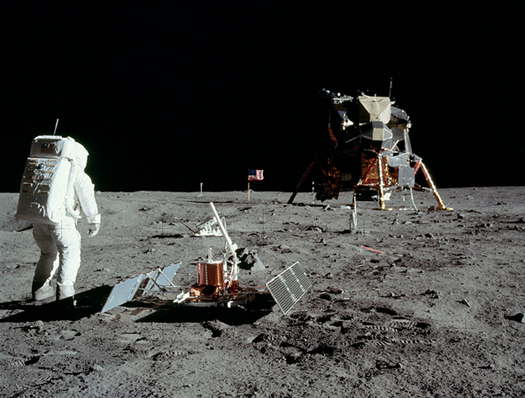 Former astronaut, Apollo moonwalker, geologist and former Senator Harrison Schmitt has a modest plan to solve the world’s energy problems. All we need is $15 billion over 15 years and some fusion reactors that have yet to be invented. And we’ll need a moon base.

Schmitt’s idea isn’t novel–he thinks the U.S. should go back to the moon, this time to mine the surface for helium-3, an isotope of helium that is rare on earth but relatively bountiful on the moon. The Russians have been talking about mining helium-3 from the moon for years, but they’ve never put forth a viable plan. Schmitt thinks his, all things considered, is pretty realistic.

So how does Schmitt’s plan break down? We’ll need $5 billion for a helium-3 fusion demonstration plant, because as of right now no such thing exists. We’ll also need to invest $5 billion more in a heavy-lift rocket capable of launching regular moon missions, something akin to the Apollo-era Saturn V.

A moon base for mining the stuff would cost another $2.5 billion, and though Schmitt didn’t really specify in his recent presentation to a petroleum conference, the other $2.5 billion could easily be chalked up to operating costs in an endeavor of this magnitude.

But it could pay for itself while developing critical spaceflight technologies and enabling a mission to Mars. Schmitt says a two-square-kilometer swath of lunar surface mined to a depth of roughly 10 feet would yield about 220 pounds of helium-3. That’s enough to run a 1,000-megawatt reactor for a year, or $140 million in energy based on today’s coal prices. Scale that up to several reactors, and you’ve got a moneymaking operation.

Why go to all this trouble? Helium-3 is abundant on the moon and produces little to no radioactive waste that must be cleaned up and stored. The reaction necessary would burn at a much hotter temperature than other fusion reactions, but the chance of environmental disaster via radioactive spill is virtually nil. Plus we would establish a permanent presence on the moon.

Throw in another $5 billion, and we might even be able to populate said moon base with a clone work force and some soothing, Kevin Spacey-esque AI.