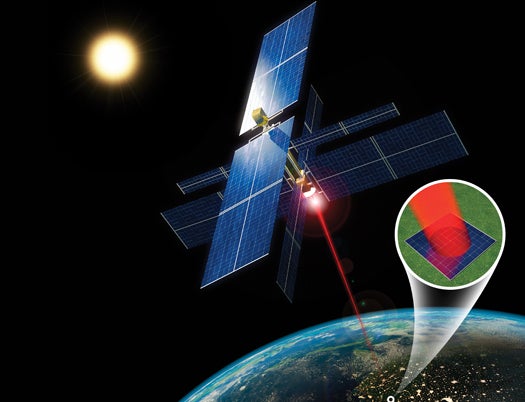 On the ground, solar power has its limitations. Solar cells are not especially efficient. It rains. The sun disappears at night. A space-based solar panel can generate five times the energy of a similar panel on Earth by circumventing both weather and hours lost to darkness. A 2007 study by the National Space Society estimates that a half-mile-wide band of photovoltaics in geosynchronous orbit with Earth could generate the energy equivalent of all the oil remaining on the planet over the course of one year. Though costly, launching working solar satellites is possible today. It’s transmitting the captured energy to Earth that presents a challenge—one that scientists are just starting to work on.

If beaming power from space sounds disconcerting, the concept is remarkably safe and simple. Satellites outfitted with solar panels would gather the sun’s energy 24 hours a day and then convert that energy into an infrared laser beam. The high-efficiency laser would transmit 80 percent of the captured energy to ground-based receivers; one design calls for 60-foot-wide laser beams and 9,700-square-foot ground-based receiving stations. If clouds hinder the beam from traveling though Earth’s atmosphere, the satellite could redirect the energy to other satellites or receivers in the network.

This month, the European space company Astrium will test the feasibility of an infrared laser-based transmission system in Germany. “We are simply looking to demonstrate transfer of power by laser in an eye-safe wavelength, says Matthew Perren, the head of innovation at Astrium. “We’re trying to transmit power at wavelengths that our eyes are not sensitive to, so that you can safely walk through the beam or accidentally look at it.” In 2016, the company plans to launch a preliminary satellite, outfitted with 500-square-foot solar panels, that will transmit a few kilowatts of power to a ground-based receiver. By 2020, Astrium says, it will be running a satellite that can provide 10 kilowatts, enough to power 10 single-family homes.

Meanwhile, the Japanese Aerospace Exploration Agency (JAXA) and the California-based Solaren Corporation are planning to use microwaves to transmit solar power. Whereas the high-efficiency lasers tested by Astrium have only recently become available, highly efficient microwave transmitters have been around for years. In 2008, physicists beamed 20 watts at microwave frequencies from a mountain on Maui to the island of Hawaii, a distance of 92 miles, roughly one and a half times the depth of Earth’s atmosphere. JAXA has teamed up with Mitsubishi and other companies on a $21-billion, 30-year project to launch satellites, each with 2.5 square miles of solar panels, into space. The effort would generate one gigawatt of power, approximately equivalent to a nuclear plant. Solar High Study Group, an independent advocacy group, says there is room in orbit for thousands of these satellites.

If space-based solar-power satellites are launched–a significant “if,” given the political implications of putting lasers in space–the first recipients will probably be research labs at the North and South poles, or other places where power is in short supply. The U.S. Department of Defense has also expressed an interest in transmitting space power to the battlefield, where the costs associated with fuel delivery can reach up to $400 a gallon.

Regarding the environmental effects, Stephen Sweeney, a physicist at the University of Surrey in England who is working on the Astrium system, says it would not heat the planet or change the climate. He also notes that because of the wavelength used in the laser, the beam would not damage any animals that might stray into the beam path.