Why Do Skyscrapers Melt Things?

How did a London skyscraper melt a parked car? 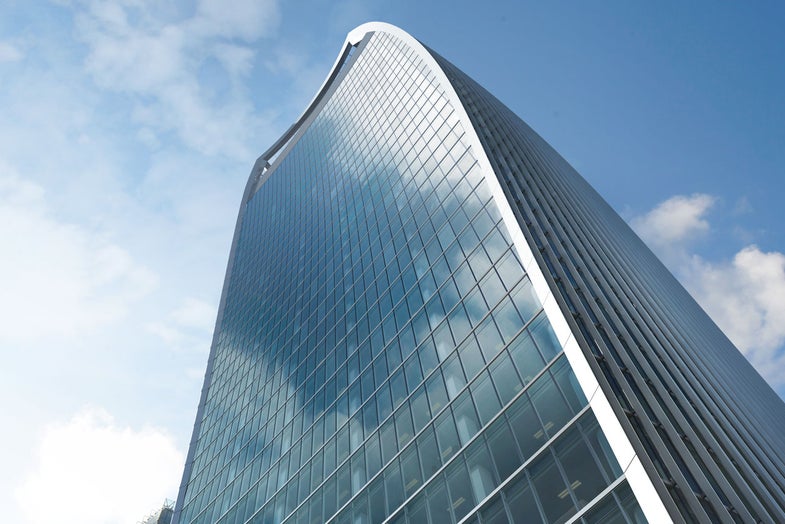 What happened?
Talk about a hazardous parking job. Last Thursday, Martin Lindsay parked his Jaguar XJ across the street from the curvy 37 story, glass-and-steel skyscraper at 20 Fenchurch Street in London, and walked away. When he came back, his car had melted under the brunt of the sunlight reflecting off the still-under-construction building designed by Uruguayan architect Rafael Viñoly.

Parked in the “hot spot” where concentrated light bouncing off the curve of the building shines, the Jaguar’s paneling and side mirror melted. The developers of the building, nicknamed the “Walkie Talkie” for its distinctive shape, agreed to pay for the damages, which amounted to £946, more than $1,400.

How the heck does a building melt a car?

“Fundamentally it’s reflection,” Chris Shepherd of the Institute of Physics told the BBC. “If a building creates enough of a curve with a series of flat windows, which act like mirrors, the reflections all converge at one point, focusing and concentrating the light.”

“If you’re a car parked on the street, there are situations where you get both the direct sunlight you would always get [from the sky], plus the reflected light off the building,” John Frederick, a professor of atmospheric science at the University of Chicago, told PopularScience.com. “That must have been enough to put the temperature in that car over the top.”

Luckily, London isn’t a very sunny city, so this won’t be as much of a problem as it might be in a desert city like Abu Dhabi. The Walkie Talkie’s developers claim this phenomenon will only last for two to three weeks. “The phenomenon is caused by the current elevation of the sun in the sky,” they said in a statement.

Still, melting luxury cars is pretty bad press, so presumably they might want to take action before the problem resurfaces at this point next year. The AP reports the developers will be erecting a “temporary scaffold screen at street level” to minimize damage, but at some point, they’ll need a more permanent solution. To reduce the glare, Al-Kodmany says that there are coats and films that could still be applied to the glass, though the building might not look the same. “They can still probably retrofit the tower with some of these high tech films that would reduce the glare and reflection,” he says. “Of course, they need to consult the architect for aesthetics–it’s meant to be aesthetically unique.”

Has this been a problem before?

Yes, melted Jaguars are unusual.Yes, though melted Jaguars are unusual. Not long after Frank Gehry’s Walt Disney Concert Hall opened in Los Angeles in 2003, people began to complain that the sunlight reflecting off the building’s shiny exterior was making the condos across the street unbearably hot, as well as blinding drivers in nearby traffic. A study from the University of Southern California’s School of Architecture noted that on the sidewalk around the building, “freestanding lightweight objects get hot enough to soften plastic.” The offending panels of polished stainless steel were sanded down in 2005 to dull the glare.

In 2010, employees at the Vdara Hotel in Las Vegas dubbed the south-facing, curved tower the “death ray.” Sunlight reflecting off the hotel’s glass panes reportedly can melt disposable cups and singed the hair of at least one visitor. The building’s designer? Rafael Vinoly–the same architect responsible for London’s Walkie Talkie.

More recently, Museum Tower, a condo-filled skyscraper in the arts district of Dallas, has caused major headaches for the art museum across the street with its massive reflection. The Nasher Sculpture Center contends that intense sunlight reflected off Museum Tower is killing the plants in the museum’s sculpture garden and ruining exhibits. The museum removed a Picasso painting from display over concerns that direct sunlight would damage it, and at the request of the artist himself, closed down the James Turrell skyspace exhibit that had been designed with the site’s pre-condo natural light in mind.

Aren’t there some sort of regulations to keep a lid on this?

Not really, according to Duncan Phillips of RWDI, a Canadian engineering consulting firm that has been involved in coming up with solutions to Museum Tower’s reflection problem. “[T]here are no definitive standards,” he told me via email, though some places, like Singapore, have requirements for how reflective a building’s glazing, a shiny coating that can reduce the amount of heat a building absorbs from the sun, can be. But since those requirements usually only take into account the amount of reflection cast at at 90 degree angle from the glass, they don’t control for reflected light at other angles. “[T]he way you can experience this is to look at a plate of glass head on…and then slowly move to the side and eventually you will see a highly reflective surface,” according to Phillips.

Though the reflected light can create major pockets of heat, glassy skyscrapers are usually thought of as environmentally friendly, because reflecting the sunlight a brick surface would absorb keeps the building cool and air-conditioning costs down. Look at the difference in this thermal image of the reflective Freedom Tower (center) versus the buildings around it:

“As we get more shiny, glassy metal buildings, reflected light will become a bigger deal,” Frederick says. “The high reflection is good if you’re inside trying to keep intense sunlight out, but if you’re outside, you’ll be the recipient of that reflected light.” He suspects that though shiny buildings could heat up other buildings and objects in their vicinity, the effect is probably pretty small in terms of creating an urban heat island effect, which is when urban buildings and hard surfaces like asphalt trap heat, making cities hotter than their surroundings.

But it’s hard to tell how much the light bouncing off one building affects another, since that’s not usually something we measure. “The effect of one building on another building in its vicinity is something that never seems to be discussed,” Frederick says.

So, can I still park my car under a glass building?

Does your parking space look like it’s basking in a weirdly bright, ethereal glow? Does the building have a very shiny concave part? If that’s the case, then no, you probably shouldn’t park your nice car (or anything with plastic parts) there, in the gleam of concentrated sunlight reflecting off it. Especially not if it seems unusually warm in that patch of sunlight, and especially not around noon, when the sun is at its strongest.

Even if you wanted to, the city of London has cordoned off three parking spaces around the Walkie Talkie’s death ray to prevent anyone else’s Jag from melting. Still, anyone dumb enough to park their bike on that stretch of sidewalk might be in for a melted seat.