Last year, after untold millions of dollars, DARPA failed to renew a Lockheed program to design a UAV based on... 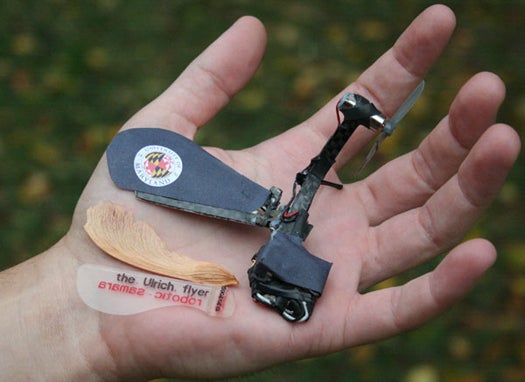 Last year, after untold millions of dollars, DARPA failed to renew a Lockheed program to design a UAV based on a maple tree seed. While that program, backed by tons of cash and one of the world’s largest aerospace companies, amounted to bupkis, a University of Maryland project to create a maple seed UAV has finally accomplished what DARPA and Lockheed couldn’t.

Over the course of about a year, the U of M students constructed a maple-seed-mimicking UAV, camera and all, from $500 worth of parts. The UAV can take off and land safely by itself, but the camera still needs a little work. It uses a battery to power a little propeller and a camera, and is piloted with a radio controller.

I think it’s safe to say that the Lockheed version, a video of which can be seen here, cost a great deal more than $500. To see the University of Maryland UAV in action, along with a history of the project from conception, through testing, to completion, check out the video below. But ignore the music, it’s a little over the top for a science project (what, no Carmina Burana?)