How To Take Photos From the Edge of Space For $150 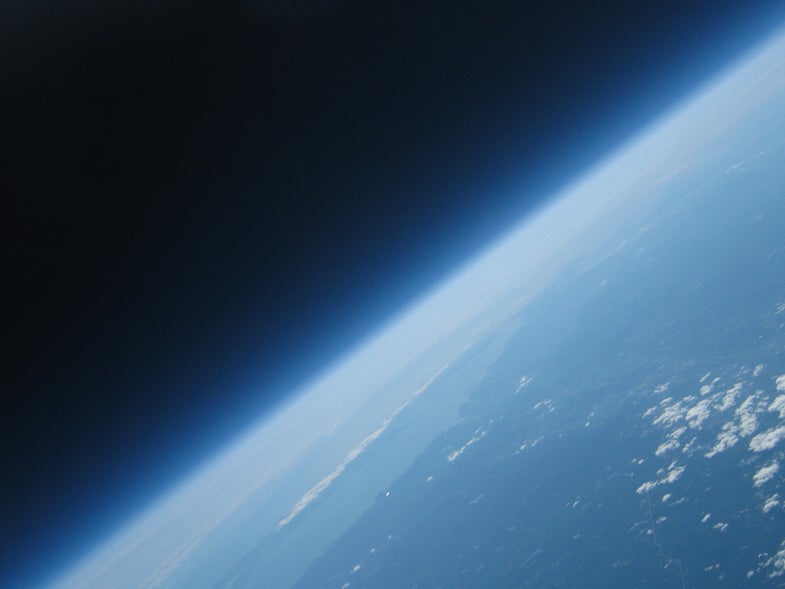 Scientists and students alike have previously launched low-budget balloons that rise to the upper reaches of Earth’s atmosphere, snapping unbelievable photos from near-space. But MIT’s Icarus team managed the same feat using only off-the-shelf items, and for a measly cost of $150. Here’s how they did it.

The MIT students list everything that they used to assemble the launch vehicle, including a prepaid Motorola i290 phone with GPS, a cell phone charger and disposable hand warmers to keep everything operable at the cold high altitudes. Basic materials such as newspaper, zip ties, duct tape and a Styrofoam beer cooler also came in handy.

“We bought a AA-battery cell phone charger to sustain the phone’s power over the duration of the flight, and we used Energizer lithium batteries (rated to operate at temperatures are low as -40F) to power both this charger as well as our camera,” the Icarus team wrote on their website.

A Canon A470 camera loaded with CHDK open source software took pictures every 5 seconds at 1/800 second shutter speed, and permitted the students to capture the balloon’s entire journey from launch to retrieval. CHDK is capable of all kinds of tricks (including the intervalometer , and we detailed several of them here–if you have a Canon camera, it’d definitely worth checking out, even if you’re not planning on shooting from space.

Launch day took place on September 2, 2009 from Sturbridge, Massachusetts. The balloon ultimately reached a height of 17.5 miles at the uppermost part of the stratosphere, before popping and returning to Earth via parachute 20 miles away from the launch site.

Such projects only go to show what ingenuity can accomplish with the technology embedded in items most of us use daily. It also provides some hope for those who lack the funding to tackle a fire breathing robo-beast or personal submarine.