Silk-Silicon Implantable Electronics Conform to Tissues, Then Melt Away

Implantable electronics like pacemakers are old hat, but these kinds of implants are limited by the fact that they must... 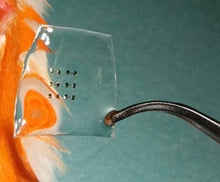 Implantable electronics like pacemakers are old hat, but these kinds of implants are limited by the fact that they must be encased to protect them from the body, and vice versa. But in the quest to make our bodies ever more bionic, researchers have now developed implantable silicon-silk electronics that almost dissolve completely inside the body, leaving behind nanocircuitry that could be used for improved electrical interfaces for nervous system tissues or photonic tattoos that display blood-sugar readouts on the skin’s surface.

Most electronics must be “canned,” or encased so they don’t trigger irritation inside the body, and also so the body doesn’t interfere with the device’s performance. But by building an array of one millimeter-long, 250 nanometers-thick transistors on a thin silk substrate, the researchers have demonstrated that their circuitry is thin enough fly under the body’s immune reaction radar.

The silk-silicon stamp can be laid directly onto biological tissue, like muscle or even brain matter. Wetting the silk causes the structure to conform to the shape of the tissue, blending it seamlessly with the body’s natural designs. The silk then dissolves harmlessly over time, leaving behind a layer of working silicon circuits too thin to cause irritation.

The researchers, which hail from a handful of institutions including the University of Pennsylvania and the University of Illinois at Champaign-Urbana, are now tinkering with electrodes built on silk to serve as interfaces for the nervous system. Existing electrodes, employed in procedures like deep-brain stimulation in Parkinson’s patients, generally sit atop or sometimes pierce the tissue. Arrays of silk-implanted electrodes could integrate better with biological tissues, conforming to the brain’s canyon-esque architecture to reach regions that were previously inaccessible.

The technology could also enhance a variety of existing medical devices that now require “canned” circuitry. Enhanced neurological implants could improve prosthetic device control, and the group is developing LEDs that could act as photonic tattoos that would relay information from inside the body to the surface of the skin. While we’re likely a ways away from customizable LED tattoos of the artistic, cosmetic variety, it’s an interesting thought; and who knows, they may be closer than we think. One of the more convenient aspects of silk-silicon electronics is that silk is already FDA-approved for implants, potentially sidestepping a lengthy approval process.