No stranger to rough landings, NASA just engineered a crash of its own design to test a new crash countermeasure... 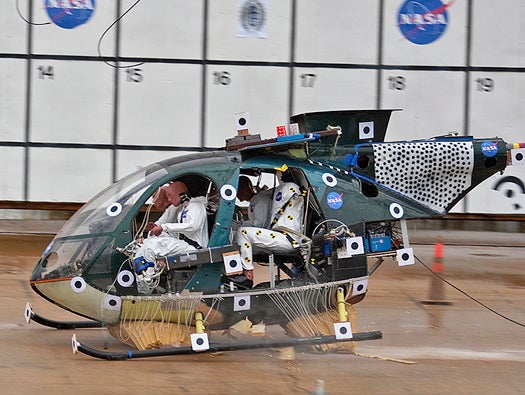 No stranger to rough landings, NASA just engineered a crash of its own design to test a new crash countermeasure for helicopters. NASA dropped a donated Army MD-500 carrying four crash test dummies from 35 feet, to determine whether a new honeycomb cushion made of Kevlar strapped to the bottom of the copter could absorb the brunt of the impact. The result: a more or less intact MD-500, and the cool impact video below.

The helicopter swung by cables from a 240-foot-tall structure once used to teach moon-bound astronauts how to delicately impact the lunar surface. As it approached the ground at a 33-degree angle, pyrotechnics were used to sever the guide cables so the aircraft would impact and react as though in a real crash. All said, the impact simulated a crash landing at about 33 miles per hour vertical speed.

Aside from the test dummies — one of which contained simulated organs within its torso — the aircraft was fitted with instruments recording 160 different channels of data. While all that data still needs to be crunched and compared, the initial outlook appears to be good. As for the dummies, NASA said they appeared “only a little worse for wear.”

The honeycomb cushion was developed as a way to protect the next generation of spacecraft, but NASA quickly realized it could just as well save the lives of aerial travelers here on Earth. Though the skid landing gear took a beating, the deployable energy absorber preserved the MD-500 well enough that engineers plan to recycle it so they can drop it again sometime next year — this time without protection.