After almost 15 years of spying on America’s enemies, and occasionally blowing them up, the venerable Predator and Reaper drones... 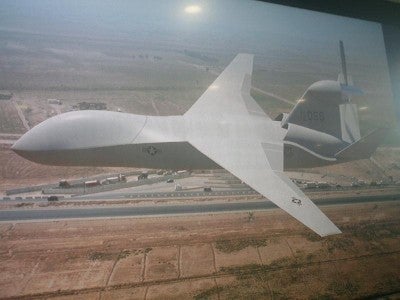 After almost 15 years of spying on America’s enemies, and occasionally blowing them up, the venerable Predator and Reaper drones currently used by the Air Force will have to be replaced, sooner or later. The Pentagon has put out a contract for the next generation of UAVs, and Stephen Trimble of The DEW Line has the first shots of Lockheed Martin’s stealthy entry, the MQ-X.

Other than that, Lockheed hasn’t released any details. However, as noted by the folks at Danger Room, Lockheed seemingly stopped making drones, so the appearance of any entry into this contest comes as a surprise.

Lockheed has some stiff competition in the battle to replace the Predator and Reaper drones. General Atomics, the company that makes the Predator, looks to hold onto its UAV contract, while Boeing, Raytheon and Northrop Grumman certainly want to get into this lucrative market.

The competition doesn’t begin until next year, and even then, the project won’t receive funding until 2012. Ultimately, the Air Force hopes to have this new generation of larger, more capable UAVs in the sky by 2020.

Hopefully, by then they will have solved the “linkage” problems.