A new paper explains how they built the zombie insect 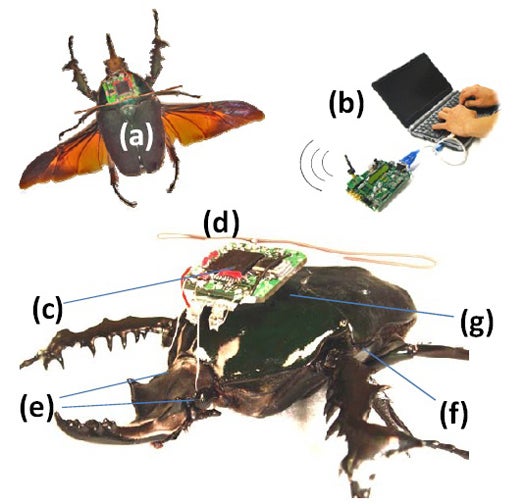 In January, researchers from the University of California, Berkeley, told a stunned conference audience that they had managed to create a remote-controlled cyborg beetle by attaching a computer chip to the brain of a giant insect. Now, the paper explaining how they did it has been published in the journal Frontiers In Neuroscience, and they have released a video of the cyber-bug in action.

The cyborg beetle was designed as part of a DARPA project that looks to equip insects with cameras and other sensors in an attempt to turn them into tiny, biological UAVs. The rhinoceros beetle was selected because, as one of the world’s largest insects, it could carry the biggest payload.

The video below speaks for itself. Zombified with parts available at Radio Shack, the cyborg beetle flies around the room, controlled by a researcher at a laptop.

The day of military-controlled, giant cyborg insects is upon us. Someone call Godzilla, I think we’re going to need some help.