What the "future" of supersonic air travel looked like in 1975 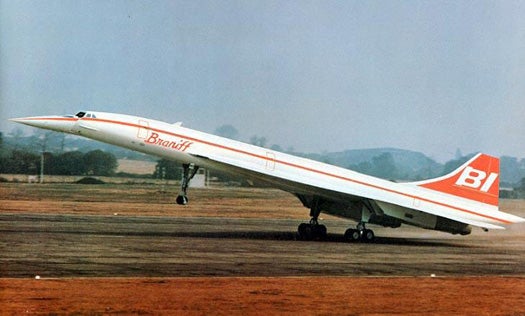 Here at PopSci, we spend our fair share of time marveling at fantastic visions of the future. So as a result, we know better than anyone how fun it can be looking back a few decades at the visions that flew a bit too close to the sun. And that’s what this new series, The Future Then Video (inspired by our magazine’s back page), is all about–taking a look back at retro visions of the future and seeing how their predictions panned out.

In our first episode, we’re looking at an amazing promotional film that Braniff International made in 1975 to get customers excited about supersonic air travel.

Braniff began operating Concorde flight between Dallas, TX and Washington, DC in 1979. These technically weren’t supersonic flights, though — because of noise pollution from sonic booms, Congress had outlawed supersonic service over the domestic U.S. So when the Concorde touched down in DC, the Braniff pilots would swap out for a British Airways crew, who would take care of the fun stuff at Mach 2 over the Atlantic.

But as you can see, that didn’t stop Braniff from portraying supersonic air travel as an amazingly futuristic feat right out of science fiction — complete with silver helmets for passengers, “mood controls” in every seat, and jetpack-equipped flight crews.

Braniff wasn’t totally off the mark, though. Here are the things their cheesy film actually got right (or, at least in the ballpark) about the future of air travel:

Overall, not half bad for a 34-year-old film. Aside from the gratuitous helmets, of course.