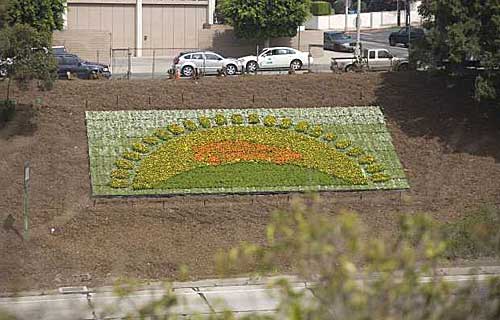 Toyota’s rivals have long complained that the popular Prius hybrid has a less-than-green legacy due to its manufacturing process. Now the car maker has flashed its green thumb by creating two new species of flower that help offset the carbon emissions from the Prius plant in Japan.

The new version of the cherry sage plant can absorb harmful greenhouse gases, such as nitrogen oxide, through its leaves. And Toyota’s variant of the gardenia acts as a natural humidifier by creating water vapor in the air, to help cool the factory grounds, reducing the energy required for air conditioners.

The Age reports that Toyota has made a broader effort to reduce the Prius manufacturing footprint on the environment, and has managed to reduce CO2 from its Prius plant by 55 percent since 1990.

Even the grass grows more slowly thanks to some Toyota tinkering. The new grass variant only requires mowing once a year, as opposed to the old version that required mowing three times a year.

The Prius plant also boasts reflective solar tubes in the place of many electric lights, motion-sensitive lights in the toilet facilities, and an air-conditioning system used in moderation. We’d wager that these efforts may contribute more to Toyota’s greening goal than flower power, but the genetic engineering is still a pretty stunt.

Toyota has recently debuted its plug-in version of the Prius, as a possible counter to GM’s plug-in Volt slated for 2010. No word on whether it’s seriously looking at any challenge posed by the electric Hummer, otherwise known as the “Prius-Stomping Green Machine.”

[The Age via Autoblog Green]