Huge Texas Wind Farm’s Turbines Will Be Made in China

A Chinese wind-turbine company strikes a deal to become the exclusive supplier for one of the largest U.S. wind farms 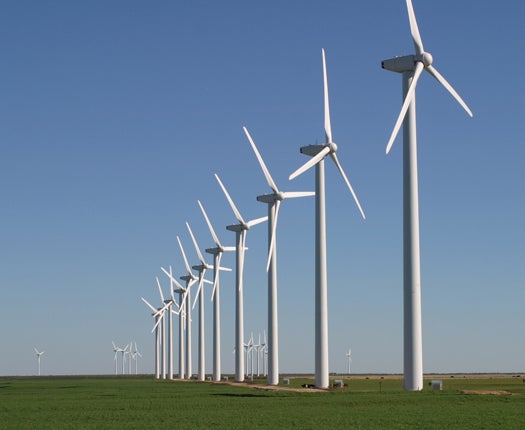 Clean tech has seen a boost as the U.S. pours government funding into renewable energy, and China looks set to reap much of the benefits. Latest example: a Chinese wind-turbine company has just become the exclusive supplier for one of the largest wind-farm developments in the U.S.

The Shenyang Power Group has signed on to supply 240 of its massive 2.5-megawatt wind turbines to a 36,000-acre development in West Texas. The Wall Street Journal reports that the wind farm is also slated to receive $1.5 billion in financing from the Export-Import Bank of China.

This comes as the U.S. has increasingly out-sourced much of its wind turbine development. Less than a quarter of wind turbine components installed in the U.S. came from domestic production, and Europe currently holds the lion’s share of turbine manufacturing. A Norwegian firm launched the world’s first full-scale floating wind turbine this September.

As a reflection of this, just 15 percent of the 2,800 new jobs from the new wind-turbine development will take the form of U.S. jobs. The U.S. government has tried to help the nation’s renewable energy industry with $500 million in grants — but it will likely take a while for U.S. wind power manufacturers to play catch-up after struggling with an uneven market.

Still, this doesn’t mean U.S. companies and entrepreneurs have been complete laggards. General Electric has invested in gearless wind turbines with an eye on tapping the European market, and one of PopSci’s previous Inventions Awards went to the inventor of small wind power rotors.