Harnessing the terawatts of energy we get from the sun 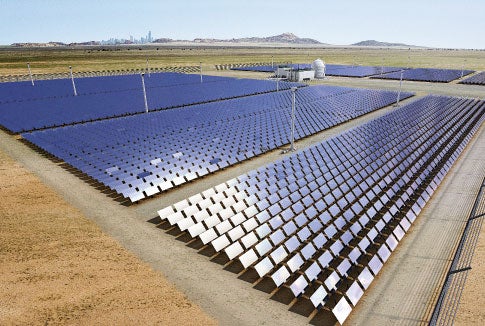 The Big Picture: “Solar power” no longer refers just to chunky photovoltaic panels. A variety of tools for turning sunlight into usable energy — thin-film solar, solar thermal, solar heating, and more — are undergoing a burst of technological acceleration. Whether it’s powering an entire housing development or simply heating your house, taken together, their potential is huge

A shortage of low-carbon power sources seems absurd when you consider that a nearby star bathes the planet in 85,000 terawatts of energy every year. We just have to capture it.

The Google-funded start-up eSolar has devised a relatively cheap and efficient form of solar power by refining concentrating solar thermal (CST), in which large mirror arrays focus light to create heat and ultimately electricity. Proponents say CST can make solar cost-competitive with coal within a decade. It is “probably the only thing that can be done at a big enough scale to produce terawatts,” says Bill Gross, eSolar’s CEO.

At the first eSolar power plant, a five-megawatt facility called Sierra situated northeast of Los Angeles, 24,000 mirrors gather the sunlight falling on 20 acres of land and train it on water-filled boiler units perched on top of towers. This creates temperatures of approximately 850°F, producing steam that turns an onsite turbine to generate electricity.

CST has been around since 1980, but in the 1990s a lack of public interest sent it into hibernation. Now public interest is back in a big way, and CST has awoken with a vengeance. One new megawatt of CST hardware was installed worldwide in 2006; in 2007 there were 100. The Earth Policy Institute projects that the installation of CST worldwide will double every 16 months, from 457 megawatts in 2007 to 6,400 megawatts by 2012. At least 13 plants are in advanced planning stages in the U.S.

ESolar’s approach is comparatively cheap because, unlike most of its competitors, which use large, custom-built parabolic mirrors to capture sunlight from all angles, eSolar uses small, flat mirrors, each about the size of a big-screen television. Computerized tracking keeps each mirror focused at the optimal angle throughout the day. The mirrors are easy to manufacture, and it takes just two workers to attach them to relatively light scaffolding on-site. ESolar’s standard 46-megawatt array, which makes enough juice to power about 30,000 homes, occupies only a quarter of a square mile, which will allow the company to avoid the land-use fights that have ensnared other solar companies.

Sierra is a demonstration project, but in February eSolar signed a deal to build 11 46-megawatt plants in the Southwest, and it is set to build a full gigawatt’s worth of plants in India. “Efficiency wins in every industry,” Gross says, “and it’s going to win in solar as well.”