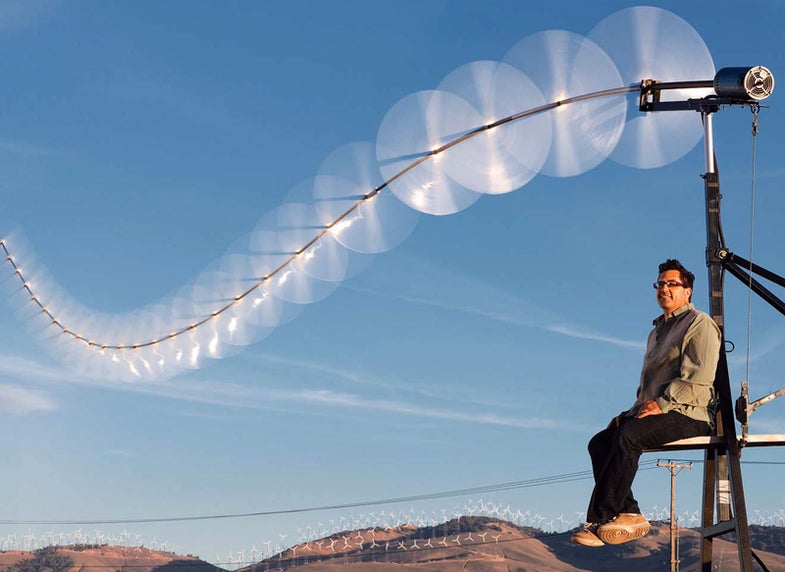 Sky Serpent
Cost to Develop: $250,000
Time: 9 years
Prototype | | | | | Product
Today’s largest wind farms are the size of small towns, made up of turbines 30 stories tall with blades the size of 747 wings. Those behemoths produce a great deal of power, but manufacturing, transporting, and installing them is both expensive and difficult, and back orders are common as the industry grows by more than 40 percent a year. The solution, says inventor Doug Selsam, is to think smaller: Capture more power with less material by putting 2, 10, someday dozens of smaller rotors on the same shaft linked to the same generator.

“The wind-turbine design out there right now is a thousand years old,” Selsam points out, as he lets one of his carved wooden blades speed to a blur in the makeshift wind tunnel he’s made of the alley behind his Fullerton, California, apartment. He brainstormed his multi-rotor approach in the early ’80s, in a fluid-dynamics class at the University of California at Irvine. “The textbook said, this single-rotor turbine design is the most power you can get. I knew then it wasn’t right. More rotors equals more power.” 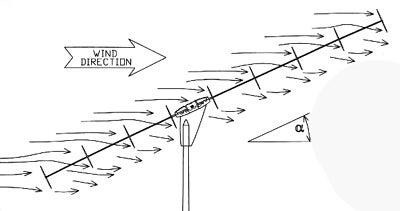 How the Sky Serpent Works

Aligned at the optimal angle, each rotor receives its own wind, increasing efficiency.

Of course, more rotors also means more-complicated physics. The key to increasing efficiency is to make sure each rotor catches its own fresh flow of wind and not just the wake from the one next to it, as previous multi-rotor turbines have done. That requires figuring out the optimal angle for the shaft in relation to the wind and the ideal spacing between the rotors. The payoff is machines that use one tenth the blade material of today’s megaturbines yet produce the same wattage.

Selsam never did graduate from Irvine, but over the next couple decades he kept investigating novel wind designs, and by 1999, after an extended hiatus as a heavy-metal guitarist (he claims that the band Metallica stole its name from his group, Metallix), he turned to wind development full-time. In 2003, he landed a $75,000 grant from the California Energy Commission to develop a 3,000-watt turbine—his seven-rotor design met the challenge—and he has now sold more than 20 of his 2,000-watt dual-rotor turbines to homeowners. He’s built them all in his suburban garage.

“We’ve tested all kinds of wacko things that people think should make a lot of wind energy,” says Brent Scheibel, a former turbine tester for General Electric who now runs a wind-testing facility in Tehachapi, California. “The laws of physics take most of them out of the equation very early. Doug’s idea is one of the very, very few that I’ve seen that actually has a strong chance of making strides into the commercial world.”

Selsam says two rotors is just a start. Someday he sees his multi-rotor turbines stretching for miles across the sky. “We can go big,” he says, “and make turbines using this technique that are way more powerful than anything in GE’s wildest imagination.”