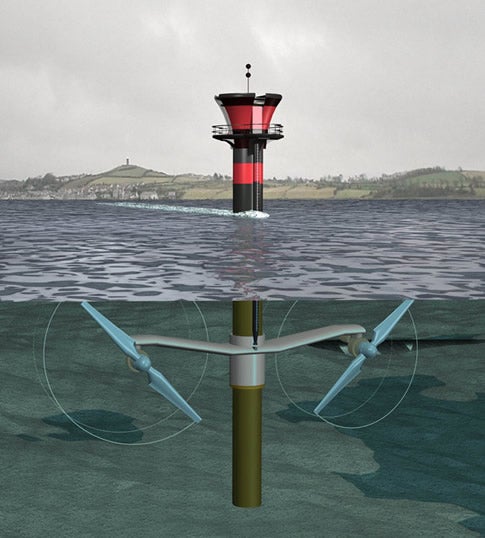 The concept of harvesting the ocean as an energy source is nothing new, but in practice it’s rarely utilized. That’s beginning to change, though. This week, the first major underwater turbine was installed in Northern Ireland’s Strangford Narrows–a body of water known for its fierce currents. SeaGen‘s twin blades measure 52 feet wide, and instead of intermittent winds, this green electricity generator will rely on the ever-changing tide to produce power for around 1,000 homes. Built by Marine Current Turbines, it will be operational this summer.

The blades are designed for bi-directional flow, so that they turn regardless of which way the tide is rushing. They’ll spin 10 to 20 times per minute. The company says this is slow enough to allow fish and other sea creatures to get out of the way if they’re swimming on through. But it certainly doesn’t sound like anything a diver would want to approach.

This Seagen installation may be just the first step. As part of another project, the company is also hoping to install a farm of underwater turbines off Wales that would be capable of powering thousands of homes.