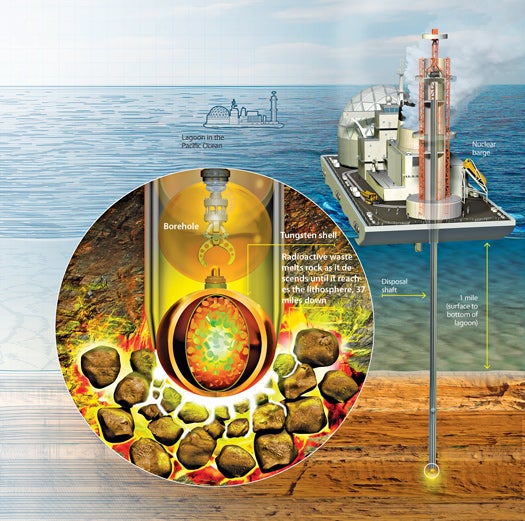 It’s 2070. You’re on a train from New York to Boston. If you could see outside, it would be mostly open landscape. Maybe a nuclear plant or two, but otherwise green space—none of the urban sprawl, wind farms, solar arrays or biomass operations we’ve been taught to expect from an ecologically responsible future. But you can’t see outside, because you’re underground, traveling 300 miles an hour on a maglev train alongside superconducting pipes transporting the energy from those nuclear plants.

This is 2070 as Jesse Ausubel sees it, anyway, and his vision—a brazenly pragmatic one that puts land conservation and energy efficiency above all else—isn’t making him a lot of friends in the environmental movement. “Some of my colleagues have put forth what are called green or renewable solutions or technologies, and they’re OK at a boutique scale—single households,” says Ausubel, who is director of the Program for the Human Environment at the Rockefeller University in New York City. “But when you look at two billion households, you find out that the solution isn’t green at all. Things that work on a boutique scale don’t necessarily work for billions of people and terawatts of power.”

Simultaneously a technology-loving futurist and an ardent naturalist, Ausubel points out that a wind farm delivering the same energy as a 1,000-megawatt nuclear plant would cover 308 square miles; a solar plant, 58. Even organic farming, he suggests, is justifiable in the context of landscape preservation only if the per-acre yields equal those of conventional farming.

Dismissing moves toward renewable and organic initiatives as misguided flies in the face of green dogma. Papers and presentations with titles like “Fallout from Renewables and Consequent Directions for Energy Research” and “Does Climate Still Matter?” haven’t helped Ausubel’s standing in the mainstream green movement.

But although environmentalists may disagree with him, they can’t simply write him off. In addition to his role at Rockefeller, Ausubel is vice president of programs for the Alfred P. Sloan Foundation, where he oversees the Census of Marine Life, a 10-year, 80-plus-nation effort to catalog the biodiversity of the world’s oceans. As a fellow at the National Academy of Sciences in the late 1970s, he was, he says, “one of the first half dozen or so people to be paid full time to work on global warming.” He was also one of the organizers of the first U.N. World Climate Conference in 1979. The man has earned the right to have opinions.

Ausubel has spent most of his career modeling a future that assumes a population of about 10 billion—what many experts believe the world will bear over the next century—and reasoning backward from there to explain how such a world could be powered and fed, and how much land could be spared for nature.

Part of what alarms his critics is how un-alarmist his conclusions have turned out to be. For example, instead of using policy to change how people will behave in the future, Ausubel prefers exploring technological responses to what he believes people are going to do regardless. His favorite defense of this laissez-faire approach is to explain that, absent any policy dictating that it should happen, energy consumption over the past 100 years has steadily “decarbonized.” That is, humankind has moved to fuel sources with progressively better ratios of carbon atoms to hydrogen atoms—wood at 10:1, coal at 2:1, oil at 1:2, natural gas at 1:4 and, eventually (in the future Ausubel envisions) 100 percent hydrogen. He thinks technology inevitably improves things. “That’s not to say I don’t worry about the downsides of technology,” he says. “A lot of my work is about that. But my general interest is new and high-tech ways of dealing with problems.”

The high-tech world in 2070, as Ausubel sees it, will look something like this:

ENERGY: Within a few decades, after methane plants have replaced coal plants, according to Ausubel’s decarbonization model, the move is on to full nuclear. His plants would produce electricity during peak daytime hours and be used to dissociate water to make hydrogen by night. “With the nuclear industry making two products instead of just one,” he says, “the economics become more attractive.”

Where to get all the uranium for the hundreds of new nuclear plants that Ausubel’s world would require? Extracting it from oceans, he believes, could supply enough energy for 10,000 years or more. The low concentrations in seawater—about 3.3 parts per billion—make the extraction process difficult, but Japanese researchers have successfully mined uranium from ocean currents, although not yet at costs that would be economically feasible.

NUCLEAR WASTE: Ausubel cites Russian and British research into “self-sinking balls” of nuclear waste with shells most likely made of tungsten and heated by their radioactive contents to the point where, once disposed of in deep holes in the Earth’s crust, they would melt the surrounding lithosphere and bury themselves several miles deep. “Nuclear waste is hot and heavy,” he says. “The idea of self-sinking capsules takes the heat and gravity as positive attributes. The idea is quite straightforward.”

While the capsules remain theoretical for now, Michael Ojovan, an engineer at the University of Sheffield in England who has published extensively on the concept, says that in addition to removing waste, acoustic monitoring of the capsules could reveal data about the structure of the Earth’s interior. “The [scientific] importance of launching such a capsule is on the order of an expedition to Mars,” he says.

TRANSPORTATION: It’s all fuel-cell cars and planes (using hydrogen from the nuclear plants) and maglev trains. “Take the problem of airport congestion,” Ausubel says. “Having planes take off every 20 or 30 seconds is hard. But you could subtract all those shuttle flights from high-flux routes like New York–Boston by connecting them with maglevs. Put those shuttle routes underground with the maglevs, and save the runway slots for the routes where you can’t justify building expensive tunnels.”

And why tunnels? “I want to leave the surface alone. Disturb it as little as possible.” In fact, he has even proposed dual-use tunnels that would put both the maglevs and the superconducting lines of a future energy grid underground.
Train tunnels, of course, are older than the New York subway. China’s commercial maglev train can zip passengers along at 300 miles an hour, and the U.S. Department of Energy is pouring millions of dollars of economic-stimulus funds into superconductor research. It all comes back to Ausubel’s core concepts: The best way to save nature is to stop extending into it. The best way to limit human encroachment on nature is through hyper-efficient land use. And the best route to maximum efficiency is through technology. “A lot of other people who come from strictly biological or ecological backgrounds just don’t like machines,” he says. “I do.”

architecture
designs
future of cities
future of the environment
july 2010