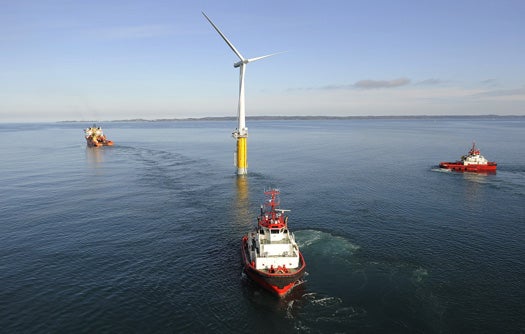 Norwegian oil and gas giant StatoilHydro has inaugurated the world’s first floating full-scale offshore wind turbine, paving the way for deep-water wind farms possessing the dual appeal of being out of sight as well as more efficient.

The turbine, known as Hywind, towers 213 feet above the waterline, but the steel spar on which it is mounted plunges another 328 feet below the surface, where it is anchored to the sea floor by three stabilizing cables. The spar is filled with water and rocks to provide ballast that keeps the turbine from capsizing in rough seas. Located about six miles off of Karmoey near the country’s southwestern coastline, Hywind will serve as a test bed for offshore technologies over the next two years as engineers work on getting the cost of Hywind down and figure out how best to develop even larger deep-water turbines.

Hywind, which was covered in Popular Science‘s “Future of Energy” issue, is a fairly standard 2.3-megawatt wind turbine, but implementing it in such deep water (Hywind can be installed in depths ranging from 400 feet to nearly 2,300 feet, far deeper than existing shallow-water wind technologies allowed) cost StatoilHydro $66 million. Bringing the price in line with that of fixed turbines that are installed in 200-foot depths is one of the goals of StatoilHydro’s ongoing research with Hywind.

If successful, Hywind could revolutionize offshore wind power, especially in countries like Japan, South Korea, the U.S. and Spain, where coastline is plentiful and wind is abundant. The U.S. Department of the Interior estimates the U.S. alone could generate 900 gigawatts off its Pacific coast, but many offshore wind farms face objections from wildlife groups concerned with the effects on avian life along the shores as well as coastline dwellers concerned with their being an eyesore. Hywind could circumvent both problems for the most part, while also proving that it’s possible to place turbines in offshore areas where winds are generally stronger and more consistent. StatoilHydro said the turbine should be producing electricity in the next few weeks.