Rust in the Food Supply 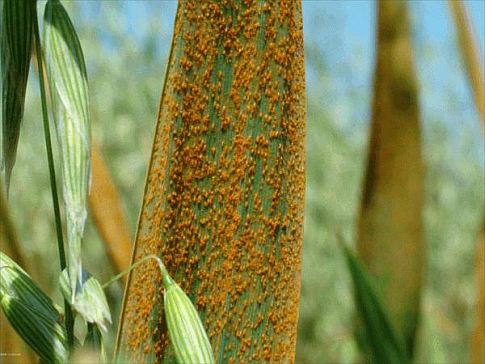 Food-borne illness frequently grabs headlines: tomatoes, peanut butter and, most recently, pistachios have all made people sick from salmonella and caused headaches for grocers across the United States.

Now, another food illness of sorts is popping up on the international radar screen — only this one makes the food itself ill. Well, one of the plants that turns into much of our food, in any case. Scientists from 40 countries on six continents are fighting a virulent form of an old wheat disease that some fear could threaten 90 percent of the world’s wheat crop. They aim to fight the fungus on the genetic level, hoping to prevent it from spreading to North America by replacing much of the world’s wheat varieties with tougher plants.

At a conference in Mexico earlier this month, scientists confirmed that a newly emerged wheat rust strain known as Ug99 is now in most of eastern Africa and is marching toward South Asia, a region that produces 19 percent of the world’s wheat. The wind-borne fungus has already devastated farms in Kenya, where some farmers have reported losses up to 80 percent.

The rust strain, named for its discovery in Uganda 10 years ago, is easily identifiable from the lesions it leaves on the stems and leaves of infected plants. It causes pustules containing powdery orange spores, which form a rust-colored dusty covering on wheat leaves. It spreads quickly and decimates crop yields because it causes infected leaves to die prematurely.

Though the fungus is isolated — for now — to east Africa, the Middle East, and South Asia, most American wheat varieties are susceptible. The U.S. Department of Agriculture’s Agricultural Research Service says plants grown on 75 percent of U.S. winter wheat acreage are vulnerable, including varieties grown throughout the West and Midwest. About 4 million acres of barley in the Midwest are also threatened.

Though crops can be treated with fungicides, researchers think the best strategy is to develop fungus-resistant wheat cultivars, because treatment is expensive and has side effects. Focusing on super-strains has worked in the past on other crops, most notably bananas. In the 1950s, the most popular strain of bananas, known as the Gros Michel, succumbed worldwide to a root fungus called Panama disease. One strain, the Cavendish, resisted the onslaught, and it remains the most popular banana variety in the world.

Though it has plagued farmers for millennia, wheat rust had largely been eradicated in the past 50 years, thanks to new wheat strains cultivated by scientists working with Norman Borlaug, who won the Nobel Peace Prize in 1970 for his efforts. But now it seems the fungus is doubling back, attacking previously rust-resistant strains. Scientists are examining the wheat and fungus genomes to come up with new varieties.

Borlaug now runs a Global Rust Initiative, which hosted a workshop in Ciudad Obregon, Mexico, earlier this month. Researchers and plant geneticists at the conference announced they’ve had some success breeding high-yield wheat varieties that have multiple “minor genes” resistant to the fungus, which could help provide longer protection against rust mutations.

They also plan to use GPS tracking to monitor the rust’s spread into Asia, and agreed to review how climate change impacts the spread.

Ronnie Coffmann, director of the Durable Rust Resistance in Wheat program at Cornell University, said the fight against Ug99 extends beyond the threat to the world’s wheat supply.

“Farmers also need more productive varieties to feed to a growing population, and they will need varieties that can survive any new stresses induced by climate change,” he said.