The Army’s new Arctic vehicle, Beowulf, is made for ice and marshes

The region is warming, and the military wants a ride that can handle all types of terrain. 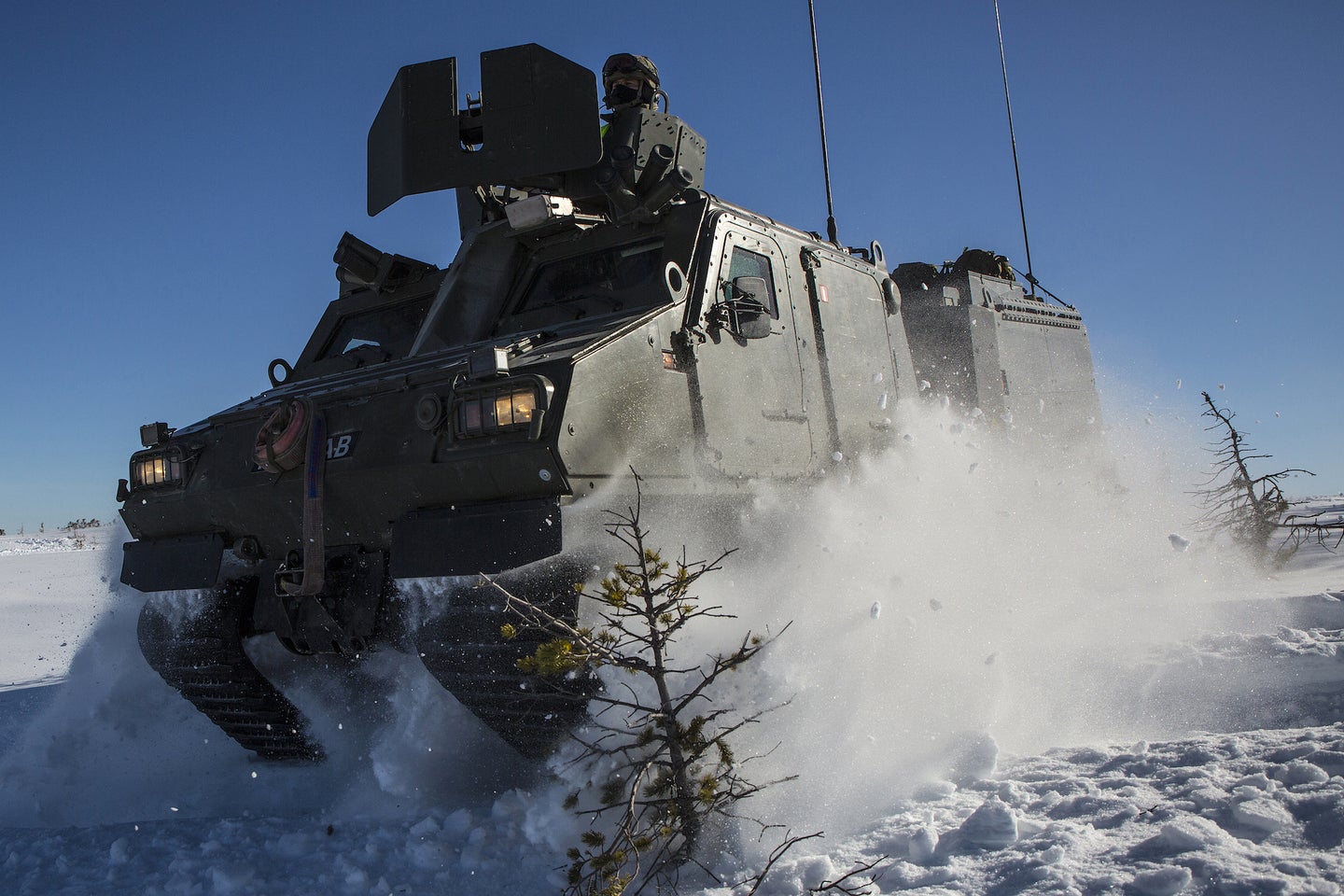 A BvS10, seen here in 2018 in Norway. The Beowulf vehicle is similar, but unarmored. US Marines / Clinton Firstbrook
SHARE

As the Arctic warms, the Army wants a new vehicle for combat over ice. On August 22, the Army announced that it had chosen the Beowulf two-bodied tracked vehicle by BAE systems to fulfill its Cold Weather All-Terrain Vehicle needs. The contract for production is worth just over $278 million, with the stated objective of delivering 163 of the vehicles by 2029.

The Beowulf vehicle has two segments, joined in the middle. Both segments can be configured to carry people as well as other payloads, and having the joint allows for easier movement across uneven terrain while retaining the size of a larger vehicle. It rolls on tank-like tracks.

“Beowulf successfully completed the prototype evaluation phase of the CATV program earlier this year in Alaska,” said BAE Systems in a release. “It performed in multiple tasks while remaining fully mission capable. The testing included amphibious operations, navigating terrain with varying levels of complexity, starting and operating in extreme cold weather, and most critically, user assessment by soldiers.”

The US Army will use the Beowulf to replace its existing and aged fleet of Small Unit Support Vehicles, which are all two-bodied tracked transports used to carry people, cargo, and medical supplies over rough terrain in climates like the Arctic. The Small Unit Support Vehicle was built by Hägglunds Vehicle AB, which was acquired by BAE Systems in 2005. BAE Hägglunds is the maker of Beowulf.

In a 2019 listing outlining what it expected from the Cold Weather All-Terrain Vehicle (CATV) Prototype, the Army stated that the vehicle will be able to carry a combat-loaded infantry squad, perform medical evacuations, serve as communication and command relay, and carry cargo. In addition, the vehicle needed to work on roads and off-road in terrain impassable to infantry without it. This included the ability to drive over “rocky terrain, inland lakes, marsh and muskeg [a kind of Arctic bog], deep snow, ice and operate in extreme cold weather.”

The vehicle design sought under the contract also needed to be light enough that it could be carried by cargo helicopters, and compact enough to fit inside a C-17 cargo transport plane. Wherever cold the Army might be expected to fight, it needed to be able to bring its transports with it.

BAE Systems describes the vehicle as capable of carrying up to 14 people, or a payload of 17,600 pounds, all while moving at just over 40 mph. In practice, and as outlined by the June 2022 solicitation, that will mean carrying a 9-person squad. The Beowulf is unarmed and unarmored, unlike the BAE BvS10 on which it is based, and which is in use by militaries in Europe, including Sweden, France, and the United Kingdom.

In January 2021, the US Army released “Regaining Arctic Dominance,” a strategy outlining how and why the military should prepare for war in the extreme cold of northern latitudes. Part of this is strictly territorial: Alaska is an Arctic state, and any military plan to defend Alaska or Canada (a NATO ally) should accommodate for their vast territory, unique terrain, and specific conditions. Part of it is more broadly geographic: US forces stationed in Europe have long trained for the possibility of defending NATO allies, like Norway, in Arctic approaches. While the 2021 strategy predates the likely ascension of Sweden and Finland into NATO, both countries exist in the Arctic, and Finland even shares a border in the Arctic with Russia.

Beyond present geopolitical challenges, the warming of the planet is experienced acutely in the Arctic, where temperatures are warming faster than elsewhere on the globe. This means that sea lanes, blocked for centuries by ice, are open more of the year, facilitating greater transport, trade, and resource exploitation. It also means that the long winters, normally stable times of heavy ice, are fading faster into the unpredictable weather of spring and summer, where uneven melts and mud make movement harder, especially for wheeled vehicles.

It is with this in mind that the US Army is investing in the Beowulf as a tracked transport that can carry goods and people where needed through friendly countries or across unfriendly Arctic battlefields.

In the 2021 strategy, the Army specifically names the Cold Weather All-Terrain Vehicle as a crucial capability to “improve mobility in an Arctic environment.” The strategy continues, “The Army will continue its plan to replace the existing fleet of Small Unit Support Vehicles to mitigate maneuver challenges of the current wheeled fleet. Additionally, the Army will investigate what further changes to motorized transportation to provide four-season mobility.”

Whatever war in the frozen north looks like, we know that Beowulf will be the cold-weather transport that takes part in the saga. Take a look at the Beowulf vehicle, below.