Three vehicles will replace the Humvee -- and they'll all arrive by air. 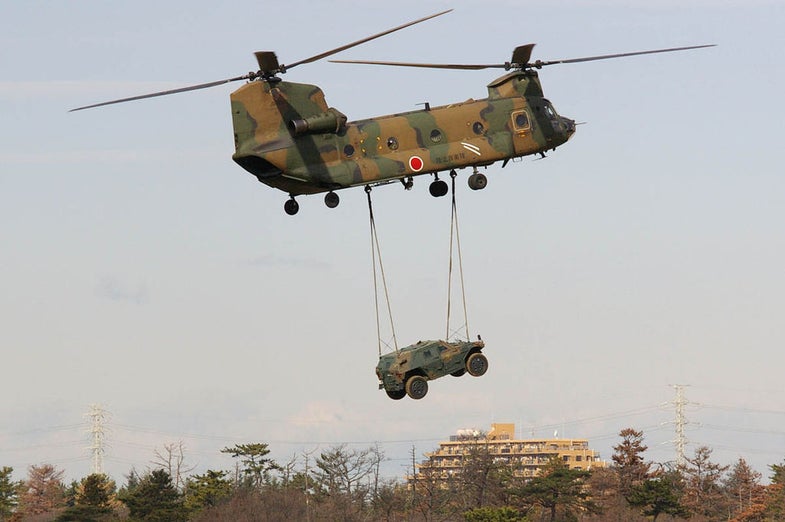 After years of service in wars — from Iraq to Afghanistan to Iraq again — the Humvee is on its way out. Officially named the High Mobility Multipurpose Wheeled Vehicle, (HMMVV) its acronym and stature is so iconic that it launched a series of commercial vehicles. Now the Army wants to fill its light and fast shoes, and to do so, they looked at three different vehicles last week during exercises in Fort Benning, Georgia.

Together, the vehicles would enable the Army to do “forcible entry missions,” which is Pentagonese for “land and operate in a hostile place.” The first vehicle is, in essence, a light tank. Creatively titled “Mobile Protected Firepower” (MPF), it’s an armored vehicle that can be dropped from cargo planes. The United States hasn’t had a light parachutable tank since they retired the M551 Sheridan in 1996, and even then its performance was underwhelming; armor light enough to drop isn’t very protective. (Earlier attempts at flying tanks proved less effective.)

The next vehicles is the ultra-lightweight combat vehicle (ULCV). The ULCV is, in essence, a turbo jeep. It will carry a full nine person infantry squad along with their equipment, up to 3,200 pounds total. The vehicle itself will weigh no more than 4,500 pounds, making the fully loaded and crewed vehicle under 8,000 pounds. It has to fit inside a CH-47 Chinook cargo helicopter, so that the crew can drive right in or out, and the vehicle should drive for at least 250 miles at full weight, while also being able to survive a rollover. The Army also wants it to drive cross-country, primary road, secondary road, and urban rubble during both day and night missions. While the current solicitation for the ULCV doesn’t specify it, a previous solicitation wanted the vehicle to ” to incorporate a medium caliber weapon into squad operations.” In essence, the ULCV should get a squad into the fight right off the helicopter, over unpaved ground, and with a big gun onboard to help them out.

Lastly, the Army is also looking at a light reconnaissance vehicle (LRV), also carried by Chinook helicopters both inside and underneath. The LRV will carry six soldiers and their gear, and it will go on rougher terrain than the other two Humvee replacements. Under the solicitation category “lethality,” the Army says it wants an LRV with the “capability of defeating and engaging hardened enemy bunkers, light armored vehicles, and dismounted personnel in machine gun and sniper positions.” In addition to seeking out threats like that, the LRV, as requested, will go farther than current Humvees, protect against some blasts, work in all weather and with degraded visibility, and defeat outdated tanks.

Together, these vehicles will let the Army arrive from the sky, and start fighting on day one, all while waiting for heavier vehicles and reinforcements to arrive. If they all work as expected, the vehicles would add greatly to what the Army can do early on in a war, with the light tanks protecting the landing zone, the combat vehicle carrying soldiers to the fight, and the light reconnaissance vehicle seeking out hidden dangers.

Of course, the Marines may already be there. Their MV-22 Ospreys can already deploy troops from the sky, and soon they’ll deploy vehicles too.