Oculus Quest brings your real-world motion into VR. Here’s what that’s like.

The next-gen headset is totally self-contained. 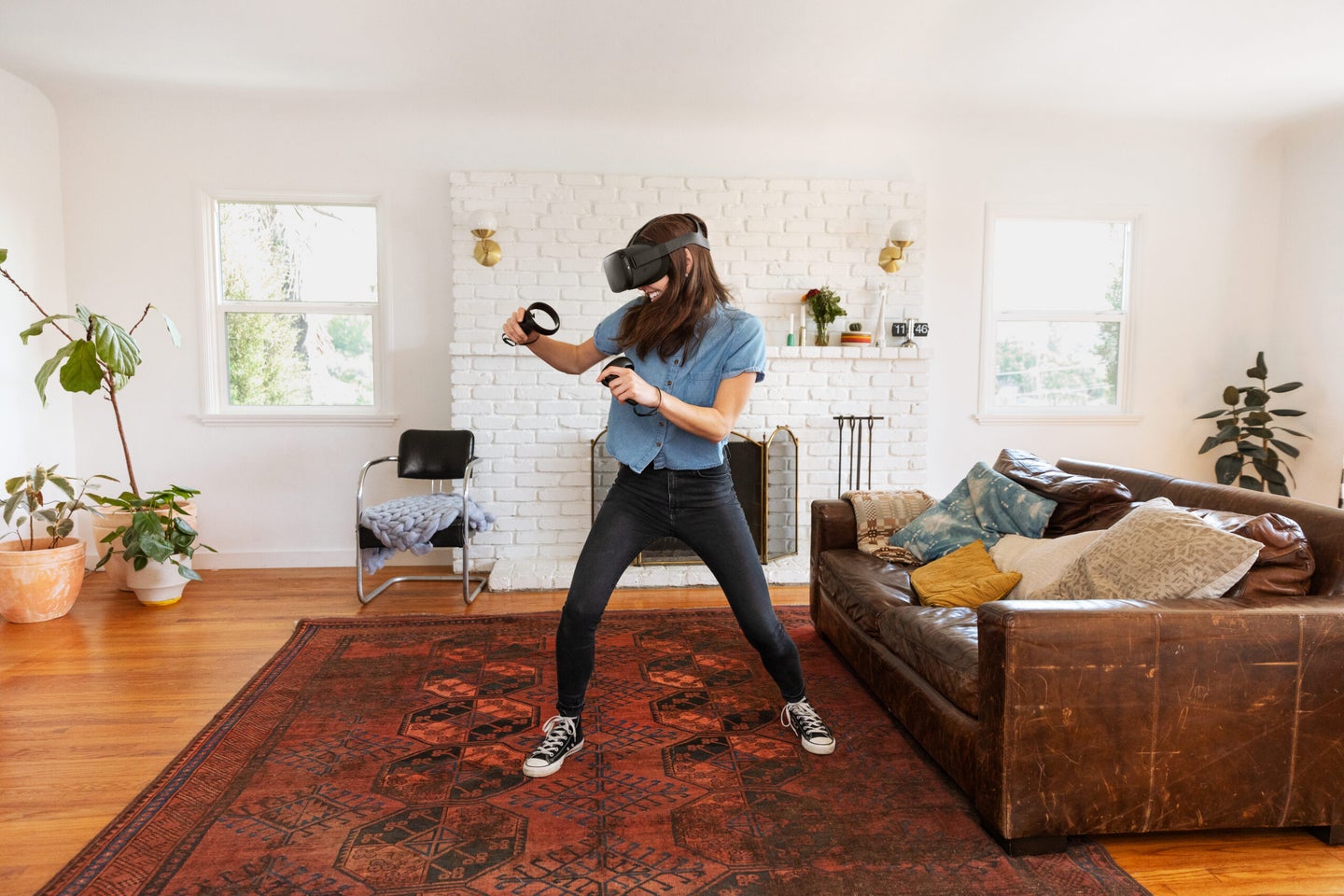 Oculus Quest knows where you are in the room thanks to sensors built into the headset. Oculus
SHARE

Last year, Mark Zuckerberg had an Oprah moment at the Facebook developers’ conference—he gave everyone an Oculus Go, a standalone VR headset that starts at $199. Fast forward a year later, and a new virtual reality device is now up for presale. It’s the Oculus Quest, and the marquee feature that differentiates it from the Go is that it can track your movement by sensing where it is in the room. If you duck toward the floor while wearing it, for example, the same action occurs in the virtual world. We’ve known about this gadget for a while, and it finally ships in May.

There’s plenty to say about Quest, but one of the coolest features is its ability to easily show you the room you’re in. Strap on a virtual reality headset, and you’re normally completely isolated from the environment around you. Want to see the real world for a moment? You need to slip off the headset or peek under it. But the Quest offers something different: move your head through a virtual boundary, and a grayscale version of the room you’re in appears. Move your head back in-bounds, and there’s the VR world again.

The result is, quite simply, very cool—a way to move in and out of a virtual world and the real one, like Star Trek characters leaving the holodeck. That experience is powered by sensors on the outside of the new device, which enable what’s known as inside-out tracking (more on that in a moment). Here’s what to know about the new $399 device from Facebook, which owns Oculus.

For a VR system to know where you are in the real world, it needs sensors. On the old Oculus Rift system—which you had to plug into a powerful PC—those sensors looked like two little microphone stands. They monitored where you were in the physical realm, so if you took a step forward in your living room, the same action happened in VR.

For the Quest, those sensors are now on the headset itself; there are four of them. The wide-angle sensors allow the headset to localize itself in the room in which you’re standing, so it can keep track of its location in space (and also the location of your head). The headset and its accompanying sensors also detect the controllers you hold in your hands. In other words, the Quest tracks your motion like the Rift does, but requires nothing external to work, besides the hand controllers.

Last year’s Oculus Go also doesn’t require a computer—the difference being that the Go has no idea where it is in the real world. Wearing it, you can move your head to look around in VR, but if you were to walk forward while wearing it, nothing would change in VR.

When you start using the Quest in a new space, you set up a “guardian” around you so you don’t do something stupid like walk into a wall or punch your television. If you have a lot of space to work with, you use one of your controllers (while wearing the headset) to draw a virtual line around the perimeter of where you want to play, like you’re shining a laser on the ground. After you do that, a turquoise grid appears as walls around you, marking the edges you just created, like a fence line. That can enable what’s known as “roomscale” VR—the ability to turn a big patch of your room into your VR play arena.

If you have less room, the guardian takes the shape of a narrow cylinder around your body, also in the form of a blue grid. (The previous version of the Rift also had a guardian feature but it was harder to set up.)

Once you’ve set up the guardian and start using the Quest, the blue grid disappears. But get your hand or face too close to it, and it reappears in bright red. (Rift also had that blue, then red, grid in the guardian feature.) With Quest, stick your head through the grid, and you get that aforementioned greyscale view of the real world you’re standing in.

After you’ve set it up, using the headset is easy. I played ping pong against a legless robot, and besides the fact that I need to work on my serve, I had a pretty good time. Because the headset knows where you are, you can take a step towards or away from the ping-pong table, and it knows where your hand is in virtual space, so you can swing your paddle and hit the ball. In other games, you can do things like dodge virtual bullet-like projectiles by physically ducking, Matrix-style.

One downside? You’re going to notice the feeling of the headset on your noggin—it weighs about 1.3 pounds, and besides the straps, all of that weight is hanging in front of your eyes. That’s heavier than the Go, which weighs in at about 1 pound. Your neck strength may differ from mine, but I can’t see myself wearing the Quest for extended periods of time. If you take it somewhere with you but leave the charger at home, Facebook says you’ll get about two to three hours of playtime, depending on what you’re doing. (If you’re looking for a super-portable device to watch content on while you sit on a train, for example, then the Go headset is the best bet.)

The same inside-out tracking system is coming to the next version of Oculus Rift (the headset that requires a PC), so those external sensors are disappearing from the Oculus ecosystem of new products. That version is called the Rift S, and because it plugs into a computer, it should offer better graphics and won’t run out of battery. It will be lighter than the Quest, but cost the same amount: $399.