The company is designing small flying machines in different sizes to deliver your stuff from the sky. 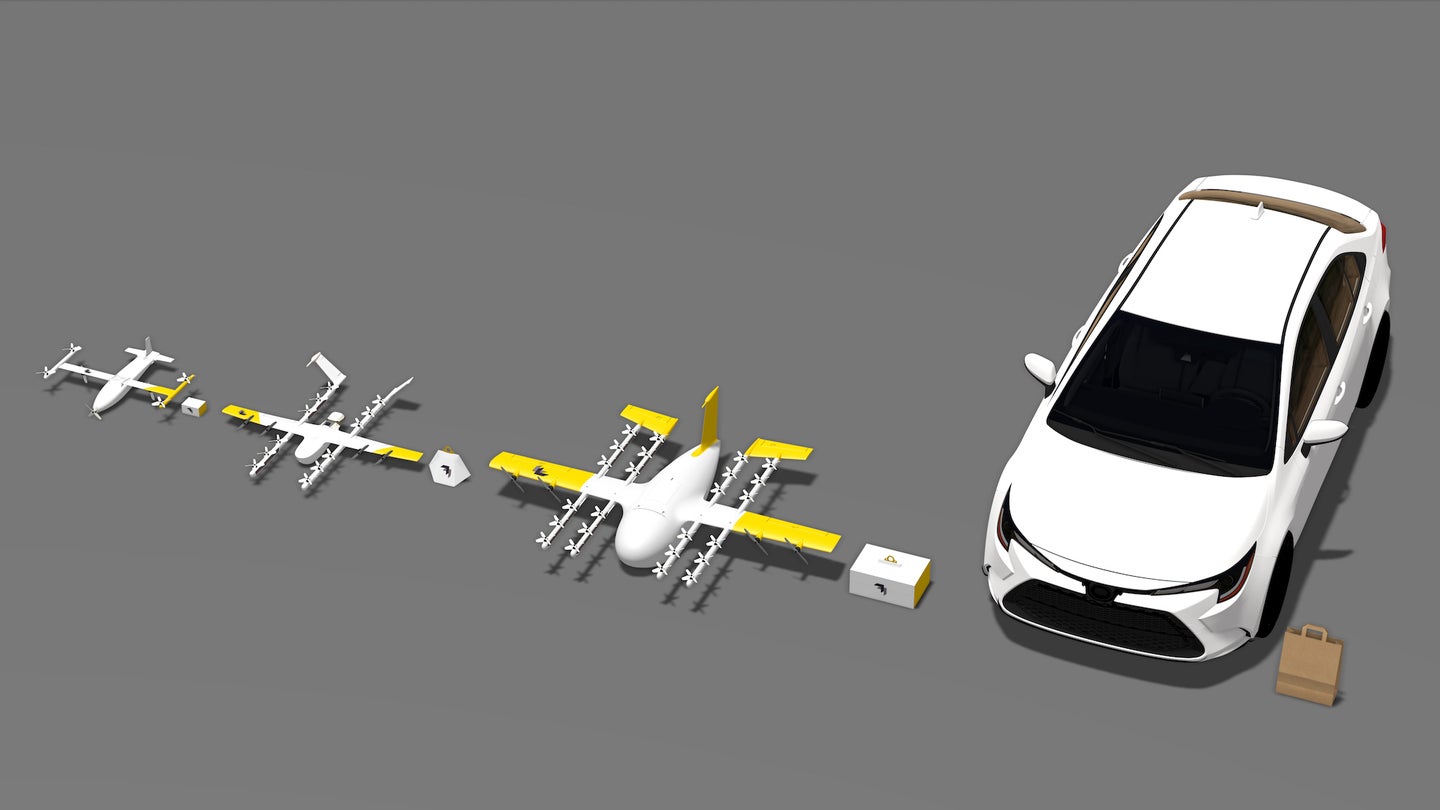 From left to right: A small prototype, the Hummingbird, a large one, and a car. Wing
SHARE

In April, a company called Wing launched a drone delivery service in the Dallas-Fort Worth area in Texas. Wing is owned by Google’s parent company, Alphabet, and uses a small flying machine called the Hummingbird to deliver goods from places like Walgreens, and even ice cream from Blue Bell Creameries.

The Hummingbird drone is just over 4 feet long, with a wingspan of about 5 feet, and many little propellers driven by electric motors. A dozen of those props exist to help the small aircraft hover or move through the air vertically, but four propellers on the wings also help it cruise horizontally to get where it needs to go. (Another version of the Hummingbird has just two propellers for cruise and a shorter wingspan: 3.3 feet.) The craft weighs just about 12 pounds, can carry a package that weighs 2.6 pounds, and travels at 65 miles per hour.

The way it delivers that package to a customer is charming: It lowers it down on a tether, with the contents secured in a small box.

The company now says that it’s working on what it calls an “Aircraft Library,” sketching out new drone designs with different sizes that could carry packages of various weights. Here’s what they’ve got cooking.

One prototype is smaller than the Hummingbird. It weighs about 4 pounds, and would carry a package with a heft of just about two-thirds of a pound. So, this drone size is ideal for transporting stuff from a pharmacy, like a bottle of Advil.

Adam Woodworth, who became CEO of Wing in February, holds up the small prototype (resembling the upper drone in the image above) to demonstrate it in a video interview with PopSci. A propeller at its front is what would pull it through the sky, like you would see on any small airplane. “We have two main lift rotors here,” he says, gesturing towards two gray rotors beneath the craft’s little wing. These do the majority of the lifting work.

[Related: These drones can avoid midair collisions by listening for other aircraft]

At the end of each wing are two smaller rotors, each pair positioned on a little boom. They “work almost like the thrusters on a spacecraft,” Woodworth adds. If the two main lift rotors are helping the machine hover or move up and down vertically, the smaller ones at the wingtips can help with smaller adjustments.

While the main drone in use today delivers packages by lowering them on a line, the small prototype would be carrying such light stuff that it doesn’t need a gentle lowering mechanism. “The package is so light, you’d probably hover over the backyard and drop it on the ground,” he says. That’s fine for a bottle of Advil, but you might not want to order a single raw egg if you could find a purveyor to sell you one.

The larger drone concept has a pleasantly bulbous body, and sports two dozen hover motors on four booms that run perpendicular to its wings. Like with the latest version of the Hummingbird, it has four propellers to give it the horizontal thrust it needs to cruise through the sky. This prototype weighs about 20 pounds and could carry a package weighing around 6.6 pounds.

Woodworth says that like the Hummingbird, the larger prototype would employ the same tether delivery system, although they’re still tinkering with it. “A lot of the work on the big one was figuring out how to get that same system to work,” he says.

In review: The small prototype is good for little pharmacy stuff, and the existing Hummingbird is a fit for transporting “prepared food, and relatively small consumer goods,” Woodworth says. But for the big one, “you’d be focusing more on the sort of things that you’d order online, and expect to get the next day, but you’d get them in a few minutes [via drone].” Examples: a pair of sneakers, or a Wi-Fi router.

Wing is certainly not the only company working in this space: Zipline delivers goods in Arkansas, as well as in countries such as Rwanda and Ghana. It recently developed an innovative way for its aircraft to employ microphones to listen for other planes that could present a collision hazard. Moving way up in size, Elroy Air makes a drone called the Chaparral, which weighs 1,900 pounds. Elroy is teaming up with FedEx for package transport. And companies like Beta Technologies, which is working with UPS, are developing larger electric aircraft that can carry humans or cargo. Finally, Amazon also just announced it will start offering drone deliveries “later this year” in a Texas city called College Station, although that company has had a rough go with their previous drone endeavors.