FedEx will start testing a 1,900-pound drone for hauling packages

Take a look at the Chaparral, a hybrid-electric and uncrewed aircraft that FedEx will explore using for the "middle mile" next year. 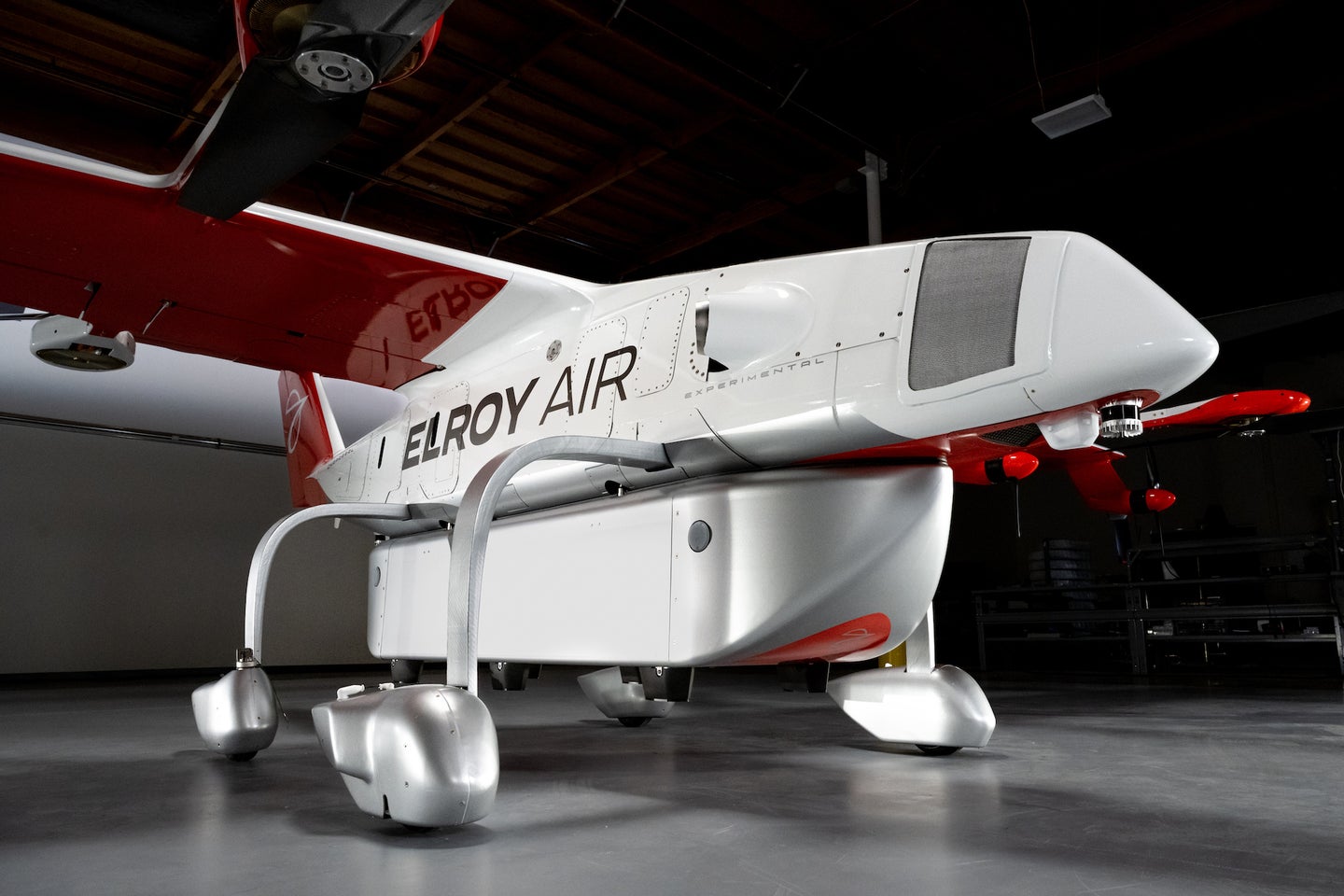 The detachable pod between the landing gear legs is where the cargo goes. Elroy Air
SHARE

Consider the idea of a package delivered by drone, and it’s easy to imagine a small flying machine depositing an item in a consumer’s driveway or backyard. And indeed, that’s what companies such as Wing, from Google’s parent Alphabet, are working on right now. But FedEx, which announced last week that it’s teaming up with a drone company called Elroy Air, has something else in store: an exploration of how to use drones for what they call “middle mile” logistics.

The drone in question is called the Chaparral, which Elroy took the wraps off of earlier this year. Here’s what to know about how it works, and how FedEx is thinking of using it.

The Chaparral isn’t small: It measures about 27 feet across, 19 feet long, and weighs some 1,900 pounds. The wing can be rotated so that the drone takes up less space in storage or transport. If you stood next to the tail, you’d find that it is taller than you, unless you stand about 7 feet in height. The aircraft can schlep about 300 to 500 pounds in a pod below its belly, and has a range of some 300 miles, meaning it could make it from New York to Boston. It’ll travel at speeds faster than 100 mph. The plane is autonomous—no pilots needed—and it can take off and land vertically.

In short, think of it like other large flying machines that companies like Joby, Wisk, and Beta have in development; those craft are called eVTOLS, for electric vertical take-off and landing aircraft. But unlike some of Elroy’s peers in this next-chapter-of-aviation space, the Chaparral aircraft is hybrid electric, not purely electric. It features 8 rotors on its wings to help it take off and land vertically, and four propellers for forward flight, and all of them are driven by electric motors. However, the source of that electricity is what makes this craft unique: it has a gas turbine and generator inside it to make that juice.

Within the aircraft, the gas turbine (it burns jet fuel) and generator produces electricity to feed those electric motors, and batteries inside allow the aircraft to store the juice. “We can actually boost the power that the engine is able to provide for those very high-power-consumptive moments in flight, as well as provide a backup to the engine,” says Terik Weekes, the aircraft’s chief engineer at Elroy.

Kofi Asante, Elroy’s vice president of business development and strategy, argues that the hybrid-electric design is “a pretty big distinguisher for us compared to some of the other groups in the space,” he says. “It gets us the longer range; it allows us to make sure we don’t need charging stations at each one of the locations.” Asante says that the company isn’t just interested in commercial deliveries, but is also pursuing government and humanitarian opportunities. Regions such as West Africa or locales with many islands, like the Carribean, could be places where this uncrewed aircraft could help deliver items.

So what are FedEx’s plans for this flying machine? Joseph Stephens, the senior vice president for global planning, engineering and technology at FedEx Express, says their intentions right now are to start testing out the Chaparral next year. He stresses that they are interested in using it for “middle mile” transport, so that it’s not replacing what the delivery vehicles do on your street. “This is going to be complementary,” Stephens says. Think about a truck delivering packages to a hub for air travel, and then an airplane delivering those packages to another hub: this drone would be used for the middle leg of a scenario like that. FedEx Express operates a range of ground vehicles and aircraft, with their airborne fleet including large planes like Boeing 767 and 777s as well as smaller ones, like the Cessna Caravan 208.

To get a sense of how many packages an aircraft like the Chaparral can handle, picture this: A typical FedEx delivery truck can carry some 700 to 1,000 pounds, so the 300 to 500 pounds the Elroy Air drone can transport represents about half of what a truck like that could carry, by weight.

Meanwhile, the volume of packages that FedEx is delivering increased faster than they thought it would, Stephens says: A previous estimate had forecasted them carrying 100 million packages daily by the year 2026, but he says that they are now predicting 101 million packages per day for this year. That increase is “as a result of the pandemic,” he notes.

Stephens says that they’re still working to determine where they will be testing the aircraft, but cites “remote Alaska” as the kind of place, domestically, that an aircraft like this could be used, perhaps winging packages to a far-flung village. “This would be a perfect opportunity for this particular aircraft, when you want to think in US terms,” he says. And because this drone can take off and land vertically and doesn’t need to be recharged with electricity, it does not need a typical runway or a charging station.

See more about the aircraft, below:

Correction on April 12, 2022: This article has been updated to correct an error regarding the spelling of the name Terik Weekes.