The eStream is designed for the age of EVs, but unfortunately it's not a production prototype. 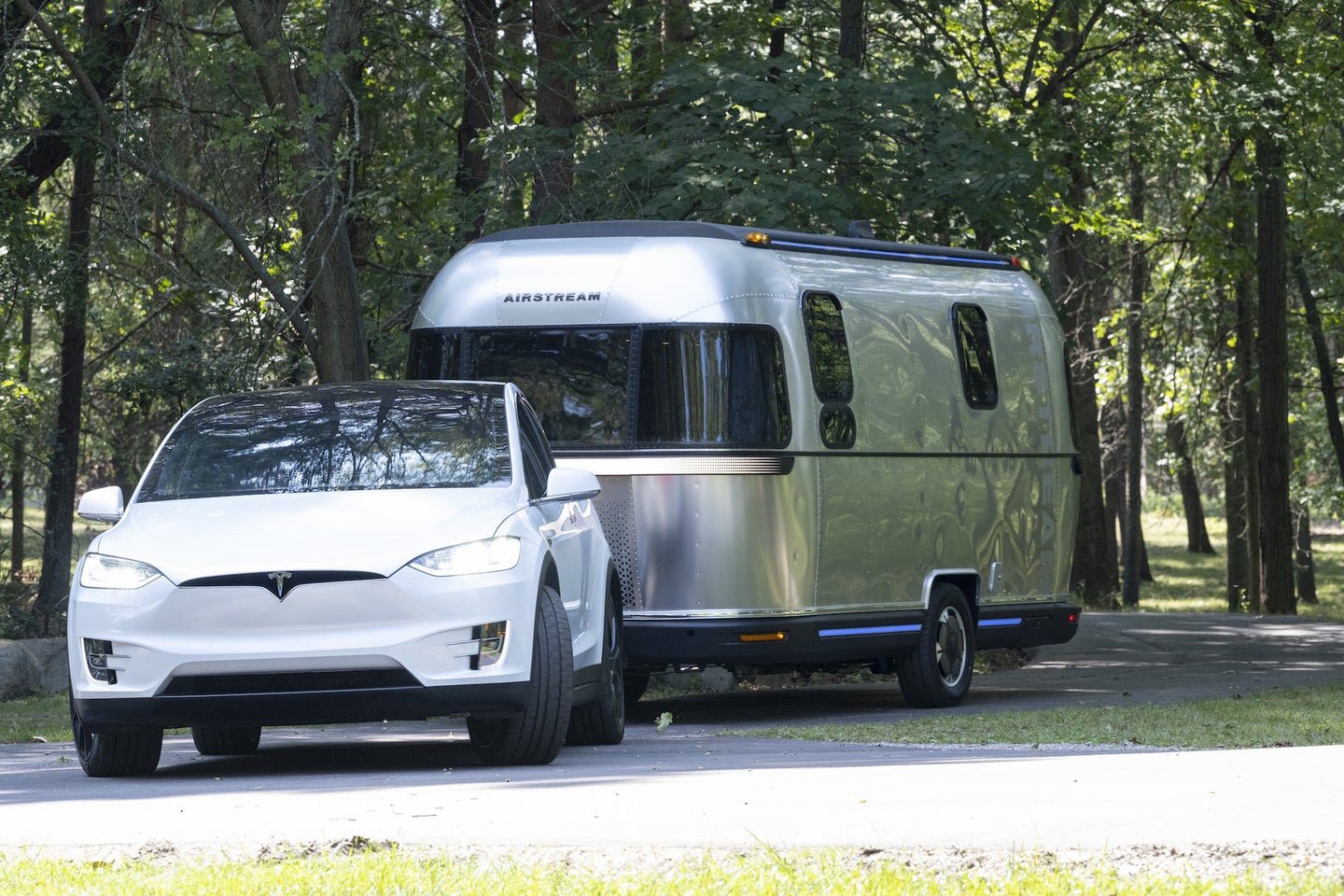 Camping trailers are all the rage as more people have sought an outdoor retreat during the pandemic. But while many might love the idea of towing a camper to the boondocks, in reality, some speed bumps can present themselves along the way.

The thinking is that electric pickup trucks like the Rivian R1T and Ford F-150 Lightning will need trailers that power themselves, because otherwise the trucks’ driving range would be decimated while towing trailers. It is hard to make it to the outback if your EV battery is dead only halfway there.

But along the way to solving that EV tow vehicle problem, Airstream has bulldozed obstacles that can intimidate newcomers. When the trailer gained the ability to move under its own power, it also gained the ability for customers to drive it right up to the tow vehicle’s hitch using an app on a tablet.

Fear backing a trailer? No worries, the eStream can back itself into its spot, also using the tablet app. Worried about loading the trailer for correct balance and stability? “Backing a trailer is one of the most intimidating things for new customers,” observed Airstream vice president of product development and engineering McKay Featherstone during a media roundtable via Zoom. “With one finger you can drive the trailer into a spot.”

Scratching your head at the prospect of setting up a weight-distributing hitch to keep the trailer nice and stable on the highway? (That’s a hitch with torsion bars that link to the A-frame at the front of the trailer leading to the hitch. Those torsion bars have to be set to the correct height and tension to work properly.) Don’t want to learn how to do this? No problem. The eStream uses its drive system to apply its own electronic stability control, so nasty gusts of cross winds can’t destabilize the camper. The weight-distributing hitch isn’t necessary.

That giant battery pack has other benefits. If you really want to take the road less traveled, that means avoiding the campground with the power outlets that provide all the comforts of home while living in the trailer.

With its 80 kWh of juice on board, the eStream can run its climate control system for the whole week. Switch the air conditioning off and the eStream can power its other systems practically indefinitely, thanks to a 0.9-kilowatt rooftop solar cell array that can replenish the battery when it is running lesser loads.

“We know people will travel farther and stay longer if they have all the comforts of home,” Featherstone remarked. “Running air condition, heating, routers; to power all those devices, it is well over a week [of capacity].”

Airstream was inspired to create a self-propelled camper by the emergence of electric tow vehicles. “It goes back to the launch of the Tesla Model X,” he explained. “From that moment until today, we’ve been talking to customers that are towing today so we understand the pain points.”

To minimize the trailer’s need for power, Airstream narrowed the eStream by 8 inches compared to its production campers. They also cleared the roof of its air conditioner unit and other aerodynamic clutter to reduce drag by 20 percent. The A/C now lives under the floor with the battery pack and electric drive system.

How does the trailer know how fast to go? “We had to rethink everything from the ball backward,” said Featherstone. “It is a very sophisticated sensor measuring the forces between the tow vehicle and the trailer.”

Airstream got a boost in its effort thanks to Germany’s ZF, a company long known for supplying automatic transmissions and steering racks for that country’s renowned luxury cars. ZF developed the electric drive system that’s in the eStream with a modular design that can be configured with battery packs of between 20 and 80 kWh.

Like EVs, the eStream can be charged with 240-volt Level 2 AC power through an SAE J1772 plug or through high-voltage DC fast chargers through its Combined Charge System connector. A L2 charger will top off the battery overnight, while a DC fast charger can do the job in 30-45 minutes. Importantly, it also has a power outlet, which means customers can plug in appliances or charge e-bikes from the trailer. Even more importantly, the trailer can be used to power a home in case of an outage.

If all of this sounds irresistible, unfortunately the eStream is only a concept, and not a production prototype. The company says that a product exactly like this is not headed to showrooms, but that they will have models incorporating the features highlighted in the eStream.

It will be up to customers to specify, and pay for, the features that matter most to them on an a la carte basis. So a less-expensive 20 kWh camper will have reduced capabilities, but will be available at a more accessible price. Until those models arrive, we have the eStream concept for inspiration that there will soon be trailers that make life easy for newbies.

Watch an overview of the concept, below: