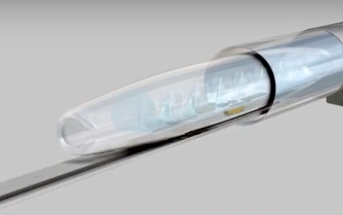 The Hyperloop is an idea proposed by Elon Musk, a closed transportation system that would send pods hurtling through tubes at incredibly high speeds, providing an alternative form of transportation beyond the typical trains, planes, and automobiles. The only hitch? It hasn’t been built, or even fully designed, yet.

There are a variety of companies working on Hyperloop designs, and many of them are starting with maglev technology, a design that uses electromagnets (and usually a charged track) to levitate a train above a track, reducing friction, and letting it move faster. Maglev trains already exist in Shanghai and a few other locations.

Instead of electrifying the track, the pods will contain a battery that will power the motors and help induce a magnetic field that will interact with wire coils in the track. The magnetic field will help the pod levitate while the pod is moving at speeds over 20 miles per hour. Watch the video above for more details.

The company hopes to eventually attain the top speed proposed by Musk, 760 miles per hour, with its design, but details remain elusive.

For comparison, that’s faster than the winning pod design submitted by an MIT Team to an unrelated Hyperloop competition in Texas earlier this year. The MIT pod design currently maxes out at 110 meters per second, or 249 miles per hour, but all of the teams and companies working on Hyperloop projects are always hoping for the next fast thing.

The Verge reports that another Hyperloop company, Hyperloop Technologies Inc. are planning on making an announcement on their own type of Hyperloop technology in Las Vegas this week.